Several weeks ago I reported on the moving of Record Store Day 2020. However, after having announced a new date the beloved ‘holiday” that so many of us celebrate has once again been altered.  Many of the stores involved with this have their own rules and regulations as to how they can and cannot conduct business, therefore this has to be approached from a different perspective and I think this was a good choice.

To be honest, this will be three different days of celebrating small businesses instead of just one. Many states have so many different laws and rules that they will be dropping on three separated weekends in the year of 2020. As I have previously stated in many of my recent articles I have a strong suspicion life will never return to the echelon it once was.

Just about every festival has been postponed or cancelled to next year, and we see very little hope for big major shows to come back before mid fall of this year. Most of us have turned to podcasts and videos of our favorite bands we love,  and continuing to enjoy new release albums of 2020.

So with that in mind let me release to you, my dear readers just exactly what I know about Record Store Day this year: Since 2008, Record Store Day has grown into the world’s largest single-day music event, shining a light on the culture of the indie record store across the globe. In 2020, that world is different, so Record Store Day will be too. RSD is now scheduled to be celebrated with special, properly distanced release dates on Saturdays in August, September and October.

Record Store Day will look very different this year, but supporting indie record stores may be more important than ever. We don’t know what sort of rules will be in place, or what sort of gatherings people will be in the mood for this year, so we’re focusing on the music and getting the really great titles on the RSD Official List this year into the stores and into your hands, in the most financially and socially responsible way.

The titles on the RSD 2020 Official List, launched on March 5th, will be released at participating record stores on one of these three RSD Drops: August 29th, September 26th, and October 24th.   The new version of The List, with newly assigned RSD Drops dates will launch on June 1 so check back here for a look at when you’ll be able to pick up the titles on your RSD 2020 wishlist at your local record store. 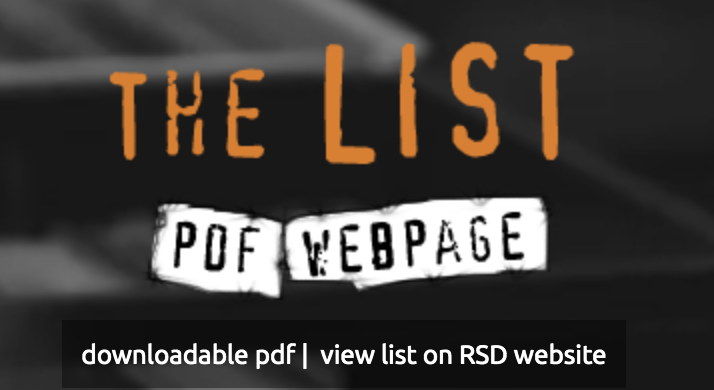 See all the special releases coming to record stores on 4/18 as part of Record Store Day!