20 Years Of Bloodshot Records Brings us “While No One Was Looking”. 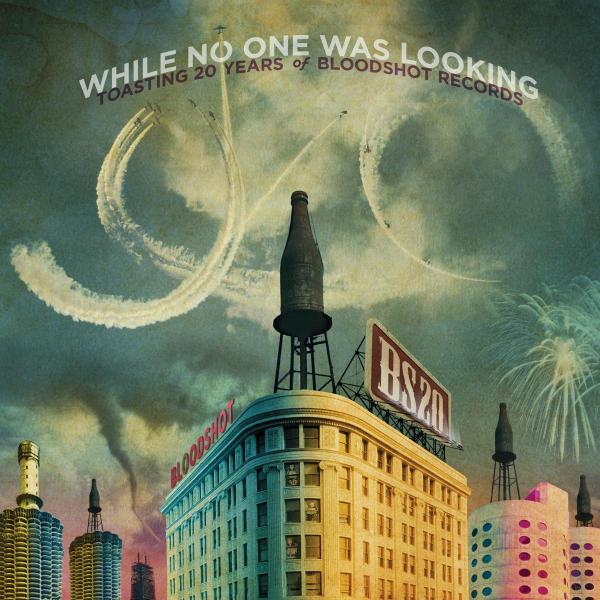 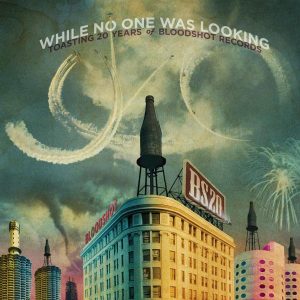 We all have different answers concerning what label started the whole independent movement.
Some call it the “Roots Music” movement or “scene”..I don’t know folks.
I DO KNOW that Chicago’s own Bloodshot Records was the label that introduced me
to a boatload of the artists I feature on here, and have loved for years!
It introduced me further to Wayne “the Train” Hancock with it’s release of “A Town Blues” and
“Swing Time”. Both were classic albums in my collection.

The Dirty O’l One Man Band…none other than Scott H Biram also was introduced to me by
being a frequent Bloodshot Records lover.
And last year he released “Nothi’n But Blood” which was indeed a classic album of 2014.
I highly suggest you listen to that album as soon as possible.

Recently they released the LIVE Whitey Morgan album which i watched FLY OFF the merch shelf last weekend at the Exit In.
He performed a stellar show and you can read more about that HERE.

I also got into independent music from Moonshine Willy and The Bottle Rockets whom are both
on this label.
When I first moved to Nashville the Bottle Rockets tore up several venues I attended.
And later on I got into Eddie Spaghetti and Justin Townes Earle.
Earlier on I got into Split Lip Rayfield as well, and their live shows were some of
2004’s top shows along with Jason and the Scorchers and BR5-49 (who were NOT on this label).
Now in 2014 they bring us “While No One Was Looking” toasting 20 years of Bloodshot Records.

THIS IS why I started my website..this is why I do what I do. Because there aren’t a whole
list of many websites that DO tell you about independent music. I could name about ten!
The underdogs and the little guys are what Bloodshot Records is all about.
If YOU want to be part of the solution of what’s wrong with Music Row then support this
label and ALL OF THEM that release the independent music.
DON’T sit behind the social media and gripe….I WANT to see YOU at a venue!

This album is a two CD set that comes complete with a booklet and they are selling
shirts and other things on their website.
Here is a complete list of tracks:

2. Chris Shiflett & The Dead Peasants – “Look the Other Way”
Originally performed by Justin Townes Earle on BS193 Nothing’s Gonna Change the Way You Feel About Me Now (2012)
(Shiflett is the lead guitarist of Foo Fighters and Me First & The Gimme Gimmes, formerly of No Use For a Name.)

5. Hiss Golden Messenger – “Where I Fell”
Originally performed by Robbie Fulks on BS211 Gone Away Backward (2013)

15. The Minus 5 – “Cherokee Grove”
Originally performed by Mark Pickerel and His Praying Hands on BS146 Cody’s Dream (2008)
(The Minus 5 is somewhat of a “supergroup” featuring Scott McCaughey and Peter Buck of R.E.M.)

19. The Reverend Peyton’s Big Damn Band – “St. Nick on the Fourth in a Fervor”
Originally performed by Ha Ha Tonka on BS145 Buckle In The Bible Belt (2007)

4. Superchunk – “Come Pick Me Up”
Originally performed by Ryan Adams on BS071 Heartbreaker (2000)

7. Mike Watt & The Missingmen – “Up to My Neck In This”
Originally performed by Jon Langford & The Sadies on BS092 Mayors of the Moon (2003)
(Mike Watt is a legendary punk bassist and vocalist who has been a member of The Minutemen, Iggy & The Stooges, and Hovercraft (w/ Dave Grohl & Eddie Vedder).)

11. Warm Soda – “All Grown Up”
Previously performed by Gore Gore Girls on BS142 Get the Gore (2007)
(Warm Soda is a band led by Matthew Melton, former frontman of Oakland garage-rockers Bare Wires.)

15. Kevin “Shinyribs” Russell – “All the Time”
Originally performed by Lydia Loveless on BS214 Boy Crazy (2013)
(Kevin Russell is the former frontman of The Gourds.)

16. The North Carolina Music Love Army (featuring Caitlin Cary, Chip Robinson, and Kenny Roby) – “Stick to the Plan”
Originally performed by Graham Parker on BS140 Don’t Tell Columbus (2007)
(Caitlin Cary is the former fiddle player and vocalist of Whiskeytown; Chip Robinson is the frontman of Backsliders; and Kenny Roby is the frontman of 6 String Drag.)

17. William Elliott Whitmore – “I Wish I Was the Moon”
Originally performed by Neko Case on BS099 Blacklisted (2002)

Just a few footnotes here off this tracklist.
“Truck Driver” is one of my favorite songs Scott H Biram does, and I think
it was re-done really well on this album.

PBPJ (Possessed By Paul James) is one of my favorite people on the independent
touring circuit. He is currently on Hillgrass Bluebilly Records and his release
“There Will Be Nights When I’m Lonely” was also a MUST HAVE in your collection.

So go ahead and order this album HERE.