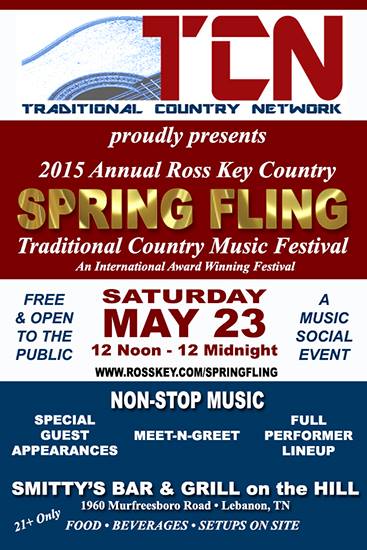 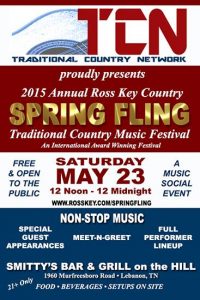 Folks I’ll be honest Ross Key’s Spring Fling is JUST THE TYPE of festival I REALLY LIKE to cover and cover it I SHALL..in fact I’m on vacation that week. So I’ll be there for sure and I’ll be checking into how much I will need for a small tent down there. I MIGHT have a spot out here if it’s not too late to get one form them. Regardless THIS IS the type of local country music I LOVE to cover. This festival is close to my home and I GOT ROOM at the house for you! 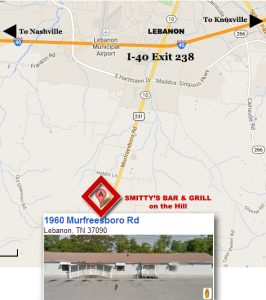 Saturday May 23rd at Smitty’s Bar And Grill On The Hill in Lebanon Tn this festival will be hosted by Ross Key whom I met last year at R.,O.P.E. We got to talking and he invited my website out for some music so I said HELL YES and hey you can NOT BEAT the price….FREE! You know what, this is a great opportunity for me to point out something. When there are FREE community festivals like this one BUY MERCH from the performers, find a few you like and BUY CD’s and stuff from them!

Now I will say that I met P.J.Steelman last year at another festival and we had a good time together and I look forward to seeing him again. I will be researching some of the other performers and I will be contributing to this event in many ways. You know honestly I like to write my own information on these as much as possible BUT his bio was so interesting I just would like to re-print it here.

Born and raised in Lynchburg, Virginia, Ross Key was born with a God-given musical talent. While he will tell you he had to work at learning each instrument he plays, he easily acquired the basics of music. Until 2011, Key lived within a 20-mile radius of his hometown. Key’s paternal grandparents told him he was a direct decendent (6th/7th generation) grandson of Francis Scott Key, the author of our nation’s National Anthem, the Star Spangled Banner. His uncle, Tommy Dunaway, played in the band with Mel Tillis, so as a child, he was exposed to the world of country music. Key recalls meeting Tillis’ daughter, Pam, when they were both small children.

Ross was given his first guitar by an older brother at age 12 and by 15, he was teaching guitar professionally at a local music store. He had his first paid, weekly gig by age 15 with his band, Key and the MasterLocks. He performed live on a local Jerry Lewis Telethon, and hired to perform at a McDonalds’ Grand Opening at that age. At age 16, he traveled Europe with the Boy Scouts of America, performing before King Gustaf of Sweden, which earned him a private audience with the King. He also performed before other political figures of that time throughout Europe. Key earned his Third Palm Eagle Scout badge by age 18.

A versatile musician, Key is an established professional entertainer, singer/songwriter and musician, incorporating his own material into his show which has garnered much attention from local and regional venues, radio stations, A&R’s, and record companies. Versatility coupled with a unique and distinctive style of his own, Key maintains a firm grasp on country music as it was performed by country music legends decades ago. His vocals range from soft and rasping to a hard, driving sound that creates an air of originality. Unlike many in his field, Key doesn’t duplicate or mimic. He makes each song his own, performing those songs that touch his heart in some manner. Key opens every show with his signature song, “Under The Double Eagle”, capturing the attention of audiences wherever he performs.

Key held the #1 spot for 24 months on ReverbNation’s local country music chart with his song, Saturday Night, and maintains a growing international fan base. Saturday Night still holds the #2 spot on his hometown country chart. In March and April 2011, Key debuted his talent in Nashville for the first time, performing in prestigious venues such as the Nashville Palace, Bluebird Cafe, and The Listening Room. However, it wasn’t until he attended a jam session in Lebanon, TN that he caught the attention of the then recently inducted CMA Hall of Fame, multi-platinum songwriter, Roy August. To-date, the pair have co-written songs for Key to record on a forthcoming album. His four week debut turned into a six week stay, having to return for another two weeks in May and June. In July 2011, Key officially moved to Nashville, leaving his native Lynchburg, Virginia for the first time.

Key holds a degree in Drafting and Architectural Science from the University of Virginia, Charlottesville, Virginia. He is a master carpenter, plumber, and electrician.

Now folks there are MANY hotel accommodations off exit 238 and I-40. I shall list them on here for you
on here: