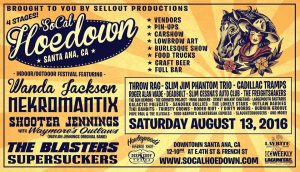 The So-Cal Hoedown is going to be a really huge 4 stage outdoor festival, that will be coming to the streets of downtown Santa Ana California. One of the differences about this particular festival is the fact that ALL of the acts I will include on this roster will all be performing the same day, August 13th.

Another distinctive quality about this festival was the reasonable price of 25.00 for general admission, 45.00 and 55.00 for the premium VIP package. As always I’ll be including a link on here for you to buy tickets HERE.

Here is the lineup for this festival this day:

Event is located in Downtown Santa Ana – The event entrance is located on French St at the corner of 4th St.

We are taking over 4+ city blocks, the main stage will be outside with three additional indoor stages. There will be a lowbrow art exhibit, a pinup contest and two burlesque shows. Tons of classic cars, dozens of food trucks and tons of vendors that will line the streets of Downtown Santa Ana for a one of a kind event that you wont want to miss!