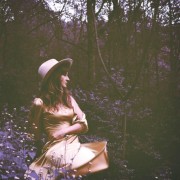 This past year at Muddy Roots Music Festival in Cookeville Tennessee was the last time I got to see these two road warriors that preach about the saw. Miss Megan is one of the most nicest and talented multi-musicians you’ll find behind a drum set, and Mr. Casey is a wild man behind the front Mic and together their set is quite fun to watch. Even when they do covers I enjoy their versions of the song as much as the original, however when they put out a new album I love the fact that this band IS original. I’m not looking for an album full of half covers I’m looking for ALL original, and THAT IS what this band is offering today.

“If I Die On This Highway” is a really well written upbeat rabble rousing song with some great steel guitar that was a great opening song to this album. Since I’m a dock worker I LOVE trucker songs with telecaster twang and steel guitars, and this song offers just that. It gives it a Dave Dudley/Red Simpson vibe with a new twist on sound, and the line about ashes in a Lone Star can was cool.

“TNT” was a pretty cool Western Swing type throwback song that was obviously inspired by Jimmie Rodgers and Red Steagall and folks of their ilk. Mr. Casey PROVES that he can sing gritty and wild or Swing type tame Texas Swing. And of course I been saying for years that Miss Liz Sloan is one of the finest most talented musicians involved in underground music today. It quickly changes direction with “Road To Knoxville” with a thunderous booming mixture of Honky Tonk Country with a really good job of production.

” Big 12 Gauge Shotgun” was MY favorite song on the entire album because I like the two step songs with the curling steel guitar fills that bring out the vocals and push the song. I LOVE guns and MY guns have my friends most of my life too. I have always been an advocate of firearm safety and respect, so I related WELL with this song AND the pedal steel solo was REALLY GOOD! “When She’s Drinki’n” was a really well written slow ballad song that I think was one of the top two songs on this album, I really enjoyed that song and if they don’t play it when I see them next live I’ll be sad. This album has a lot of pedal steel solos added and in my opinion it’s my favorite of their three albums..there are quite a few good lines on it, their songwriting has evolved for the better on this album (not that it was bad before).

“Devils Horn” was a song I heard last year at the festival and if you’ll remember me saying it was not bad, not one of my favorites however. “We Came We Sawed” was one of their ever popular Texas based chainsaw songs that you come to expect from them Stompers, it wouldn’t be the same without one…or two….or three. God bless those two. “Truck Drivin Man” was one I THOUGHT was going to be the ever popular song written by Terry Fell that Buck Owens recorded but it was an original with upbeat twangy tempo with lyrics about doing rails on bathroom sinks…because “Jesus Don’t Live In America Nomore”. I’ll be honest folks if you go see the Barnyard Stompers live you will NOT be disappointed and tell them I sent you.

This album has honestly earned a spot on my Top 50 for 2016 before spring even hits us! It opened pretty slow and smooth with “San Antone” which was full of fiddle and steel, it is true Texas local music. This band plays so well together that I’m pretty upset they don’t come to my area. This album is their ninth offering (not counting a live album).

“Acti’n Crazy” was probably the best song on the album with a line in the song “The Rent’s As High As Willie” which was well inventive,the guest spot filled by Jamey Johnson also made this song one of the best on the album. VERY well produced and well put together song wise. “Tequila Eyes” could quite possibly be a good commercially successful song if they put it on radio…but they wouldn’t it’s “Too Country”. It reminded me of some of the good ol’ nineties Clint Black Country.

“Takin It As It Comes” was a song that brought out a name I haven’t heard of in some time Jerry Jeff Walker. It’s an up tempo slamming banging song with some Honky Tonk piano and beer drinking lyrics. “Neon Blues” was another song that sounds like it came out of the nineties radio era Country and that’s NOT a bad thing honestly, I truly enjoyed the throwback sound. “Things I Need To Quit” was a Honky Tonk anthem of uptempo bar stories full of fiddle that any Country Music lover will enjoy…I did.

Folks this is one of the BEST string bands around Tennessee and one of the most entertaining bands I know of, they know me well and I so dearly love these three guys. They frequent the Muddy Roots festival as well almost every year you can hear them in the afternoon jamming away on kazoos and banjos to old timey tunes that take me WAY back to my Grandparents era where people needed to be dunked in the creek for their action on Saturday night, because if we ain’t sinning then Jesus died for nothing.

This album has a song called “Georgia Crawl” on it which is a hopping fast paced string band song that is sure to have the whole tent dancing this year! Along with another downright jam called “Blues In A Bottle”, I MUST tell you I just absolutely LOVE this type of music..so many melodies and notes coming at your brain. They truly outdid themselves with this album and I think it’s even better than the last album!

It’s a short album with only eight tracks but the important thing is the eight songs are all really good “Ruffle Drawers” is one hell of a cool instrumental song that showcases their individual talents really well, much like the Tillers or Woody Pines these boys are all DAMN FINE pickers in their own right. I could listen to them rip songs with no lyrics all night long.

Another really good song on the album was “Sand Mountain Drag” with good fiddle sawing and banjo picking on it, this song was originally recorded in the 1930’s by a left handed banjo picker from Gerogia named John Dilleshaw. From what I DO know about him (which isn’t much) he was about as tall as Stringbean Akeman..I read a few books with mention of his name in them. This band always does some extremely obscure songs from the Depression Era when REAL String Band music was around.

“Don’t Get Weary” was another fine title track song from this album that is another fun filled song that ANY audience will be able to sing along to and I cannot wait to hear this new material live somewhere along the road this year. KUDOS to you boys you done did a SUPER FINE job of this album, I’m enjoying it on X Box music I’ll have to order a hard copy!