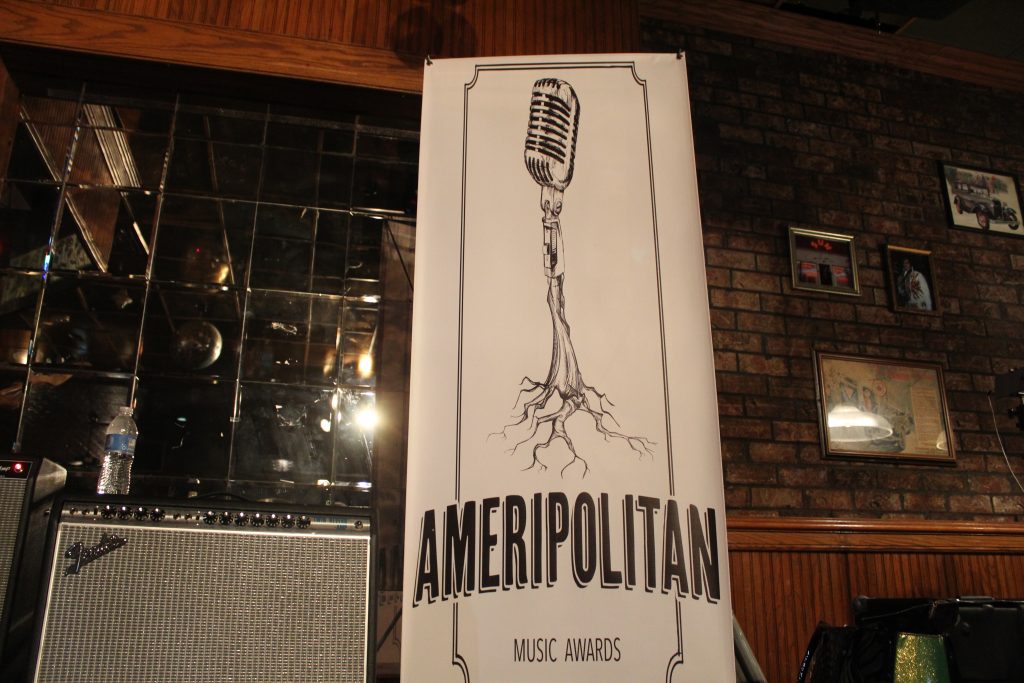 Well hey everybody here I am at the Ameripolitan Awards kind of tucked away in my corner sort of doing my thing here. I’m writing this as I listen to my buddy Mr. Pat Reedy play his set tonight, however I got to see some old friends first. I am going to skip around here, and talk about many things I did, food I ate and I REALLY wanted to help out the hotel I stayed at. That hotel had incredible service and nice accommodations for me as a guest. Plus it was right around the corner from where the showcases were today, and not far from Graceland.

There is an absolute plethora of events happening all at once here all around the city, and if I tried to report on everything I would have to clone myself …twice! This is my first year for coverage this deep, last year I only covered the awards, I decided to go all out this year. I have many different side articles going on for you this weekend, so enjoy them all!

The Country Heroes were the first band up today and to be honest I was getting set up today with my camera and other things. However I did indeed get to hear their set, they were one of the bands from overseas…Norway to be exact. Their new album is called Honky Tonk Tears, and one of their songs was called “Satan Loves Country Music”. It was truly a great picking song about how the devil wanted to join their band.

Their next song was called “Texas And Me”, this song made me grin as it mentioned eight tracks and had a smooth steel guitar tone to it. I have yet to venture out into Texas, but in the next year or so I will defiantly be there one day. The last song of theirs I got down was “Hangovers From Your Kisses”, people this song had more twang and style than anything I could tell you about!

Mr. Jimi Palacios from NOLA County and I had a wonderful lunch today over at Exline’s Pizza near Graceland. Now if you want the BEST pizza in Memphis in my opinion that is it! If I ever come to Memphis, and when I don’t go there I feel cheated. The Travelodge Wyndham hotel where the first showcases were was just around the corner from my hotel, and so was Graceland.

I stayed over at the Quality Inn at 3105 Millbranch Road close to the airport. I found the room to be VERY nice and clean, with a few great features and spacious room to relax. It was easy to enjoy the music this weekend with such an easy trek to my hotel room, as you already know I have my list of go to places all over the United States to eat and stay.

I would like to say THIS, Mr. Dale did this RIGHT this weekend! I mean they had a shuttle bus take us from the hotel to the showcases EVERY HALF HOUR, which saved time and parking. They also had a food truck outside the main hotel venue, I have yet to try it as of now..but I will. There is just too much going on at one time for me to accurately document EVERYTHING myself. I missed the Album listening party for Mr. Chuck Mead on behalf of my friends at Plowboy Records as well.

Mr. Pat Reedy And The Longtime Goners are a band that graced my TOP 50 OF 2018 but also consists of my friend Mr. John R. Miller who’s album also adorned that list! Got all that info? Now then, they opened with “Bloodshot Heart” from his new album “That’s All There Is And There Ain’t No More”. Enjoyed his true authentic Honky Tonk thump sound they have, always a hoot to cover their set.

“Burgundy In The Rain” is another song you just cannot make any better than it already is, Country Music at it’s raw finest. His first album “Highway Bound” is just as gold as his second, and I look forward to bringing you this new stuff he has loaded ready to go. “Lucky I’m Alive” is another song that speaks to me as a person, as I pretty much am lucky to be alive.

“Funny Thing About A Hammer” was next followed by “Big Wheels” roll slow, classic truck driver song. You cannot beat those good old fashioned truck driver songs no matter what era. The title track from his album called “That’s All There Is (And There Ain’t No more)” was next along with a song that describes my lunch hour at work..”Nashville Tennessee At 3 a.m.”

“Same To Me” from the second album and “They Know My name” from the first album were next, and one of the last songs I caught of theirs was “Coal Train Blues”. All in All this was by far one of the best sets of my weekend so far, however as of the time of writing this I still have today’s showcases to catch.

“100 Dollars And No Sense” was a song about partying and drinking your paycheck away, and not caring about it at all..all of their songs feature some terrific steel and fiddle work, complete with cowbell. If you truly Western Swing Music like I do this band is for you.

“Feelin’ It” was next followed by a song called “It’s All Your Fault” , and a song off their 2000 album “Hollywood And Western” called “Get Off Your High Horse”. Another truly funny song was their song called “She’s The Quarter Horse Type Of Gal”. They also included in their set the songs “That’s What I Like About The South”, “Real Good Lookin”, and their final song was called “Sugar Mamma”.

This next young lady brought home the Outlaw Female award, which like the rest of them I shall focus on here in just a little bit. I have a pretty funny story from later tonight I ubered back to the Travelodge singing Amazing Grace at midnight with some of the Revves Brothers, with a VERY kind driver. We tipped her beyond well, and she deserved every penny, when I write a book this shall indeed make one of the stories.

Miss Summer Dean played a DAMN FINE SET with the Reeves Brothers. Her first song was called “Picket Fence”, and quickly got my attention on her vocals. Her debut EP called “Unladylike” is just a small taste of what will be coming in 2019, when she releases her full album.

“Queen Of The Clowns” was a very good song, and although I’m sure that some of the songs are new ones that have yet to be recorded, I’ll report on the ones I did know about. “A Heartache I Can Use” was a terrific shuffle song that got people up on the dance floor. It is always fun for me to watch all the dancing even though I don’t really do it myself.

She covered the Roseanne Cash song ‘Seven Year Ache” from the 1980 album of the same name, as well as two other covers. One was the Ernest Tubb song called “Driving Nails In My Coffin”, the 1946 powerhouse hit that was also recorded by other people. It was originally on her ninth album called TNT in 1978, and she concluded her set with “Alabama ( Can I Call You Hank)”.

I took the shuttle bus down to Beale Street and the showcases that were at the Blues City Cafe, and I had the opportunity to eat Memphis ribs there. I was GREATLY satisfied with the rack of ribs and the service I got there, my waitress was VERY friendly and sweet. It was VERY crowded in there and was difficult to get pictures and take notes simultaneously, so I just took pictures of Mr. Casey James Prestwood who was included on one of my TOP 50 OF 2017 from one of the hotel lobby parties.

“Beer Tear Saturday Night” is just one of his Honky Tonk shuffle songs that talk about one of our favorite subjects…drinking beer….and crying in it. I’ll be honest here, it just simply doesn’t get any better than Mr. Casey when it comes to heartache and pain. I’m very glad I got to be invited tonight into his “Honky Tonk Bastard World”..

“Don’t Let It Die” was from his new album, which I hope it doesn’t die, and I hope that he has some new material coming in the next year or so. “Sorry In Advance” is a well written song and one of my favorites, however the closing songs like a new one like “Wine Drunk” and a song by Gram Parsons and Emmy Lou Harris.

Well now, let’s talk about another new band that just formed in January of 2018, and brought home the 2019 Western Swing Group award called Big Cedar Fever.  This energetic trio is based out of Austin Texas, and consists of Miss Georgia Parker on guitar, Mr. Ira Lee on fiddle, and Mr. Nick Lochman on the upright bass.

Their cover of the classic song called “Oklahoma Hills” was nothing short of exquisite and precise on every note in my opinion. I admired the instrumental portions of their set as they traded lead duties quite readily, and also the obscurity of some of their cover songs such as “The Girl I Left behind Me”. My favorite version of that was by Jim And Jesse McReynolds.

One of their new songs was played tonight called ‘Diner”, however I didn’t really get to catch as many of the sets here that I wanted to because of the space available. I’ll be completely honest, I couldn’t do that cramped of a venue. I needed to return to the hotel for the Kim Lenz Release Party.

Speaking of parties, the music was all over and not just on the stages. Whatever artists you enjoyed most, many of them were playing impromptu sessions all over the place. It just didn’t matter where you were, all weekend long there was music and friendships forming. That’s the great thing about music festivals and conventions, or events like this one. I myself made some awesome contacts and new friends, and I do EVERY year here. Wait until I tell you all about this man here..and I shall in part 2.