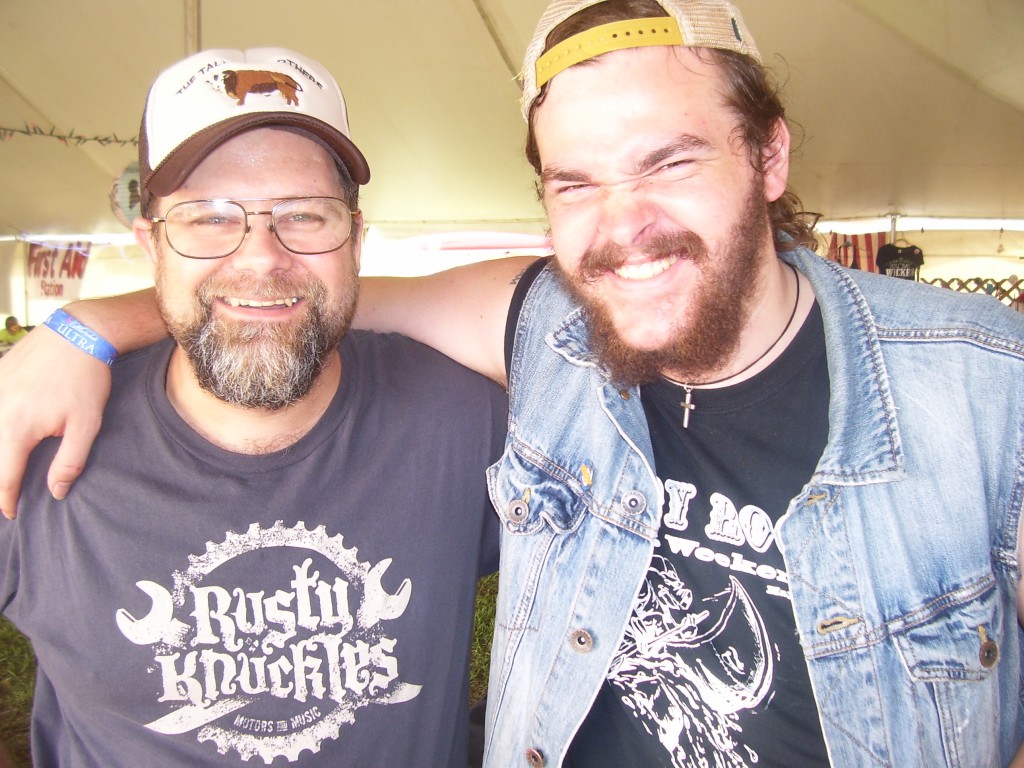 IF WE DON’T SIN THAN JESUS DIED FOR NOTHING is what my good buddy Squirrel form the first band of Sunday declared! They talked about dunking a lot of people through their always awesome set at Muddy Roots. The Glade City Rounders have been featured on here before and here they are again! You know last year they amazed me because they brought out my inner geek by playing a song by Ambrose Gaines Stuart, or “Uncle Am” as they called him. Some of the most well renowned and nostalgic music from the EARLY 1900’s the likes of Riley Puckett and Gid Tanner.

So they opened with “Leaving Home” and went into “The Grey Eagle” which is the aforementioned Uncle Am song. In fact quite a few performers today really impressed me like Dom Flemons who I’ll cover in just a few minutes..this time the Rounders played a Gus Cannon song too. I have indeed delved into Gus Cannon’s Jug Stompers from the 1920’s and 30’s Blues banjo music for a few months years back, and I really enjoyed their version of “Viola Lee Blues”. In fact in the 1920’s he recorded for Paramount as “Banjo Joe”, see there was MUCH MORE black performers within Country Music before Charley Pride (not that Charley isn’t anything short of an Icon to me).

I LOVE these guys because they leave me wondering WHAT they will pull off next to amaze me. I LOVE ANYTHING Pre-1930’s and I LOVE to learn or be triggered to delve into someone. “Georgia Crawl” was next and through all the jokes and comedy these guys entertain you much like Riders In The Sky or Mike Snyder. It’s just plain fun and it’s FUNNY, it’s just down home simple humor everyone can listen to. The played “Whoa Mule” before the Gus Cannon song and went into “Fly Around” and an Uncle Dave Macon song.

Honestly in my opinion Hank Williams was the first COMMERCIAL superstar Country Music ever had, but the first superstar was Uncle Dave Macon. Even Roy Acuff would agree with me having come to the Opry in 1939 like he did. there is just SO MUCH to delve into form that era like Uncle Jimmy Thompson and Deford Bailey another famous black star. The Uncle Dave Macon song they did was “Don’t Get Weary Children” and they closed their set with “They’re After Me” and “In The Jailhouse Now”. I got a FULL BOOK chocked with stories for you folks as this was the Bluegrass day at Muddy Roots and Mr. Jason outdid himself on this one.

I stopped over to see the County Graves who were on Little Class Records and I’m sad to say they are no longer a band but their set was indeed awesome! I missed their first song but I caught their second song “Sometimes They All Call Back” and their next song was “Arkansas”.

The tent was pretty darn packed for this set and I sat in the back for the duration of this one so I didn’t get to see very well but they JAMMED the place really hard core, as they tore into a song called “Hellfire Victory”. They went into a song called ‘Illinois Blues” and another good song called “Williamson” before closing their set with some old time gospel songs mixed together “I Saw The Light” and “I’ll Fly Away”. Man what a good set they did it’s a real bad shame they are no longer together but you never know what time will ever bring.

Dom Flemons is a former member of the Carolina Chocolate Drops who I first found out about on the Marty Stuart Show a few years back. This man KNOWS his history and he PROVES it in his set, I’ll tell you what today’s acts ALL amazed me to a high level of geek as they inspired me to further learn things for myself.

His first song was “Have I Stayed Away Too Long” and another song off his album called “Hot Chicken”. He played “Polly Put The Kettle On” before going into a Roy Acuff tune called “Lonesome Old River Blues”. I LOVED Roy Acuff and I’m truly sad I didn’t get to meet him in person before he died, but I have gotten to talk with June Stearns who sang with his Smokey Mountain Boys”

Then he brought out “Big Head Joe” which was a HUGE banjo fitting for the Muddy Roots HUGE banjo we all enjoy taking our pictures by. He played a song called “Milwaukee Blues” now this song was one I learned about, I learned about Charlie Poole who died in 1931 at only 39. Many regard him and the North Carolina Ramblers as the Godfathers of Stringbands although they only recorded from 1925 to 1930. Although Charlie didn’t actually write the song his rendition of it was one of the best ever done.

“I Can’t Do It Anymore” and the really cool song “But They Got It Fixed” were the closing songs before he played “Keep On Truck’n for his last song. He left me wanting to rush home and start learning about all these songs and people he talked about. Some of them I knew and some of them I didn’t, and I will SURELY be going to see this man again!

Before I finish my final portion of Muddy Roots coverage with the big three powerhouses of Bluegrass Music the big stage was filling up with droves of people FAST. It was one of biggest daily attendances I ever witnessed at a Muddy Roots Festival of all the years they have occurred in my opinion. I’m not quite sure what the sales were (I don’t ask the directors that stuff) but I tell you what…it was jammed up pretty hard. But, before I cover those three let me tell you about underground Legends Cincinnati’s own The Tillers.

They are on tour right now with J.D. Wilkes from the Shack Shakers and they are touring along the Ohio River, running all the way to J.D.’s home turf of Paducah Kentucky. This from their website:

We are proud to announce our next great adventure. The Tillers will be back on tour this fall, spanning the length of the entire Ohio River. “The Great Ohio River Tour” will feature JD Wilkes of the Legendary Shack Shakers, and will storm cities from the river’s northern source in Pittsburgh to Paducah near its southern terminus, October 15-23. We will meander along river roads, bringing our trademark stomp and holler to small towns, big cities, and various refuse along the way. It’s a tribute to the tributary that birthed our hometowns. Hear us pay it back in song. Let the great river rumble!

I’m having to skip this tour to attend a festival in Indiana so I will not be able to hit any of their shows but this IS a tour NOT to be missed if you can go GO!

They opened this second set (I covered them during the pre-party) with my favorite song they have EVER done “Willy Dear”. This song is so well written I’d say it’s one of my favorite songs in the last ten years of ANY genre and they followed that song with “Migrant’s Lament”.

“I’ll Be Calling” was another really good song as I can tell they changed their set list around to be a little bit different from Thursday’s set and that was an awesome thing to me. I truly enjoy their music and their album “Live At The Southgate House” is a classic album in my opinion.

“Georgia Street Beat” was one I noticed both sets form both nights and they played “Shanty Boat”. Both were truly good choices. They played my other favorite song called “Old West Side” and closed with “We Shall Be Reunited”. So sit tight folks because my final portion contains three Bluegrass Legends that you don’t see combined on the same stage too often! O DEATH IS NEXT PEOPLE!!!!!!