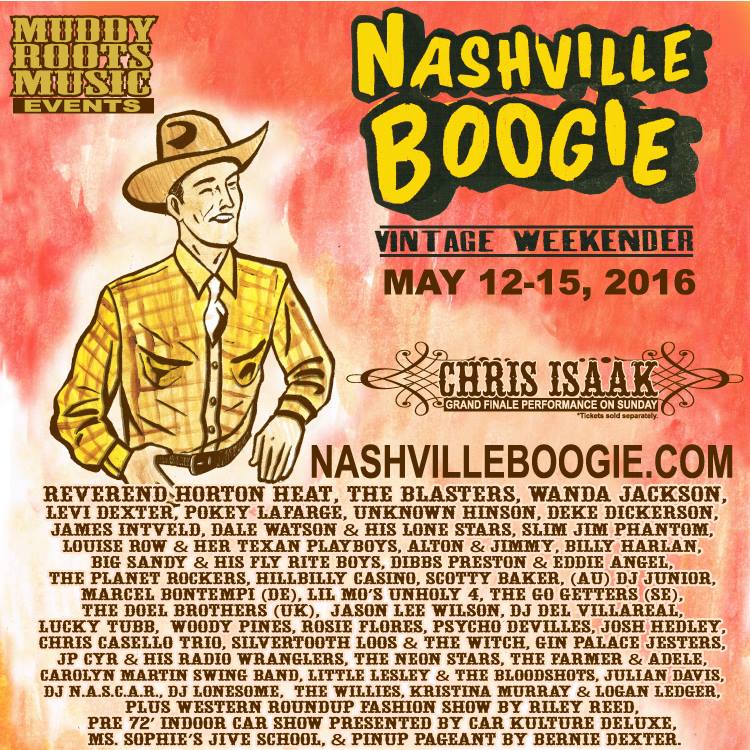 Muddy Roots recently brought Rock And Roll and Country Music Legend Billy Harlan to the Legendary Studio B in Nashville, and has released so much quality product form it’s label that it is hard for me to keep up with all of the things they have going on over there. Mr. Jason usually sends me a head’s up or sends me emails, but the truth be told I have so many irons in the fire and follow so many groups and factions it’s still difficult.

So just recently Muddy Roots CEO Jason Galaz announced that he was bringing a HUGE act to the Opry house that Sunday to finish off the Nashville Boogie Music Festival 2016. Now that headlining act is none other than Chris Isaak who released a great album in 2015 (and regretfully in my error I forgot it include it in my TOP 50 mentions of honor). This is a HUGE accomplishment for Muddy Roots and for the music they promote for many reasons, and we need to go support this portion of the show. Ok folks I’ll report this first THIS WILL be a whole different ticket separate from the festival event itself and you need to go HERE on the Opry page to see Chris Isaak.

Last year the Nashville Boogie was a HUGE international success on many levels, and it got a lot of media attention and although it did have a few negative points overall it was a GREAT festival and an awesome concept in many forms. This year Mr. Jason has addressed many of the negative points we as consumers pointed out, you know what? He ALWAYS makes sure I am taken care of as a FRIEND AND a customer and THAT makes it awesome.

He gone to take one some different directions this year and has strayed from the total Rockabilly theme to feature some off the beaten path acts while maintaining tradition and honest music. This year he has booked some acts I am REALLY looking forward to seeing and supporting, this festival is close to my home and I’ll be in Kansas City for a festival right before this one..but I should be able to hit this one too as it takes place May 12-15th at the Opryland Convention Center AND the surrounding areas.

The 2016 Complete lineup is here and tickets can be purchased HERE.

Ok folks so there will be a shuttle service to and from the Opryland hotel to the Nashville Palace all weekend and you know I’ll be using it because the schedule I have for myself will have me bouncing around like a pinball. I have new bands to cover and old favorites I’ll be covering on here for this event.

So folks I’ll be honest I have to contact Mr. Jason and ask him what the room situation looks like for the Opryland Hotel but here is a list of local hotels in the area for your help. NOW Tomorrow I’ll be in town for some various other reasons and I’ll be researching the area for other venue deals.
NOW MIND YOU some of it will be taking place at the Nashville Palace AND at the Opryland Hotel almost at the same time, ALL THESE SHOWS are included in your one ticket price for the WEEKEND PRICE, you CAN BUY single day tickets, ok?