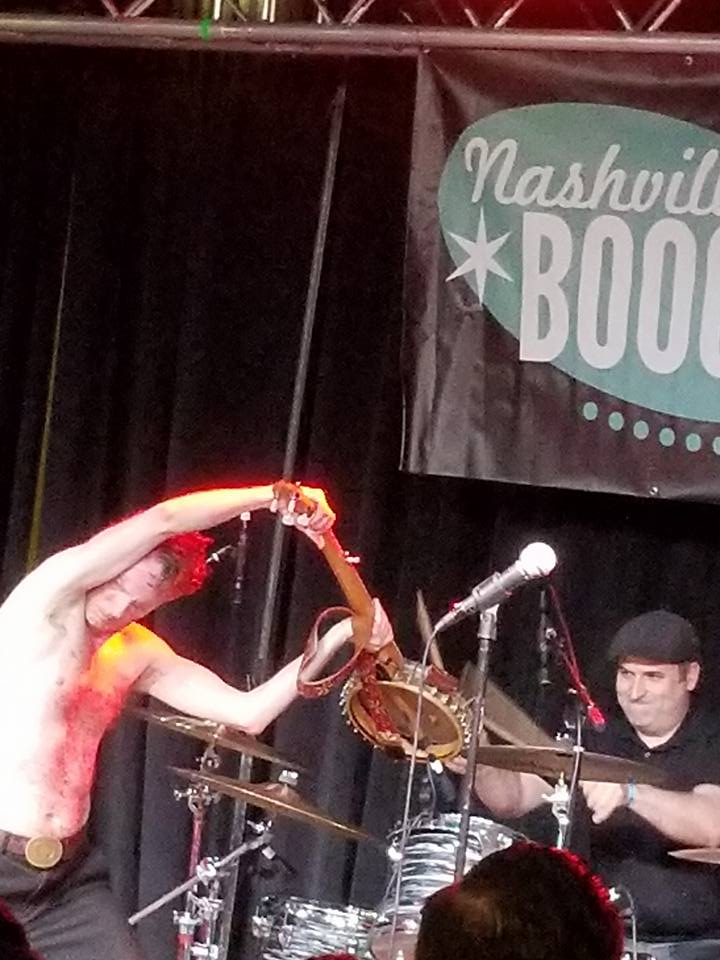 Well folks I have returned to the Opryland area for more music and fun today as the car show opened up early and the vendor area was bustling with early risers, and coffee drinkers like me. I’m not going to lie folks today’s action was pretty damn good from the first band all the way to the last one of the night.

The bad news, was Mr. Dex Romweber had to cancel and the good news was the Legendary Shack Shakers played longer sets. Out here in the Ryman Hall the music was incredibly loud and the acoustics were very powerful, the bass players sounded like thunder all night. Absolutely incredible sounds and antics from many performers tonight, and none of the bands slouched in any fashion.

This has been one of the best of the three Boogies to ever happen here in Nashville and I’m looking forward to attending many more in the years to come. So with all the being said the first band I would like to touch on is Nashville based Jane Rose And The Deadend Boys whom had a good friend of mine Miss Mary Rodgers playing Sax for her. I covered her band the last time she played this festival in the past and it was a blessing to become reacquainted with her music.

” Wrong Kind Of Guy” was first as they opened their set with powerful lead vocal intros and blazing hot guitar lead solos, and ripping bass lines that rattled the walls. “Hot Rod Daddy” was next followed by “Bad Little Betty”. All of these bands embellish the great Rockabilly guidelines and lifestyle this weekend and the song “Bitten” and “Rock Crazy Baby” by Art Adams were no exceptions. All the way down to her gritty soulful carrying of notes on “Hound Dog” to the powerful “You Can’t Have My Husband” they rocked their way out songs like “Fool” and they closed with “Love Me Like A Man”.

Then I went upstairs to see the Riley Reed fashion show, and to be honest I don’t know anything about fashion so to try to understand the art of it in itself is a task I undertook with great enthusiasm and wonder. All the different designers and models displaying the different clothes and the care that is taken to mold each piece just right.

The Psycho Devilles You know back in 2013 at Muddy Roots in Cookeville I became familiar with Hot Rod Walt and this band, also I had the opportunity to cover their set at many of the Boogies in the past. One song I did remember from last time was called “My Guitar Saved Me” and they followed that with one called “This Old Road”.

He was walking around handing everyone a sample FREE CD called “Swinging On The Moon” sponsored by Miller Beer and it contains three songs they played. “Ruby Ann”, “The Joke’s On Me” and another called “Chrome Sidepipes And SS Cragars”. However off the latest album they also played “Motor Honey”, and one called “Addicted To Love”.

Next up was “The Rebel” and a party song called “Victory Curls”, and a rocking tune called “Psycho Cadillac” and another called “Bar Fight” he played in two different speeds. Another great song called “My Way” was the difference between him and his father, who chose to work his whole life and when he retired he passed away. Instead Mr. Walt did things “His Way” and traveled the Country playing music. They closed with “Long Way To Go” , after their set I wandered over to the vendor area to visit with my car club friends from past festivals.

GOOD GOD possibly the BEST SET I EVER Saw The Legendary Shack Shakers perform EVER!  I just spoke to Mr. J.D.Wilkes and although he said a lot of it was random it was truly epic, and it involved crowd surfing and mass destruction of equipment. Much like the last set in Chicago not long ago this band absolutely slayed Nashville tonight in every way possible.

As they opened with their song “Mud”, they offered a heaping helping of their back catalog with songs like “Blood on The Bluegrass”, while lead singer the Colonel J.D.Wilkes ran around with an eclectic crazed demeanor. This set was much more different than two weeks ago in Chicago although it did contain many of the same songs.

They played “Hell Or High Water” and steamrolled into “Dump Road Yodel” while breaking guitar strings and part of their drum kit. Then they treated us to an instrumental and the song “Hobos Are My Heroes” all the while rarely stopping between songs. Literally they just changed tempos like when they played “Dixie Iron Fist”.

“No Such Thing” was next followed by the “Kentucky Song” and they closed with “Bullfrog Blues”. Their set included multiple stage diving episodes and came complete with J.D’s signature mic swinging and forehead popping, while sparing no use of his beloved harmonica thunder. The Legendary Shack Shakers sound like a tornado picked up a running locomotive. There was debris and broken strings everywhere along with cans, and every projectile one could imagine.

The Sonics are another band of Rockabilly Legends that we were blessed with this weekend. The Legends just keep coming at me this weekend here at the Boogie. These two sets were quite possibly the two greatest sets I have witnessed all year so far from ANY genre. I’m not going to lie these two bands absolutely created more chaos than like I said…all year.

They played a marathon twenty plus song set choked full of their timeless classic songs like “You Keep A Knocking” and “Psycho”. Their first song was “Cinderella” followed by “Shot Down” and “Cmon Everybody”. Despite their age they showed incredible poise and stamina, and showed that their age hasn’t slowed them in any way. As they displayed a terrific showing of their song “Sugaree” tonight and went into ‘Have Love” I realized their set was not nearly even half over yet!

“Be A Woman” was next followed by “Get In The Car” and “Head On Backwards” like pretty much all of the legends tonight they just blasted into song after song of old classic greatness. And for any true appreciator of music like me this was indeed a true treat to witness, and it could have lasted for days!

“Bad Betty” and the timeless classic “You Keep A Knockin”, was followed by “Louie Louie” and ‘Hard Way”. They also additionally came out and played some encores after completing their set with “Boss Hoss” and “Money”. They played the ever popular “Little Sister” and “Psycho” before finally leaving that poor clean up crew to sort out the mess.

The Country Side Of Harmonica Sam is a Swedish band that NEVER comes around here so I JUMPED at this chance to feature them and their rare brand of 50’s and 60’s Honky Tonk Music the likes of Buck Owens era music.

They have two full length albums out and played a REALLY LONG SET last night here at the Palace in the back parlor starting out with “Changing Her Thinking” and “We Have Strayed So Far”. Rolling right along into “Big City” and “Unjust Friends”.

They display every ounce of proper pop and twang to keep any Honky Tonk enthusiast busy with their five piece sound as the dance floor PILED UP with so many dancers you couldn’t see the floor, Holy Cow. This place was BUSY, and as they played “I’m Walking Slow” and “Unjust Friends” we wrapped up the main days of the Boogie in classic style all over the area.

“Blues Are Settling In” and “I’m Walking Slow” were next on the agenda for these boys. As people spun and danced to songs like “Why I Sing In A Honky Tonk” and “Empty Hours” I am pretty bummed that this band doesn’t come to the states more often but I can understand things.

“Drink After Midnight” and “Open Letter To The Blues” were next followed “Closely By My Teardrops” and “Cry Me A River”. They closer their set with “Even At My Best”, “Tears Don’t Stain” and lastly “Look Out Heart”. Truly an amazing job here by Muddy Roots and Mr. Jason Galaz, and EVERYONE ELSE who made this festival possible. All the bartenders and waitstaff.

THANK YOU ALL OF YOU!