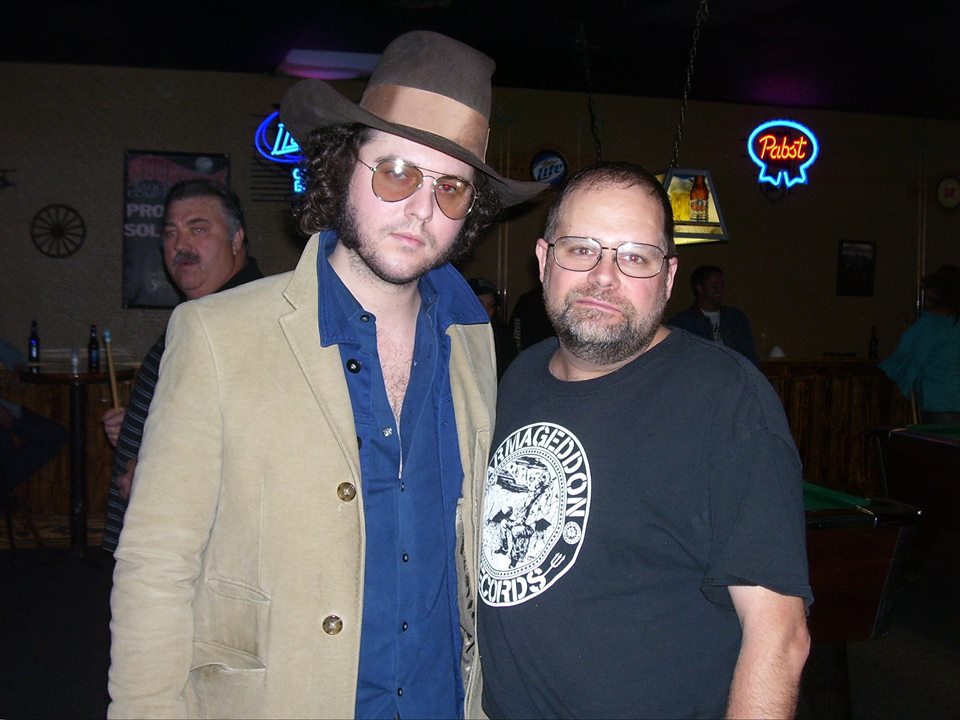 Folks tonight as I left work I learned that Heaven has called a friend home and it is with a heavy heart and some tears that I announce “The Colonel” Jon Hensley who manages Shooter Jennings (and more) has died. This is not your typical news article and I have no position to go into details other than the fact that I’m sad he is gone. Mr. Jon was taken from us way too soon and my last goodbye to him was a hug, and I never dreamed that would be closure to knowing him. I never thought that would be the last I see of him and never since the death of Wayne Mills have I been this shocked or brokenhearted over a loss.

Local music has lost a supporter and a warrior today, as many many times I saw him at the Spillway in the audience watching local bands like Shot Time And Cigarettes and Tanya Montana Coe.Mr. Jon wouldn’t want tears and sad faces he would want handshakes and drinks. He was an avid lover of the little bands that get overlooked by most and he truly loved music in general. He did a whole lot for me and for the proliferation of this website or as he called it “What Gary Does”. He was always asking me ‘What’s The Scoop” and admired my Farmageddon Shirts, always admitting his love of the records that come from that label.

Mr. Jon Hensley was a manager that had charisma and character and one of my first thoughts of him as a manager was that of Merle Kilgore. Mr. Jon had “The Look” and he had a demeanor that is lacking in the music industry today when I meet managers of the artists. He never once gave me a “What can you do for me” vibe…in fact many many times he told stage security “This is Gary and you give him anything he wants”. I have been a Shooter Jennings fan since “Put The O Back In Country” came out but when he began to work for Shooter I believe Jon helped create the want for fans to spend money on product and shows. He was honest and if he told you spider man was eating pop tarts on your front lawn then he was indeed. I’m not in any way saying Shooter is not successful in his own right but paired with Mr. Jon they were a force to be reckoned with and it was a rare type of brotherhood. Best friends in every aspect of their life.

Mr. Jon was a friend to all of us and always came over to say hello or always had time for me if I approached him. In fact he was one of the most openly approachable people I ever met in this business PERIOD. Music in general needs more managers with this demeanor, he stuck out like a Rooster wearing socks. He arranged and helped my good friend W.B.Walker with what I consider the greatest interview of his podcast career of him and Shooter Jennings.

Mr. Jon was a walking talking Country Music (and music in general) encyclopedia of facts and history. I mean honestly one time he and I had a really long conversation about an album called “Freckles And Polliwog Days” which is a 1974 album by Ferlin Husky. The man knew places and names and there wasn’t one time I ever was around him that I did not gain knowledge and I hold that VERY valuable. He was an absolute treasure and the world has lost a true gem of a man with more integrity than music row could ever hope to muster into a show.

He managed Country Legend Wanda Jackson as well but ninety percent of the time if you saw Shooter somewhere Jon was right in tow making sure everything was going correctly. He and Shooter made wonderful opportunities for my good friend Joshua Morningstar by hiring him to open shows for Shooter and Waymore’s Outlaws. No matter how crazy the show was or how busy he was he never once ignored me or denied me anything, none of their crew ever did. Miss Mary Sparr has always been more than kind to me as well, they were truly soul companions and perfect together.

He watched in admiration as I had Jessie Keith Whitley sign a picture of his Grandfather George Morgan that is also hand signed by George. He agreed that I had a really cool idea of a few items I have of “Three Generational” pictures. Many items I have of signatures of family members from three generations of Country Music stars and when I delved further into my idea he appreciated what I was telling him.

Mr. Jon and Shooter ran Black Country Rock Records which produced one of the finest albums I own “Ashes And Angels” from Fifth on The Floor, along with many of Shooters own albums. He helped Muddy Roots Music Festival with Wanda Jackson in many ways and also did a lot for Moonrunners in Chicago. I don’t know too many functions that he did not help out in some way shape or form. It was the underground local bands that truly benefitted from Mr. Jon whether they did business or he was just in the audience with us supporting the music and the venue. And on Thursday night we will all gather in Central City Kentucky and share memories..you can damn sure bet there will be laughter and tears. His Witty one liners and knowledge of Country Music will be in abundance there and I want to be a part of it….The world truly lost a beautiful man and just like Hank Williams he left a legacy behind at an early age and made our world a better place the best way he knew possible.

Here are the service arrangements as visitation will be Thursday June 4rth from 5:30-8PM and Funeral service will be Friday June 5th at 1:00. I plan to attend.