Shooter Jennings And Waymores Outlaws With Joshua Morningstar Show One. 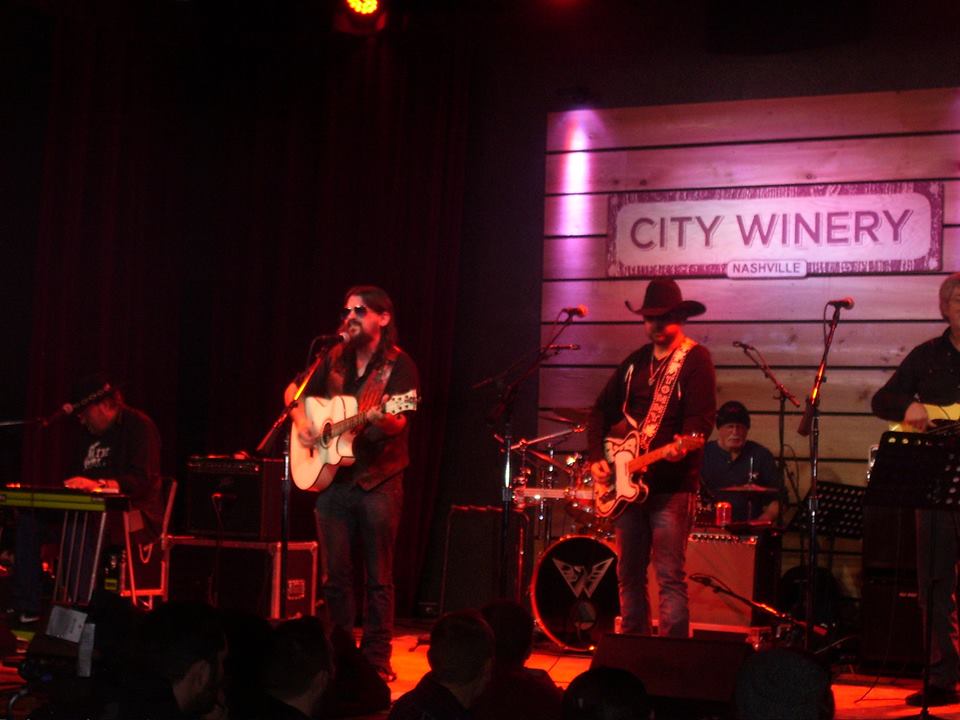 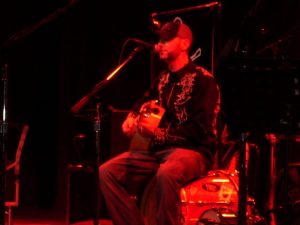 Me and Kenneth Marr are seated and this venue is gorgeous. I’m surrounded by old friends
and new ones. Joshua Morningstar is the star here right now around our table and is about
to go on. There are so many people around me its like I’m dreaming. Our buddy A.J. Hancock
from Diamondback Stringworks joined us at the table and Mr.J.D.Myers stopped by too.

Joshua came on in top form for us tonight opening his set with “Talk To Me Texas” by Keith Whitley. He is very much at home up there telling jokes and riling us up and to be honest he has grown quite a bit as an artist since Altamont. Honestly and truly he is better now than he was years ago. I tell you what its easy to do some work here because the seats and tables and WiFi are both great. ” Sellout Celebrity ” was next and the stories that he told were a memory that time will never take from me.

He followed by “Think I’ll just stay here and drink” which was one of his several covers
of the night by Merle Haggard. Another good original song was “As long as you ain’t coming back” which always has been a crowd rowdy song with It’s male friendly lyrics.

“A Honky Tonks a Honky Tonk even if you are drinking wine” is what he said to us before he
played “Sad Songs And Waltzes” for us. He plays the one man band act VERY well I studied him as he played his guitar and two drums one with each foot. I’d LOVE to see him play with Scott Biram. He then went into a tribute to Wayne Mills by playing “Old Willie Nelson Song:” as we all raised one for Wayne last night.

“Grip Of The Devil” is one of his original songs and I was happy with his choices last night.
I’m not sure if he is mixing up setlists for other shows I’ll find out soon.
He closed his set with The Billie Gant penned anti pop-country anthem “Stop Fucking Up Country Music”. Which to be honest left the place roaring..it was well received last night by many. 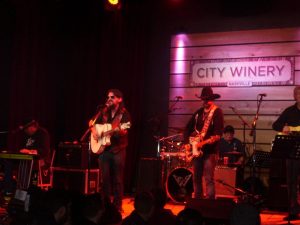 My first ever time seeing Shooter play with Waymore’s Outlaws which is pretty much Waylon’s old backup band that is still active. It consists of Jerry “The Jigger” Bridges Richie Albright, Fred Newell and Tommy Townsend.
It gave me a chance to finally get a shirt because last time they were out in my size.
“Dont Think Hank Done It This Way” was their show opener which was first released in 1975 on the album “Dreaming My Dreams”. The album was produced by Cowboy Jack Clement.

“Iv’e Always Benn Crazy” was next, and that song was from an album of the same name in 1978.
Honestly it’s my favorite album Richie Albright ever produced and they were clearly sticking to
my favorite era of Waylon classics. However I DO LOVE the Sweet Mother Texas album, and I have it in my will to play the album in it’s entirety before my ashes are spread on the grounds of my favorite festival. My funeral services will also take place at that festival as well.

They played “Luckenbach Texas” and “Good Hearted Woman” and to be honest Ol’ Fred Newell was in TOP FORM up there on that steel guitar. I LOVE his style that resembled the style of Waylon classic music.
Note for note they were really and truly classic last night in many ways. They closed their set with “Good O’l Boys” The theme from the Dukes Of Hazzard television show.

Like I said before Shooter Jennings was in tip top form last night with his father’s band. I really and truly enjoyed this combination and thought it was the best performance of his I ever saw. He opened with ‘Aint Living Long Like This” and “Black Rose” both songs of course his father’s.

He played “Setting Me Up” which was a rather rare song written by Mark Knopfler who was with Dire Straits. “She Talks To Rainbows” is a song off his BCR Mixtape which I picked up at the show last night and you MUST check this album out for a really good song by Jayke Orvis and I’m not sure if this fiddle work was Liz Sloan’s or not…

“I’m Playin Possom” is off his Tribute To George Jones EP which was just recently released.
As well as “Nashville From Afar”, I like that song a whole lot. I was indeed hoping he would have
played The Gunslinger but I still had a AWESOME TIME nonetheless because he played “Isis”.

“Solid Country Gold” was always one of my favorite songs from his first album that I still enjoy
today. I love that first album he put out with the .357’s. And he also played “Gone To Carolina”
as well from that album. His next song was “Hard Lesson To Learn”, and that’s a song I never heard him play yet live. So I was extremely excited to hear it live.

He played “whistlers And Jugglers” and followed that song up with MY favorite one he does
‘Fourth Of July”. Laugh if you want…that song is a JAM. And it brings back some good memories of years ago. I loved that whole album and probably always will..in my opinion it is a timeless classic album. They closed the show with “same Old Outlaw” which I’m pretty sure is an original Waymore’s Outlaws song. HE DID do one more song but to be honest I was trying to get prepared to go buy stuff from his merch table.

I’ll be honest with you readers about something: Shooter Jennings and his crew have been outstanding friends of my website since I relaunched it. And friends to me personally as well I cannot thank him enough for everything he and “The Colonel” Jon Hensley has said and done for me in the past. A lot of people hate on Shooter for their own reasons but I ask you THIS..How many people has he helped out? I could name you about 20 bands off the top of my head he’s produced and supported both with finances and verbal support. You just cannot argue with the amount of help BCR has been to SO MANY bands in the past few years. Honestly I don’t care who hates me for it I applaud him and support him, and I’ll gladly pay
to see him any time or buy his products and he will always have a home on this website.