Sunday was my 87th birthday—I can’t believe I’m 87, but I sure am having fun. I was just blown away by the amazing birthday party held over at Bridgestone and all the love these amazing stars gave me. It still feels like it was only a dream. I’ll tell you this, though, the one group of people I love more than all these stars is you—my fans. Truthfully, I’ve always considered my fans as my friends. I wouldn’t be anybody without you. You’ve stuck with me through thick and thin and that means the world to me. Last year’s stroke was tough on me, but my family, your love, and God’s help have seen me through. I’m so thankful to be feeling so much better and getting so much stronger. I look forward to being out there with my fans a little again soon.

If many of you remember correctly we published a nice article advertising her birthday bash at the Bridgestone Arena here in Nashville which you can read about right HERE.  She is currently riding high on her most triumphant previous release on Sony Legacy Records called “Wouldn’t It Be Great”….and indeed it was. Every site like mine heralded it in utmost highest regard, and raved about the magnitude of depth in her new songs at her age. She was a huge presence at the Grammys and even though she has had a few minor health mishaps, the Country Legend remains one of our most beloved and celebrated icons in the genre. The Lifetime Movie Network is currently filming a movie exploring the close friendship between Miss Patsy Cline and Miss Loretta Lynn.

Casting for the movie has been announced, and two Broadway stars are set to headline. Megan Hilty, who was previously seen on Broadway in Wicked and 9 to 5: The Musical and on television in NBC’s series Smash, will play Patsy Cline. Jessie Mueller—who won a Tony Award in 2014 for her portrayal of Carole King in Beautiful: The Carole King Musical and has also been seen on stage in recent productions of the musicals Carousel, Waitress, and On a Clear Day You Can See Forever—has been cast as Loretta Lynn.

According to TVLine, the film will be executive produced by Neil Meron and Mark Nicolson, with Callie Khouri, the creator of the television series Nashville and the Academy Award-winning writer of Thelma & Louise, set to direct.

TVLine shares the film’s synopsis, which begins, “When they first met, Patsy (Hilty) was already one of the biggest stars in country music while Loretta (Mueller) was just a coal miner’s daughter, starting off with little to her name but a $17 guitar. Instead of seeing Loretta as competition, Patsy took Loretta under her wings to help her make it in Nashville.” I myself think the movie from the 1970’s Coal Miner’s Daughter distinctly helped us understand the close bond between these two ladies in their era. Many people have closely studied and learned a lot about this pair of one already grounded mega star who took on a new protege.

Production on Patsy & Loretta will begin soon, with some of the filming reportedly set to take place in Nashville, Tennessee. 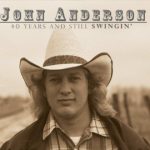 A few years back one of my favorite Country stars from the 80’s and 90’s Mr. John Anderson released his first all new album in years called Goldmine, which was VERY well received by the media, like mine. The album was absolutely amazing in every fashion and strengthened my faith in both him and also my notions.

What’s my notion you ask? Well let me continue to elaborate my hypothesis of the situation currently at hand about the state of Country Music here on not only a local level but a mainstream level as well. I have often heard that everything comes and goes in cycles, and that statement right there goes against what the pop country people claim that everything evolves. I do not believe things evolve in any fashion, I believe they change and then old becomes new again.

Things indeed come in cycles, and the recent triumphant return of vinyl record sales in stores and online PROVE that things DO return back around. Also, let’s take a look at the format of traditional local music that is currently slaying venue sales right now. I mean look at Mr Tyler Childers and Mr. Cody Jinks selling out the Red Rocks Amphitheater in minutes, and him bringing along Mr. Mark Chesnutt to return to glory as well.

I recently wrote about Miss Tanya Tucker and Mr. Tracy Byrd making new albums and touring in 2019. I have a whole list of names that will ring your bells from that wonderful era of 1983-1993 when the radio was playing that GOOD Country Music like Mr. Randy Travis and THIS MAN…Mr. John Anderson.

He now returns to the studio to start things fresh as he embellishes his own four decade career with remakes of many of his old classic songs only he could make fresh again. There are a few new songs on these two albums that were actually previously recorded and never made the final albums in the past. Now, we will able to hear them as they are finally brought to light.

“This year has started out on fire for us and no sign of slowing down,” says John. “I feel great and am enjoying this part of my 40-year career more than any other time I remember. This two-disc set as long overdue and has the hits you’d expect, but also includes a few previously unreleased songs that didn’t make it onto past albums for one reason or another, but I felt they deserved a chance to be heard. It’s always nice to walk down memory lane, but we aren’t resting either