This is a breath of fresh air in a year that has so far been void of great releases.  Bobby Dove has released their second LP in Hopeless Romantic.  It follows the also great 2016 release Thunderchild.  I must admit, this is my first experience with Bobby Dove’s music.  I saw this release recommended several times on Twitter and when I finally listened to it, I was blown away.  Great traditional country music here with good song writing, some variety and yes, it has pedal steel.  Read on to find out why this is the first record I’m writing a review for in 2021.

If you like twang in your country, the opening title track to Hopeless Romantic will be all you need to hook you.  I love Bobby’s vocal range on this track and the instrumental is tight and fun.  The interplay with the pedal steel and lead guitar is great.  I love lyrical turns like “I’m a known assassin // When it comes to killing years // My heart’s been stranded // And I’ve been branded //A hopeless romantic”.  This track has everything you need to get you into the groove for this record.

Another favorite is the upbeat “Gas Station Blues”.  Once again, Bobby shines with great vocals on this track that is built around classic blues characteristic of repetition with variation.  Each opening line gets repeated with some variation in the second.  I dig the guitar solos after each short verse too.  It’s a song I can’t wait to hear a live version of as I’m sure it will be a jam.  Also be sure to check out the ballad “Haunted Hotel”.  It’s a story song about an unrequited love affair between two singers.  It explores the ups and downs of such a relationship and the lonely feelings that can come with it.  I love the haunted sounds of the pedal steel as it plays off the piano in this track.

Another track you should check out is the Spanish language “El Hormiguero”.  It’s a slow haunting ballad about a love that destroys you to the point that you have an out of body experience and get to look down at your experiences like it were an “ant hill” which is what the title translates to.  I love the whining pedal steel on this track and it’s a great ballad with strong Spanish vibes.  Finally, you need to check out the acoustic number “Golden Years”.  It’s a highlight of the record with great guitar playing and vocals from Bobby.  It’s a song about questioning how you made it so far and how you’ll make it to your “Golden Years”.  It’s a very good and simple track that deserves a listen.

Bobby Dove’s new release is a bright spot in these dark times.  If you like good traditional country sounds, I highly recommend checking this one out.  If you like good pedal steel and a healthy dose of twang on your songs, I highly recommend checking this one out.  I have to give props to the pedal steel player Burke Carroll and piano player Steve O’Connor for their exceptional playing on this album.  The entire band is great, but they are certainly highlights that will have listeners coming back for more.  Hopeless Romantic was released independently on February 12th, 2021.

Posthumous Tony Joe White Album, Smoke from the Chimney, Set For May 7th Release With Easy Eye Sound
Produced by Dan Auerbach from nine unreleased vocal/guitar demos; “Boot Money” and accompanying animated video out now via NPR/World Cafe
“Smoke From The Chimney is more than a faithful tribute to one of the great Americana musicians and national treasures, performed by an ensemble who capture the DNA of Tony Joe White’s songs with beauty, warmth, and reverence.”
–NPR’s Bruce Warren
February 19, 2021 – Nashville, TN – On May 7th, Smoke from the Chimney, a nine-song album of never-before-heard Tony Joe White tunes, will be released on Easy Eye Sound. Produced by Dan Auerbach and rounded out by Nashville’s most seasoned studio musicians, Smoke from the Chimney started out as a number of unadorned voice and guitar demos from White’s home studio before being transformed into full band arrangements harkening back to the albums he recorded in the late 60s and early 70s in Nashville and Muscle Shoals—just as he was emerging as an internationally recognized songwriter and recording artist.
It takes a keen eye and a steady hand to restore something great from the past; to take the time to examine, catalog, and care for every last task without resorting to bolt-on mail-order parts and cheap paint. What was always great deserves that extra care and attention to detail, and when the time came for White’s son and manager Jody White to revisit his dad’s catalog of unreleased songs, he knew Auerbach was the one to make them shine once more.

Yesterday, NPR/World Cafe gave fans their first listen of “Boot Money,” a gritty, thumping ode to keeping a little bit of extra scratch hidden away. Of “Boot Money” and the album as a whole, Bruce Warren of World Cafe wrote, “For Tony Joe fans, these songs and the stories they tell, are some of his best. It’s hard to conceive that these were songs that didn’t make it on previous albums.” “Boot Money” comes accompanied by an animated video from director Robert Schober which colorfully places White and Auerbach in the recording studio to kick off the tune before following along while White lives out the song’s storyline. “As someone who grew up in Louisiana and the Panhandle,” says Schober, “it was a pleasure working on video paying homage to a legend of the southern airwaves.” Fans can see the video for “Boot Money” at this link and pre-order or pre-save Smoke from the Chimney right here.

In the last 10 to 15 years of his life, White would preserve new compositions or revisit older tracks in his home studio with only a guitar—usually his Fender Stratocaster—and that inimitable voice. Most of that material would ultimately wind up on his late-career albums. But when an unproven song didn’t make the cut for a release, or if he couldn’t get another artist interested, the song stayed right where it was as Tony Joe moved on to other things. This dismissal was not a reflection of the song’s quality; in fact, it meant quite the opposite, as he would often reserve his best material for other artists.
After his father’s death in 2018, Jody started transferring those multitrack home recordings to digital files. Looking back on the moment he unearthed the demo of “Smoke from the Chimney,” he recalls a mix of happiness, gratification, and shock. As he continued to find other songs that didn’t make an album, he moved the material into a separate folder. Within a year, those select recordings would evolve into Smoke from the Chimney. Jody says that even in those basic tracks, that definitive Tony Joe White groove instantly stood out. “He always finds a tempo and a pocket that is exactly right. And it’s a little bit different than anybody else would choose themselves,” he says.
Ever since meeting Tony Joe backstage at an Australian music festival in 2009, Auerbach sought to make a record with him. For nearly a decade, Jody tried to line up session time for them but Tony Joe demurred. “For one reason or another, my Dad would never just want to go into a studio and write with somebody, or go work with somebody,” Jody says. “He liked to do it at his place, and his way, and it turned out how it turned out, you know what I mean? So, this album really all worked out perfectly. He was making these tracks for Dan all along, but we just didn’t know it.”
Auerbach agrees. “Jody and I had been talking about this record for so long, and it didn’t happen for a reason,” he says. “It’s because it wasn’t supposed to happen. I was in a nervous cast of characters until the last few years, and if you’d given it to me any earlier, it wouldn’t have been right. I felt like all these people on the record were the right people and they laid in there behind Tony Joe. It felt really magical when we were making it happen.”
“These songs feel like a collection to me and they all seem to work together, in a weird way, even though they’re so different,” says Auerbach, who is releasing the album on his Easy Eye Sound label. “There’s some heartbreaking ballads and some really raunchy carnal blues. But it all works together like scenes of a movie.” The cast of musical characters brought in by Auerbach to accompany White’s guitar and vocal recordings includes legendary keyboardist Bobby Wood (Elvis Presley, Dusty Springfield, Wilson Pickett), Nashville pedal steel ace Paul Franklin, next-generation guitar hero Marcus King, and Grammy and ACM award-winning fiddler Stuart Duncan, just to name a few.
Jody believes that his father would love the way Smoke From the Chimney turned out. “I feel like it’s validation that Tony Joe was one of the greatest of all time,” he says. “That he could make something so potent, even so late in life, is something that not many people can do. I think it’s going to make people who loved him already love him even more.”
Smoke from the Chimney Tracklist:
Smoke from the Chimney
Boot Money
Del Rio, You’re Making Me Cry
Listen to Your Song
Over You
Scary Stories
Bubba Jones
Someone Is Crying
Billy 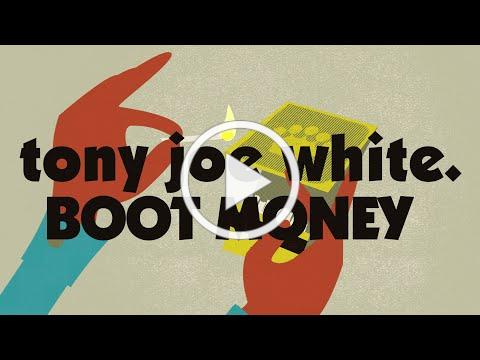