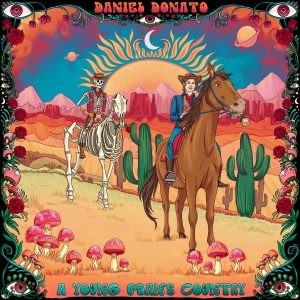 Now this is what I call a guitar record.  Daniel Donato comes in hot with his debut album called A Young Man’s Country.  He calls his brand of country music “cosmic country”.  When you cover the likes of John Prine, Waylon Jennings and Grateful Dead on a debut record, you better bring it and Daniel Donato does.  This record is honky tonk blended with psychedelic sounds.  Daniel Donato has a great signature guitar sound that fits the tone he’s going after and he rocks the house on just about every track.  Here are some of my favorites.

The album kicks off with “Justice” which is a fun love song.  The chorus sounds like something you would hear on the radio in country music’s golden age.  When you combine that with Daniel’s signature guitar licks, this song is a great preview for the rest of the album.  Another favorite is “Meet Me In Dallas”.  It’s one of the longer songs of the record clocking in at almost seven minutes so you know it’s a jam.  The song starts off as a ballad about being alone before it goes into a trippy interlude that leads into a long multi-layered jam session that is sure to be a fun extended live jam.  Daniel Donato gives similar treatment to Grateful Dead’s “Fire On The Mountain”.  He uses this track to showcase how his brand of cosmic country can apply to the more rock side of this sound and it’s a killer jam.

Another straight banger on this album is “Diamond In The Rough”.  It has a similar feel to “Justice” in that it was made for radio but decades ago.  It’s a toe tapping number that actually gets to stretch its legs out a bit.  I love how the band seems to kick it up a notch at different points in the song till the solo comes in and breaks out into another multi layered jam that builds to a stunning crescendo before bringing in the final chorus.  Finally, we have Daniel Donato’s Waylon Jennings cover “Ain’t Living Long Like This”.  It’s an amped up version that applies Daniel’s signature sound to the Waylon classic.  This song brings something different to the table with some killer honky tonk piano in the mix.  It adds another layer to the jam session at the end of this one.

This may be his debut studio album, but Daniel Donato and his band come across as a well seasoned country jam band.  They dabble into southern rock and psychedelic elements that add layers to their jam sessions on record.  I can’t wait to hear what some of these songs sound like live where I’m sure the band plays much longer than what you get here.  A Young Man’s Country is available digitally everywhere you can buy and stream music as of August 7th, 2020.  You can find out more information on Daniel Donato’s website here.

Favorite Tracks : Justice, Meet Me In Dallas, Fire On The Mountain, Diamond In The Rough, Ain’t Living Long Like This