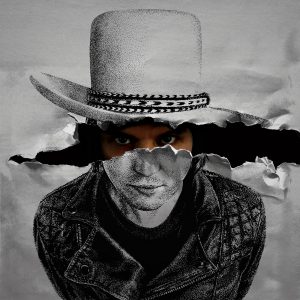 Tennessee Jet is back with his follow up to his 2017 album Reata.  The Country is Jet’s third full length LP and it is my favorite of the albums he has released so far.  Tennessee Jet recorded this record in California with Dwight Yoakam’s touring band.  It also features the likes of Paul Cauthen, Elizabeth Cook, Cody Jinks and Mickey Raphael on this record.  Let’s take a dive into some of the tracks on this one.

The opening track “Stray Dogs” reminds me a bit of “The Road Goes On Forever” by Robert Earl Keen but in a good way where this song echoes the style and feel of that classic tune.  “The Raven And The Dove” is Tennessee Jet’s version of the tune he wrote that Cody Jinks recorded on his 2019 album The Wanting.  This version is more somber than Jinks version of the tune and the pedal steel and guitar get to shine more in the instrumental here.  An absolute highlight of the track is the grungy “Johnny” which is a tribute to Johnny Horton as the song covers the topic of his death.  It plays like a grungy classic Nirvana tune and somehow it just fits right in the middle of this record of solid country gold.

Following that is Tennessee Jet’s version of “Pancho & Lefty” which features Cody Jinks, Elizabeth Cook and Paul Cauthen.  This song has been done many times, but there is something about this tale of outlaws that always draws me in.  This one is no different.  Another highlight is the title track “The Country”.  It’s a slow moving ballad that features guitar and fiddle but it has my favorite line of the entire album.  I love the slow build to the line “I miss you like the country radio don’t play no more”.  It’s a tune that has to be heard to be fully appreciated.

Tennessee Jet has released what is in my opinion the best record of his career.  The Country has some good variety in the record throughout from solid country gold to folk leaning rootsy tracks to a grungy rock epic about a country legend.  You will find a bit of everything here.  I hope to catch Tennessee Jet live sometime in the near future as I have not been able to see him live yet.  You can follow Tennessee Jet on his website.  The Country was released everywhere you can find music as of September 4th, 2020.

Favorite Tracks : The Raven And The Dove, Johnny, Pancho & Lefty, Hands On You, The Country, She Talks To Angels