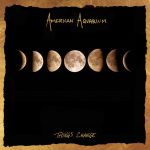 Ladies and gentlemen, it’s the time of year where all music journalists put out their best of lists.  Gary Hayes will have his own list coming up soon.  This is my personal Top 50 Country Albums of 2018. I could probably double this list to 100 with all of the awesome releases that have come out in the past year.  It has been that good of a year. However, that being said, I feel like these 50 albums represent the best of what I heard over this year. I reviewed many of these during the year and you can find every one of those reviews on this website.  I will link a few of them here in this article. Every record on this list is worth your time, from number 1 to number 50. Gary Hayes will have his own separate list published later this month, check it out too. Let’s kick things off with the album of the year and Top 10, and then immediately following that will be 11 – 50.

This album stuck with me the most throughout the year and thus, it is my number one record of 2018.  From the heartland rock politically inspired tune “The World Is On Fire” all the way to the country balladry of “‘Till The Final Curtain Calls”, this is the best album American Aquarium has ever put together.  I doubt you can find another band that can weave in and out of heartland rock and roll and country with the skill and ease this band does. I look forward to whatever comes next from BJ Barham and company. Check out my full review of Things Change from earlier in the year.

This album had me last year with the single “A Little Dive Bar in Dahlonega”.  That song was out well before the album and has stuck with me ever since. The album itself ads more great tracks to Ashley’s repertoire and there isn’t a bad cut on this one.  I predict big things for Ashley McBryde in 2019 and I’m looking forward to seeing her open for George Strait in Atlanta next year. Check out my review of this record here.

Randall King is a throwback to an era of country we don’t have many throwbacks to.  He takes the best elements of 90’s country music and brings them to modern times. His songs “Mirror, Mirror”, “Tuggin’ On My Heartstrings” and “Cool Under Pressure” have stuck with me and this album is often played front to back when it comes on.  Check out my review of the record here.

The sound on this record is perfect.  Everything is spot on and these are the best tracks Josh Card has ever put out.  Check out a couple of my favorites in “Suffer” and “Won’t Chase Your Love Anymore”.  Read my full review of the album here.

This is straight up the best live honky tonk band going right now.  This album is another great chapter of their music adding some killer new originals, some new Dale Watson and even ZZ Top to their live set.  Give this one a spin however you listen to music and read my review here.

This album is punk rock outlaw country at its best.  Sarah Shook put out her best record yet with Years. It has been high on this list all year and lands at number six.  Do yourself a favor and read my review of the record here, and then go out and buy a copy and see her live when you get a chance to.

Belle Plaine has released some solid country gold right here.  I’m still digging on “Taxes, Death and You” and “Is It Cheating” featuring Colter Wall.  Do yourself a favor and give this one a spin. My full review of this record is here.

Colter Wall does not disappoint on his sophomore full length release.  This album has some great tunes with “Plain To See Plainsmen”, “Thinkin’ On A Woman” and the Billy Don Burns cover “Wild Dogs”.  This album could have been number one if this year wasn’t so stacked with awesome releases. Check out my review of this one here.

In her follow-up to 2016’s Holidays and Wedding Rings, Jamie Lin Wilson has put out her best stuff yet with tracks like “The Being Gone”, “Everybody’s Moving Slow” and a cover of Guy Clark’s “Instant Coffee Blues” featuring Jack Ingram sticking with me in heavy rotation.  Do yourself a favor and give this record a spin, you won’t regret it. Check out my full review here.

I knew when I first heard Dallas Moore’s track “Mr. Honky Tonk” that this would be a killer record.  This album represents a high mark in Dallas Moore’s career and there isn’t a bad track on it. I’m still digging on “Shoot Out The Lights”, “Killing Me Nice and Slow” and “You Know The Rest”.  Do yourself a favor, check out my review and pick up a copy of this one.

18.  Dillon Carmichael – Hell On An Angel

29.  The Brother Brothers – Some People I Know

34.  John Prine – The Tree Of Forgiveness

40.  Adam Hood – Somewhere In Between

44.  Mike & The Moonpies – Steak Night At The Prairie Rose