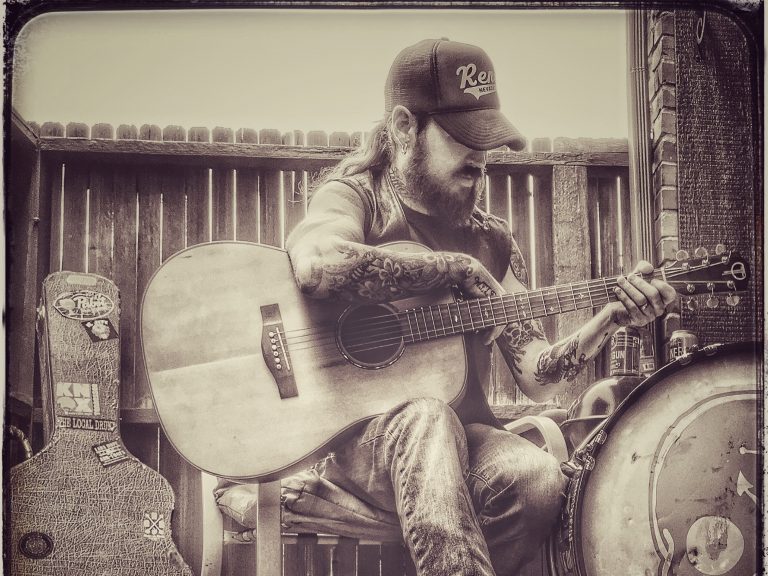 This year at the Westport Saloon I attended the Westport Roots Festival for the second year in a row, where I finally got the chance to run into this West Coast road warrior and his name is  Mr.Lorin Madsen Walker.

Now folks you’ll be wanting one of his increasingly popular “Fuck Your Tractor Rap” stickers for your sticker collection, along with his new 2017 release called “Slave Of The Road”. I finally got the chance to feature his gravely vocals and rough around the edges Country Music as he played the pre party show before Mr. Jayke Orvis brought out the Broken Band again.

He also played for my friends in Nebraska for the mighty Pondstock Festival Lake Hedke where Hellbilly And Outlaw Radio reported to me that he tore it up out that way! This new release was I believe his third album to date and when I did see him I got the chance to scoop up all three of them.

“Slave Of The Road” and “Traveling Man” are pretty much self explanatory titles for this album. Many times when people start singing about how Country they are….they aren’t and in fact they are a complete antiphrasis. But then again often times there comes along a complete  opposite of the fake sentiment. One of those that stick out above the many is Mr. Lorin Madsen Walker, once you hear the validity of his rough life in his lyrics AND in his vocals you will concur…he is real.

To be honest in the past five years I have been traveling all over America following these road warriors around and watching what they do..I don’t believe I could ever live this life for a paying job living. That fantasy is in EVERYONE’S MIND but it just isn’t feasible for someone like me.

This album takes your mind through a wonderful journey of rural America and all it’s grandeur, you can tell this man has been around like chicken pox. This isn’t a life that only but a few truly salivate over and when you are a tride and true road warrior your palate isn’t easily satisfied with a fast three day jaunt.

You know folks the only ONE complaint I had about this album was the song “Settle Down” for me at least it was pretty much a yawner, I think what turned me off was (what I consider) the worn out “Johnny And June Love” reference…It’s pretty much beating a dead horse from so many others already using this comparison. It WAS a well written and had a GOOD delivery, but that pretty much was a buzzkill for me, but I wouldn’t mock you for ONE MINUTE if you disagreed with me on that level. We ALL like different aspects of this music for sure, and MY word isn’t gospel folks, this isn’t North Korea.

Other than that this album was an absolute pleasure to add to my collection and a MUST HAVE in yours, Whether you have a white collar or not. Because HIS collar ain’t white folks for sure, and he stresses just that in his songwriting and his demeanor.  This album also proudly boasts some terrific background steel guitar and fiddle in the songs that truly embellish the well written lyrics.