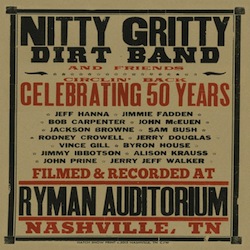 Folks welcome to my ever popular album features series where I usually pair up 5 or more albums of the same “fitting” to feature NEW albums to you my readers. To be completely honest 2016 has been a year of heartbreak in deaths AND a breakthrough year for iconic bands and artists to release new material. Many bands have released live albums that WILL be included in my TOP 50 of 2016, and not to ruin it but THIS album is IN my TOP 50 BIG TIME. Folks this live recording of The Nitty Gritty Dirt Band celebrating their 50th year as a band at the historic Ryman Auditorium during their tour also includes a PBS TV pledge special, had me in tears of both joy and sadness.

Jeff Hanna, John McCuen, Jimmy Fadden and Bob Carpenter who are the current members of the band hosted an iconic performance of some of the NGDB’s most beloved and timeless classic hits from their 5 decades of bringing us their brand of “whatever the hell it is they do” music. I mean honestly you can call it Americana, Country, Rock or whatever you want..I call it the Niity Gritty Dirt Band.

Even as the times have changed, so has the band’s sound and the lineups as well. The band prides itself upon featuring so many instruments that have been played by so many people within the brand itself that the songs cannot be duplicated exactly like they were recorded. This album also featured so many writers and stars that the guests alone make the album stellar and unbeatable by only ONE person I can think of to steal the number 1 spot from this album.

The album began with “You Ain’t Going Nowhere” by Bob Dylan who sadly wasn’t there this night, but was followed by one of song writing’s most revered Legends John Prine who played “Paradise” and “Grandpa Was A Carpenter”. You know folks despite Mr. John’s current health issues you wouldn’t even know he was sick, and actually AS I WRITE THIS John Prine performed a groundbreaking show at the Ryman in his tuxedo. John Prine has more dignity and reverence for ALL genres of music than anybody I could name you. When he passes on he will be forever immortalized through music within our hearts and souls, I can assure you. The opening line of Paradise is truly one of the most powerful verses of songs ever recorded.

Vince Gill came to pay respect to the band with Sam Bush who helped found the New Grass Revival, to play the song “Nine Pound Hammer” which is pretty much public domain it is so old, as well as “Tennessee Stud”. As well as one of the earlier members who also came out Jackson Browne to play one of their earlier hits “Truthful Parson Brown”.

Allison Krauss was on hand to perform the Mother Maybelle Carter classic “Keep On The Sunny Side” and the ever popular “Catfish John” wrote by Dallas Frazier. My favorite version of that song was done by Johnny Russell, however she has a voice of pure gold. One of the songs that always makes me cry is “Long Hard Road” also called The Sharecroppers Dream which was originally wrote by Rodney Crowell on one of their earliest albums.

The Nitty Gritty Dirt Band has many iconic albums under their belt and one of them was Uncle Charlie and his dog Teddy from 1970 which includes the collectors poster of the band in it’s early days that features the controversial group photo of the Klu Klux Klan,that album featured the Jerry Jeff Walker song “Mr. Bojangles”. Also, former member Jimmy Ibbotson was on hand to perform “Fishin In The Dark” and this album ended (of course) with a group version of “Will The Circle Be Unbroken”, which was a concept album from the band that spanned their 50 years in three volumes. Although there has been talk of making a fourth volume no effort has been put forth…yet, and the NGDB holds the record for the largest public assembly for a concert from their appearance at the Ozark Mountain Jubilee where it was reported over 350,000 paid to see them play.