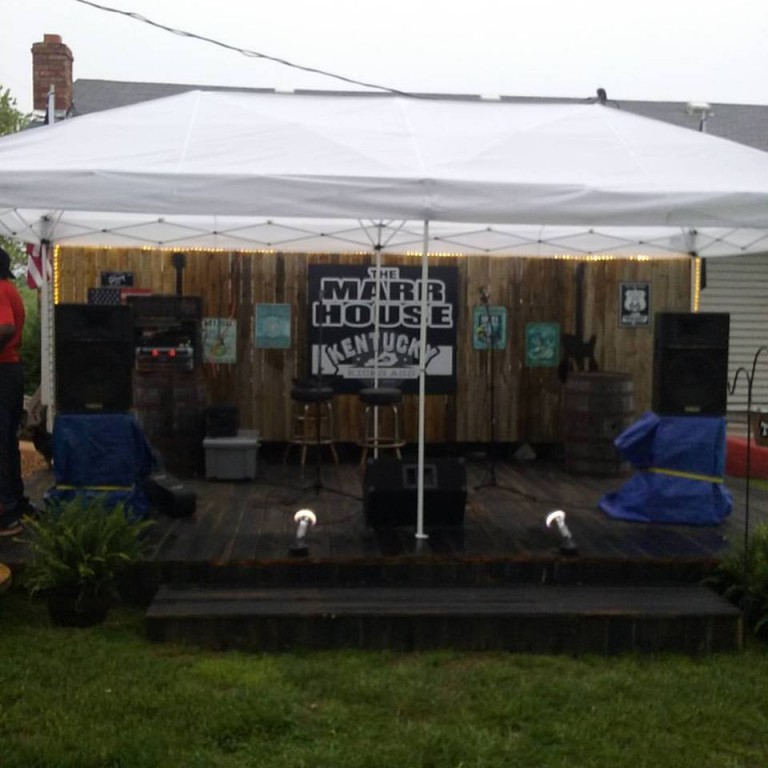 Well folks I am here at Mr.Kenneth Marrs backyard cookout which got a little rained out today. Kenneth Marr Graphics is one of my most special go to guys for graphics work. I tell you what he turned his backyard into a venue that is not only family friendly and full of love he has opened his home to artists everywhere. He and I have always been really good friends and had a mutual admiration for each others talents, and his wife Miss Mary Jo Marr is absolutely the most kindest person I ever met.

There was smoked chub bologna and beef roast and hamburgers and more beer than I needed all within a truly family orientated backyard setting. Hula hoops and toys for the kids to play while we all met new friends and rejoined old ones for a truly blessed time in Kentucky. I want to THANK my friends from Virginia Mr. Kevin Vaughn and Mr. Eric Litz for driving so I could have a few beers last night while I wrote this article in the rain. Despite the rain and damp air we still had a wonderful time for Mr. Kenneth’s birthday party.

John King And The Mud River Revival had to play friday night early because of the weather for cast, and I had to work so I missed the show. I heard good things about their forthcoming album and I’ll be close at disposal to them for releasing it to you. I talk to them quite often on a regular basis so you can rest assured I’ll have them on a feature soon.

So last night we had two artists that took turns swapping songs in a songwriter round fashion and I have featured them both on here before. In fact Chris Moondawg Hall has also released a new album and instead of featuring it on my usual multiple album articles I’ll feature it here.

This album was produced by Moondawg and the Talent Brothers who also released a good album last year. This album has 11 tracks on it and right now it is available on digital copy off his website. Please note that they switched off doing songs but I separated the two so you didn’t get confused. Moondawg was second in the whole show but his first song was “Driving Me Lonesome” which is the first track off the new album that he had a co-writer on along with his next song “Misery In Jen”.

Another song off the album he played was “Stardoom” one that he wrote by himself and was probably my favorite off the new album. Like many others that I met at the same time I met Moondawg I am seeing him grow as an artist and become more developed of his own style and identity as a songwriter. At the time I first met him perhaps he didn’t have as many road stories as he does now, or chose not to express them until now. Whatever the reason he chose to share some really fine songs with us, but make no mistake the songs from his older album are just as good.

“Normal” was included in his set tonight with my favorite song “Breckenridge County however he changed it up a little bit for us. I requested it but honestly he was getting ready to play it anyways, I HAD to have that song for sure. Perhaps his most known song is called “Land Of Make Believe” which was aired on C.J. Cumberland’s radio show out of Louisville a while back.

He did indeed do some covers during his set however mostly he doesn’t do many covers because he likes to showcase his original music. I come out for original music mostly however “Old Habits” and “It Ain’t Easy Being Me” were included in his set, along with “Simple Man” and another Skynyrd song “All I Can Do Is Write About It”.

He played a song called “Dirt” off his first album, however like I said this new album is well worth adding to your collection by all means. So far the last two years have seen some really good albums come from the artists involved with the series, and I’m watching his friend Kyle Wilson as well. Road To Sanity which was co-wrote by Wayne Mills was one of the best songs on the album and if Moondawg is in your area you need to go see him, you’ll be glad you did.

Kendra Hope is a young lady I have featured on here a few times and once again she did a wonderful job singing and playing for us. She has an EP you can get from her website and the songs she wrote on this album are amazing for the fact she’s a young adult.

She opened the show with “Folsom Prison Blues” but my favorite song she does (and Mr. Kevin’s too) was Tumbleweed which she wrote at the age of ten! In my opinion she has a gun she just needs bullets now, once she writes a few more songs she will be absolutely unstoppable! NOT that the covers are bad folks, it’s just my opinion and I’m hoping this inspires her to write more songs or cut some from writers.

She is an amazing talent and played “Takin Pills” quite well along with “Wild Eyed Girl” and “Outlaw Women”. You can obviously tell she wasn’t influenced by others of her own age group within music, and that’s not in any way bad. One thing that truly impressed me was her EXCELLENT cover of “Clyde” off Waylon’s album “Music Man”. Ironically it also was covered in 1978 by Dr. Hook, and it was originally recorded by J.J. Cale who wrote it.

She played a REALLY GOOD version of “Sixteenth Avenue” by Lacy Dalton which I bet even Sunny Sweeny would have loved her cover of that song. Connie Smith’s song “Once A Day” which Bill Anderson wrote was part of her set along with “Fortune And Fame” I believe that one to be an original song. This young lady is amazing and has been invited to perform overseas as well, and I want to point out that Miss Kathy Jennings and Mr. Larry are doing a DAMN FINE JOB of managing her and promoting her, and I hope to be able to do many more articles on her. Once you think of a gal her age you might think she’s just a novelty act but you’ll quickly see you are MISTAKEN!