Brent Cobb & Them at Due South Music Festival in Thomasville, GA 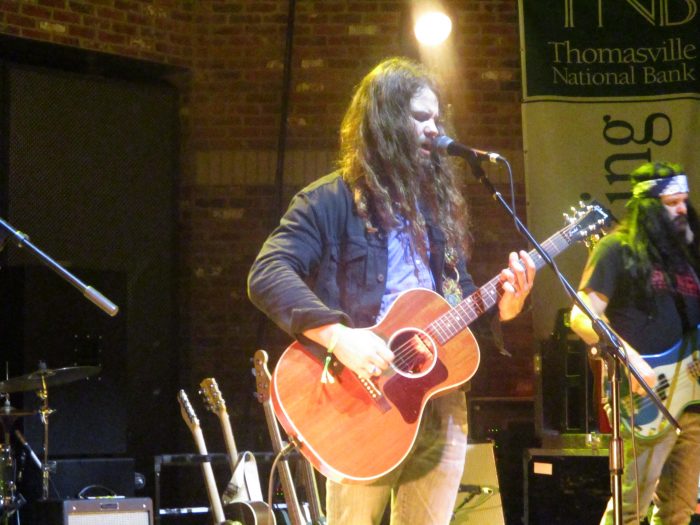 Brent Cobb rocking out at Due South Music Festival in Thomasville, GA.

This past November, I made plans to catch Chris Stapleton’s All American Road Show in Jacksonville, FL with Brent Cobb and Marty Stuart supporting him.  Due to heavy traffic getting to the show, I missed all of Brent Cobb’s set and most of Marty Stuart’s set. I was finally able to see Brent Cobb live this past Saturday at the Due South Music Festival in Thomasville, GA.

This was the seventh running of the festival which hosts multiple events around the community and ends in a concert at the Thomasville Amphitheater.  The concert is a community affair with most attendees bringing their entire family out to enjoy a day of good food and music. The Thomasville Center For the Arts organizes the entire event and made sure everyone was happy with plenty of good options for food ranging from local BBQ to food trucks. There was an amazing lineup of music set for the day featuring Jon Bellamy & The Rebels, Amanda Anne Platt & The Honeycutters and Brent Cobb & Them.  Texas country singer Charlie Robinson was originally scheduled to be the headliner, however he had to cancel due to recovering from vocal cord surgery. The venue had a good sound setup for being a small amphitheater and the entire experience was quite enjoyable.

The show opened up with Jon Bellamy & the Rebels who are a 4 piece country rock outfit out of Tallahassee, FL.  Their set consisted of mostly covers and a few originals. They covered songs like The Allman Brothers “Ramblin’ Man”, David Allan Coe’s “The Ride” and Merle Haggard’s “I Think I’ll Just Stay Here and Drink”.   The only original tune I caught the name of was “White Trash Dad” which closed out their set.

Next up was Amanda Anne Platt and The Honeycutters from Asheville, NC.  I was more familiar with their music through their stellar self titled album which was released last year.  The Honeycutters are a very well rounded Americana band featuring Amanda Anne Platte on lead guitar and vocals and she is supported by a keyboard player, a pedal steel / electric guitar player and a drummer and bass guitar.  They played original music from across their discography including newer stuff like “Long Ride” and older stuff like “Irene” from the very first album they released as The Honeycutters back in 2009. They closed the set out with a newer tune that is not on any albums called “18 Wheels”.

The main event of the evening was Brent Cobb & Them.  As I already mentioned, this was my first time seeing Brent Cobb and I left very impressed with Brent and his band.  He played a lot of the first album Shine On Rainy Day and also heavily featured new music from his upcoming release Providence Canyon.  The music from Providence Canyon represents a sonic shift from Brent Cobb. While Shine On Rainy Day was a more acoustic album, this new music leans more to southern rock and provides some good variety in his set.  There were plenty of extended jams which I did not expect and his lead guitar player did not disappoint. Brent did do a couple of covers in his set with a great rendition of Lynyrd Skynyrd’s “Swamp Music” and a equally good version of Dwight Yoakam’s “Guitars, Cadillacs”.

Of the newer music, I quite enjoyed the performances of “30-06”, “Providence Canyon” and “Mornin’ Gonna Come”.  He also played “King Of Alabama”, “Ain’t A Road Too Long”, “If I Don’t See Ya”, “Sucker For A Good Time” and “When The Dust Settles” from the new record.  After hearing this new material live, I am really looking forward to getting this album in my hands and reviewing it when it releases in May. As for older music in this set, Brent touched on nearly everything from Shine On Rainy Day.  I think the only song he didn’t play was “The World”. He also played “Down Home” which was his contribution to his cousin Dave Cobb’s Southern Family compilation.

I know Brent Cobb is touring with Chris Stapleton’s All American Road show tour a lot this year, but if you get a chance to see him headline, do it.  He puts on an amazing show and the variety in sound between his first album and his new album makes for an exciting full set.  You can check out his future touring dates and see if he is coming near you here. Finally, I want to thank Due South Music Festival in Thomasville, GA for allowing me to come out and cover their event.  Check out https://duesouthmusic.org/ for more information on the festival and follow them on Facebook for information on their 2019 festival when it becomes available.