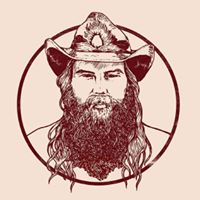 From The Desk Of Mr. Joshua Wallace:

On Saturday, November the 11th I had the chance to catch Chris Stapleton All American Road Show tour. This stop featured opening acts Brett Cobb and Marty Stuart. Due to unexpected heavy traffic around the arena, I was in a traffic jam from 30 minutes before the show started to an hour into the show. I got into the arena just in time to catch Marty’s last few songs. The set sounded killer as I’ve always expected from him. His “Orange Blossom Special” and “Time Won’t Wait” were highlights of what I saw. I wish I had caught Brent Cobb, but I will see him somewhere down the road in a smaller venue.

The main event was Chris Stapleton. This evening his wife was absent from the show due to being pregnant with their twins. I wish them the best and hope he takes some time off when she has them to be at home. That being
said, while her absence was noted, Chris and the band didn’t miss a beat.

He has quite possibly one of the most solid 3 piece bands in country music. His band is simple, yet amazing. He is front and center and the main sound you focus on throughout the night, but J.T. Cure is amazing on the bass and Derek Mixon is a great drummer. As a unit, they can veer from country to Stevie Ray Vaughan inspired extended blues numbers to folk rock and solo folk songs. It is truly an all American road show.

During the set, Chris plays just about everything you would want to hear from both of his currently released albums and even some stuff from the yet to be released From A Room Vol. 2. In fact, on this night he debuted a song called “Nobody’s Lonely Tonight” which was a slow country blues ballad that I can’t wait to hear on the record. With this show being miles from Tom Petty’s home in Gainesville, FL, Chris also did a Tom Petty cover with “Into The Great Wide Open”. Let me be the first to say, I will never tire of Tom Petty covers at concerts. I would not be upset if it becomes as regular as covering Skynyrd when a band stops in Florida.

For another highlight of the show, he brought Marty Stuart back out and covered Waylon Jennings “I Ain’t Living Long Like This”. This song featured some amazing back and forth solos from both Marty and Chris. As far as the rest of the set, he plays about everything you would want to hear. Noticeably absent was one of my favorites from From A Room Vol. 1 titled “Up To No Good Livin’”.

That aside, he plays pretty much everything from “Traveler” to “Tennessee Whiskey” with some hilarious extended band intros to the somber “Whiskey and You”. He works some amazing extended jams into his songs and I loved what he did with both “I Was Wrong” and “Outlaw State Of Mind”. He also paired “The Devil Named Music” with a
snippet of “Freebird” at the beginning of the track and that got a great reaction from the Jacksonville, FL crowd.

I highly recommend checking out Chris’s All American Road Show tour while you can. It features some great opening acts regardless of where you see him and Chris has one of those voices that you have to hear live. My
apologies to Brent Cobb and Marty Stuart for missing all or most of their sets. Finally, this article has no photos because I was in the upper level in the back of the arena across from the stage. Chris’s stage for this tour features a huge light array that makes pictures from afar not turn out so well. However, I can assure you that you will have an amazing time wherever you sit in an arena for this show.