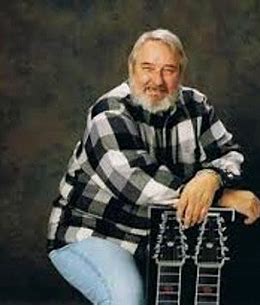 I stumbled upon an email not long ago about a certain episode of this particular podcast, and I decided to check it out. Well I’m not entirely sure if you are anything like I am, to the point of having to not only hear that one but ALL OF THEM in the same afternoon. Well, unfortunately I could not do that on this podcast, for the simple fact that there are quite a few good episodes I wanted to listen to multiple times.

Anybody that is a true Janissary of Country Music in any sense of the genre, needs to listen to many of these episodes. The main reason being is that the people that are interviewed are from all different aspects of the music genre. The very first episode that I gravitated toward was the one that featured Legendary steel guitarist Mr. Jim Vest.

Mr. Jim Vest not only contributed to Johnny Paycheck, but also he heavily contributed to Mr. Vern Gosdin, David Houston, and a long list of others that paved the way for some of the artists that have been featured on this very same podcast like Mr. Collin Raye and Mr. John Berry.

This show gives you insight, right from the source of the insight on as many avenues of this industry from musician per idem and how management does their job to govern things, to how to copyright different things like songs and logos.

Each and every different episode on here is another journey into a different aspect of the music business on the side usually forfended…the side which isn’t always the most desirable.  With so many different angles of instruction, the many variety of guests have an uncanny way of inculcating their talents, so you too can learn from them.

“What an amazing time visiting with Country Music Success Stories. They were so prepared and dug deep into the music and songwriting. You will hear behind the scenes conversations never heard before,” expressed Frank Myers.

“I think I’ve played “You And I” on the radio a thousand times and never could have imagined that, one day, I’d be sitting beside the man who wrote the song. Frank Myers is full of stories, including how he wrote “You And I”, “I Swear, I’m Already There”, and “My Front Porch Lookin’ In.”  If you are a songwriter, this is an episode you just can’t miss. Oh, and having a tour of his man cave was AMAZING.” stated Candy O’Terry.

“Having the opportunity to sit and talk with a songwriting icon like Frank Myers was inspiring in every way“ shares Jacy Valeras. “ His dedication to his craft is remarkable, and the wisdom he shares in this episode is some of the best advice a young, aspiring artist can hear.”

The popular podcast made its debut on in the top #25 on Apple Podcasts USA Music Interviews Chart and has been picked up by iHeartMedia, the #1 commercial podcast publisher globally and RADIO.COM which is powered by Entercom, the 2nd largest radio group in the country and the top podcast producer which includes 800+ streaming stations across the US.

In this Nashville based podcast, radio legend & master interviewer Candy O’Terry goes straight to the pros to hear their stories. From singers to producers, songwriters to record label executives, radio programmers and DJ’s to PR and marketing pros, every episode is a deep dive into what it takes to succeed in the country music industry. If you want to make it in Nashville, you need a roadmap. Music City Mentor and Founder of Platinum Circle Media, Jacy Dawn Valeras provides valuable advice about everything from writer’s rounds to online marketing and building a network that will go the distance

After spending a week together in Nashville with the idea of doing a 4-part series for O’Terry’s award-winning podcast and radio program The Story Behind Her Success, the two realized that the city was rich with stories to tell and that a platform for music industry stories, combined with the rich content Valeras had accumulated through her YouTube series, might be a hit.   As life-long singers and country music fans, Candy & Jacy have a clear vision of the guests they seek.  “We’re on the lookout for women and men who aren’t afraid to tell the world how they got to where they are today in the music business….including the good times when they were riding high, and the bad times when they were on the verge of giving up. These stories are meant to teach and inspire others to take a chance on living their dreams.”

About Frank Myers:
Frank J Myers is from Dayton, Ohio. He moved to Nashville in 1981. Frank got his start in Nashville as band leader, road manager and lead guitarist for Eddy Raven in 1981 and worked with Eddy for nine years. It was with Eddy that Frank started writing, playing and co-producing sessions. They had two number ones, five number twos and three top tens. Songs such as “I Got Mexico,” “Bayou Boys,” “You Should’ve Been Gone By Now,” “Sometimes A Lady” and many others. It was in 1982 though, that Frank had his first single (a song he wrote by himself) with “You and I” for Eddie Rabbitt and Crystal Gayle which stayed number one: four weeks country, number two for six weeks AC and number six for four weeks Pop. It was during his time with Eddy Raven that Frank met Gary Baker. They had their first number one together in 1993 with “Once Upon A Lifetime” by Alabama. Gary and Frank recorded one album for MCG/Curb Records as Baker & Myers and were three time nominees for Duo Of The Year at the ACM’s and CMA’s. Their greatest accomplishment as writers together came when John Michael Montgomery recorded “I Swear” which was number one for four weeks on the Country charts. The song was then recorded by All 4 One and went to number one on the pop charts and stayed there for 11 weeks. Since then, “I Swear” has won many awards, including: American Songwriter Magazine Pop, AC, R&B, Country and Overall Song of the year. Pop, R&B, Country and Overall Songwriters of the year. 1st Annual Country Radio Awards Single and Song of the year, C.M.A. Awards for Single of the year, Song of the year nomination, Grammy Awards for Country song of the year, Best R&B Vocal and Song of the year nomination, A.C.M. Awards for Single and Song of the year, N.S.A.I. Award for Country, Pop, and AC Song of the year A.S.C.A.P. Award for Country, Pop and R&B Song of the Year Billboard Magazine Awards #1 song of 1994, Jukebox Award for 1994 Song and Songwriters of the Year and International Song Of The Years Awards for Canada, Germany, Great Britain, France, Sweden, Switzerland, Japan and China. Frank also co-wrote “I’m Already There” the seven-week number one smash by Lonestar, which was nominated for a Grammy and CMA Song and Single Of The Year. The song also went to number two on the AC chart and named American Songwriter Magazine’s Country Song of the year and Frank was voted Country Songwriter of the year along with Gary Baker and Richie McDonald. His single “My Front Porch Looking In” by Lonestar is the first record in R&R history to go to #1 fall to number #2 for 6 weeks and go back to #1. Frank’s latest #1 was “Tomorrow” by Chris Young which was also nominated for ACM Single of the Year. Frank has had songs recorded by over 50 Country and Pop Artists, He has had 12 number ones and 20 top tens and is a 2021 Nashville Songwriters Hall Of Fame Nominee. Frank’s Artist co-writes and Productions include Kenny Loggins, Richie McDonald, Lonestar, Vince Gill, Billy Ray Cyrus, All 4 One, Pam Tillis, The Gatlins, Andy Griggs, Eddy Raven, John Rich, Dave Fenley, Angie Keilhauer and many others. He was nominated for a Dove Award in 2009 for his writing and production work on “I Turn To You” recorded by Richie McDonald. This was his first Dove Award nomination, as well as his first Producer nomination. Frank is also a member of Leadership Music’s class of 2005.

Candy O’Terry:
Known as Candy O for 25 years on Magic 106.7/WMJX, Candy O’Terry is an award-winning content creator who has spent her career providing a platform for women to share their stories.  As the Founder of My Dove Productions and the Candy O Radio Network, Candy’s lens is focused on women doing great things with their lives.  She is the host of The Story Behind Her Success weekly podcast and radio series, The Speaker Coach podcast, 16 Life Lessons Motivation Monday feature, and Candy’s Land, a 4-part music video series for young children during the pandemic. Her latest venture is the Nashville-based podcast series Country Music Success Stories featuring Music City Mentor, Jacy Valeras.  Chosen by her peers as the 2015 Massachusetts Broadcaster of the Year, Candy is the winner of 50 local and national awards for excellence in women’s programming. To date, she has interviewed over 700 women from every walk of life with the mantra: when we lift each other up, we all rise. A lifelong singer, Candy’s full-length CD Dream Come True includes songs heard around the world. Born in New York City and raised in Connecticut, she is also the Co-Founder of Boston Women in Media & Entertainment. The consummate performer, Candy O has never met a microphone she didn’t love!

Jacy Dawn Valeras:
Music City Mentor and Platinum Circle Media Founder Jacy Dawn Valeras got her start as a country singer.  Born and raised in a little town outside of Boston, Jacy was writing songs and singing at local events at only 13. By the time she was 19, Jacy was opening for country music legends like Reba and Willie and performing at iconic venues like Madison Square Garden, the Bluebird Café and the Texas Troubadour Theatre. When vocal issues caused her to press pause on her singing career, Jacy knew she had to turn the page and start a new chapter.  In 2012, she combined her talent and experience as a performer with her love of social media marketing, graphic design and content creation to launch Platinum Circle Media. Grammy, CMA, ACM, JUNO Award winners and Country Music Hall of Fame members have become Jacy’s clients and friends. Widely known as the woman in new media who returns calls, meets deadlines, believes in the power of relationships to get the job done, Jacy checks all the boxes. When it comes to content creation, digital marketing, and increasing online visibility,  Jacy Dawn Valeras is in a league of her own.  As the creator and host of the Music City Mentor YouTube series, Jacy shares her wisdom with aspiring artists. Her inspiring platform devoted to mentorship and how to make it in Nashville, has 250 thousand views and counting.