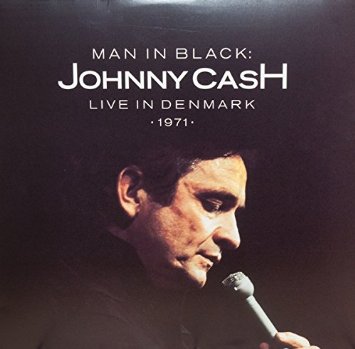 First off allow me to start by saying the reason that this album wasn’t on my Top 50 or even mentioned in my articles was one main reason..the mailman messed up and delivered my package to the wrong address. I did not receive this album until this morning in my PO Box, and finally I am spinning this vinyl that originally was reissued on Record Store Day last year. It was indeed originally released in 1971 but now it is remastered in better form.

To answer your first thought YES it is performed in English however he does make a few poor attempts to greet the audience in Danish, but this concert is indeed from a period in his career of peak top notch shape. I mean we all know of his legendary benders of drinking and pill abuse and his on again off again bouts with pneumonia throughout his life, his breathing problems were often evidentially problematic on many of his live albums. It often became a long running joke as it did on his Folsom Prison live album where he mocked the nasty water in the tin cup.

In the 1970’s many Country performers were releasing some of the finest breakthrough live albums in history including Buck Owens most famous Carnegie Hall album, and his White House appearances where they performed an entire show with only two microphones. Merle Haggard also released timeless live albums from Bakersfield, and John Denver also released a double live album against the label’s wishes. Hank Thompson also released live at the Golden Nugget one of Las Vegas’s first live recordings of a Country artist.

The newfound quality of this album completely blew my mind as did the volume two of the Waylon Jennings series, and the songs on this album were in good form. The Tennessee Three also were in good form throughout this album as they played “A Boy Named Sue” and many Kristofferson hits like “Sunday Morning Coming Down”, and “Me And Bobby McGee”.

This is also a double album offering of pure Cash greatness so you can expect the Carter Family to all be quickly in tow as also were the Statler Brothers who were brought into the mainstream limelight by Cash, and the House Of Cash produced some of their finest albums. This concert happened directly after his television show was cancelled by the network, if you remember the story I wrote last year about Chance Martin getting a guitar from Cash which was given to Rob McNurlin, who recorded that Gospel album with it.

There are also the common core songs of his set like “Man In Black” and “Folsom Prison Blues” and also has many classic Gospel songs like “Rock Of Ages” and ‘Children Go Where I Send Thee” which on this album is a whopping seven minutes long with the full entourage of performers. So all in all it is indeed a truly fine addition to your record collection and I highly recommend adding it…I did…twice.