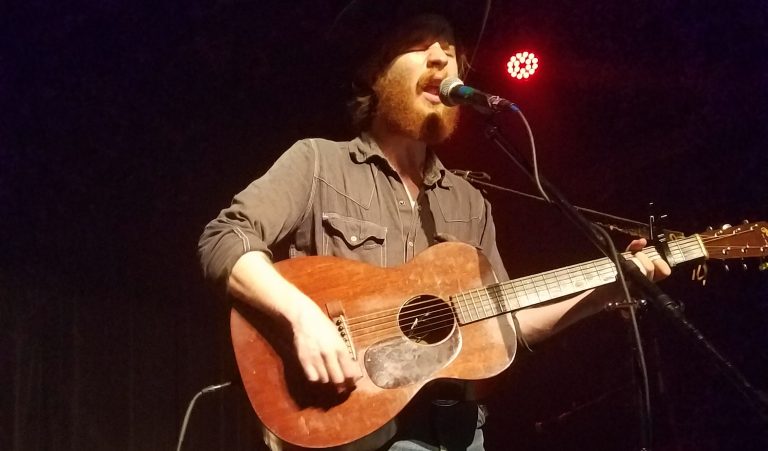 Folks as most of you know i cannot be omnipresent, and recently I looked around for some dedicated friends to help me do this. See now I’ll be able to cover more ground through the eyes and ears of others. Mr. Joshua has been my personal friend for many years, and I have a huge deal of respect for him as a person.

With that being said please take a moment to enjoy his coverage of an Atlanta show with these fine artists. I’m sure if this article is as well received as I anticipate we will publish more articles for other bands, that Mr. Joshua writes.

Last Saturday night I had the pleasure of heading up to Atlanta to see a show which featured Great Peacock, Colter Wall and Paul Cauthen at Terminal West.  I’ve been a fan of Colter Wall’s for a couple of years and this was my first chance to see him live. I was happy to be able to see him do a longer set with The Speedy Creek Band.  I was not as familiar with the music of Paul Cauthen or Great Peacock.  I enjoy Paul Cauthen’s debut record My Gospel and was looking forward to hearing some of those songs live.  However, I had not heard much of Great Peacock before this show.

Great Peacock performed a short opening set.  They mostly performed songs from their 2015 album Making Ghosts.  The group played through original songs like “Take Me Back To The Mountain” and “Desert Lark”.  The group has a sound that is very reminiscent of Whiskeytown.  Their brand of guitar driven alt country and Americana takes you back to those days.  They even did a Whiskeytown cover in their short set.  If you’re a fan of this kind of music, you can’t go wrong catching Great Peacock live if they’re playing near you.

Next up was Colter Wall.  He opened the show up solo picking through “Thirteen Silver Dollars” by himself before his band takes the stage about halfway through the song.  It’s a great intro to the show that puts the focus on Colter Wall as the star.  The band features Anna Blanton on fiddle and mandolin, John Clay on drums, dobro and backing vocals and Jason Simpson on bass.  He has a small band, but they help fill out his sound perfectly.

Colter Wall plays through songs from both his self titled LP and the EP Imaginary Appalachia.  He rounds out a full set with a couple of newer songs and covers.  He plays songs most fans are familiar with from youtube like “Railroad Bill” and “Saskatchewan 1881”, but he also plays new songs that people have never heard before.  As for covers, he mixes in a variety of songs such as Jimmie Rodgers “Mule Skinner Blues”, Ray Wylie Hubbard’s “Up Against The Wall, Redneck Mother” and the Ramblin’ Jack Elliot version of “Tramp In The Street”.

Colter Wall is a very talented performer whom I feel is going as far as he wants to.  He’s an amazing songwriter and his live shows will convince you of his talent as a performer.  He has a presence that draws everyone’s attention to him and his voice is reminiscent of the late Johnny Cash.  The thing I found most amazing that drew me in was his skills as a guitar player.  He finger picks everything with the skill of someone much older.  I feel like right now, he’s kind of where Sturgill Simpson was after releasing High Top Mountain.  He’s not quite drawing a sell out every time, but word of mouth is getting around with every show he plays.  I talked to a few people that night and I know a lot of folks either came for the first time because someone told them about him or saw him before and brought a friend.  It’s only a matter of time before he is playing larger venues.

Paul Cauthen finished up the night.  He brings a very different sound than Colter Wall with his band.  If you mix Texas Country with bits of funk and gospel, you have a good description of what you can expect from Paul Cauthen.  His guitar player is interesting as he can bring a bit of funk and spaced out sounds in addition to the typical country twang.  Paul Cauthen mostly worked through songs from his debut record “My Gospel” but he also includes other songs that aren’t on the record.  As for covers, he does a rousing rendition of Johnny Cash’s “Folsom Prison Blues”.  The highlight of the set for me was Paul’s acoustic version of “Let It Burn”.  He has an amazing vibrato and it really shows when he lets the band take a break and plays acoustic.  He finished off the night with “I’ll Be The One” and “My Gospel”.

Overall it was a very good night of music.  It might have been a disservice to Paul for him to go on last as many people cleared out after Colter Wall’s set, but it didn’t seem to phase Paul Cauthen and his band at all.  I highly recommend checking out any of these three bands if they come to your area.