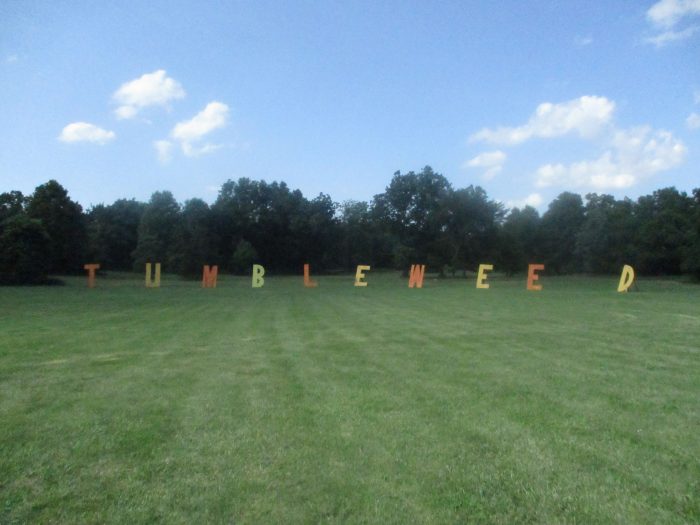 Friday at Tumbleweed 2018 began the first full official day of the festival.  I want to start this off by addressing camping. The actual camping area was a very nice wooded campground with plenty of shade for everyone.  Camping was divided up into various fan groups so you could camp near people with similar interests. There was also a quiet camping area. I will now address the hill.  You might have heard it called Stumbleweed Mountain or Buzzkill Hill. The “hill” that the campgrounds were located on is no joke. I wish I had got pictures of the hill but pictures do not do it justice.  After you climb this hill a few times, you will begin to question the life choices which lead to you camping on such a hill. I kid you not, it is no joke. Prepare for this hill in 2019.

After finding my way down the hill for the day’s festivities I finally got  a good overview of the entire venue. The main stage is huge and it’s in a field that is perfect to hold around a few thousand or so crazy country music fans.  The second stage which served as the main stage Thursday night was located towards the back of this field and under a tent. There was also a usual assortment of food vendors and merch tents.  This layout did provide some challenges which I will touch on later, but overall it was a good layout for the festival.

Next, I made my way over to the second stage to hear Justin Wells.  I am very familiar with Justin Wells and his music, but I have never seen his solo act with a full band.  It will be very familiar to fans of his “Dawn In The Distance” album or even fans of his previous band Fifth On The Floor.  While it is not heavy southern rock like Fifth On The Floor, the influence is certainly there with many of the songs having longer guitar solos.  I would call it a lighter version of the familiar Fifth On The Floor sound. Justin Wells did many favorites from the Dawn In The Distance album alongside some newer tunes.  Justin even brought Porter Union on stage for a surprise appearance during “Three Quarters Gone” which was a nice addition to his set. Justin is preparing a new solo record to be released soon.  Gary Hayes Country will have all of the details on that record as they become available.

After Justin Wells I moved over to the main stage to check out Dale Watson.  I would never grow tired of hearing Dale live even if I could hear him play once a week.  Dale’s set featured all of the hits you’ve come to know and love such as “I Lie When I Drink”, “My Baby Makes Me Gravy” and “Exit 109”.  Dale had Celine Lee out for a few songs as well. She did a track off her new record titled “Sayonara Sucka” and also performed some duet tracks with Dale.  I particularly loved the duet “Like Johnny Missed June”. Dale also played new tracks which will be featured on his album which is due out this summer.

Dale Watson looking out over the crowd

Tyler Childers with the largest crowd yet at Tumbleweed

Tyler Childers was up next on the main stage.  His band was on fire as always. Tyler brought his “A” game even though he was staring down the setting sun at one of the hottest parts of the day.  He started out with “Bus Route” and quickly moved through fan favorites from Purgatory and his unrecorded catalog of tracks. My favorites of this set were “Feathered Indians”, “I Got Stoned and I Missed It” and “Whitehouse Road”.  Tyler Childers is an act that seems to get better every time you see him whether you’re seeing him in person or on Youtube. His voice is truly like no other out there today.

Tyler Childers and The Food Stamps

After Tyler Childers I went over and checked out Alex Williams on the second stage.  I have been looking forward to seeing Alex Williams live since his debut album came out last year and he does not disappoint.  His set featured his debut record heavily with fan favorites like “Freak Flag” and “Little Too Stoned”. He also played some newer tracks off his next record such as the track “Dust and Bones”.  I was blown away by this one and it should be a lead single for his next album. It is that good. I look forward to being able to catch Alex Williams with a full set in the near future.

Following Alex Williams, I split my time between Bryan James on the second stage and Marty Stuart on the main stage.  Bryan James featured a full 5 piece band which featured Al Enzian on dobro. The set had a mix of covers and tunes off his Between The Devil and The Angel and This New Way’s Getting Old LPs.  This was the first time I noticed the second stage being drowned out a bit by the sound coming from the main stage but you wouldn’t know it from Bryan James’s performance. His band brought it and had their own crowd going wild the entire set.

Harry Stinson of The Fabulous Superlatives sings a song

Over on the main stage, Marty Stuart put on a clinic of honky tonk and hillbilly music.  Along with his band The Fabulous Superlatives, Marty put on one hell of a 90 minute set for the Tumbleweed crowd.  He played many of his fan favorites across his long career and did not leave anyone wanting. I always love hearing his version of “Orange Blossom Special” and it is a highlight of every time I get to see Marty play.  Marty even gave the spotlight to Harry Stinson for a few songs including a Woody Guthrie cover.

I ended my night with Marty Stuart’s set on the main stage.  I wanted to stick around for Jericho Woods on the second stage, but I was done by then.  I can say that I was able to hear a bit of Cody Johnson on the way through the festival grounds to my campsite.  I got to hear my favorite track of his “Chain Drinking” and a couple of cover medleys. It is worth noting that if you do plan on retiring to your campsite early during this festival, the music from the main stage is so loud you can tell which song the artist on the main stage is playing from your campsite.  That being said, I had no trouble passing out once I got to my tent. My report of the final day of Tumbleweed 2018 will be coming up on Monday featuring the likes of The Steel Woods, Ward Davis, Shooter Jennings and more.