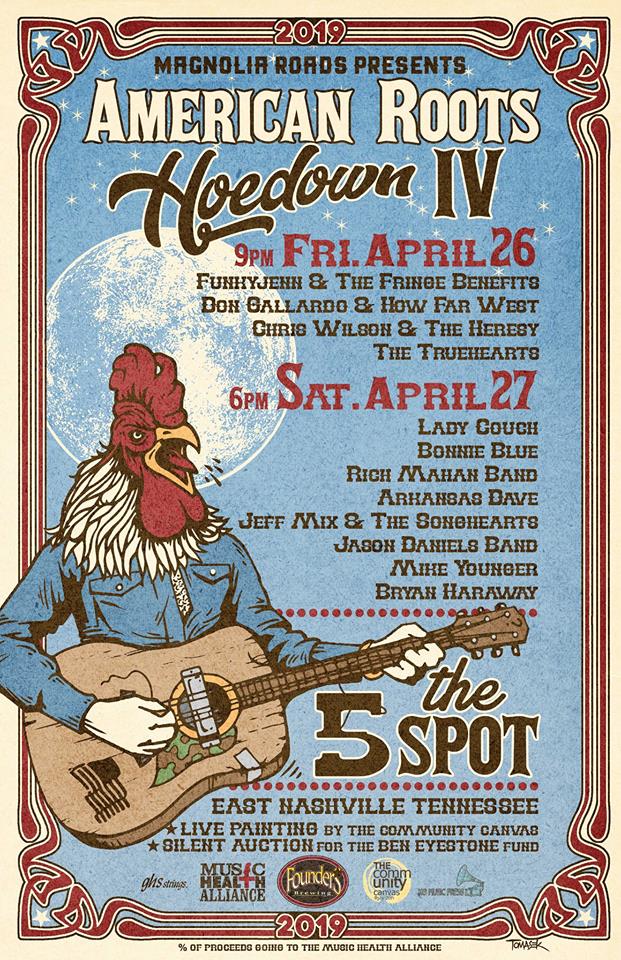 Featuring 12 Artists From Across America:

NASHVILLE, TN February 25, 2019 – Magnolia Roads presents the fourth annual American Roots Hoedown, inspired by the music that grew from the roots of America at honky-tonks and dive bars, juke joints and roadhouses to backyards and campfires. It will feature artists who epitomize American Roots music through their blend of Bluegrass, Blues, Country, Folk, Funk, and Rock n Roll, flavored with the deep grooves of the South and an occasional West Coast psychedelic twirl. A showcase of the Magnolia Roads family of artists and friends. Twelve bands over two nights The 5 Spot located at 1006 Forrest Ave., Nashville, TN 37206.

A portion of the proceeds from American Roots Hoedown IV will be donated to the Ben Eyestone Fund at Music Health Alliance. The event will include a silent auction to raise funds for the non-profit advocacy group; the Alliance provides for members of the music community.

Founders Brewing Co. is sponsoring the event and their brews will be available on draft and in cans both nights.

CommUNITY Canvas Project will be hosting a live art project for attendees who will be invited to paint, doodle, or play on a big blank canvas.

Chris Wilson & The Heresy, The Truehearts

Arkansas Dave will be debuting “Diamonds” video, song from his self-titled album, in conjunction with SXSW in March 2019. He’ll be releasing a new EP “Recorded Live at Music in the Park, Montreux Jazz Festival” this summer, followed by a brand new single in the fall.

Between tours and shows, Bonnie Blue is back in the studio recording their second album for release summer 2019. Bonnie Blue features GHS Strings endorsed artist, Willis Gore on guitar and vocals.

Chris Wilson and The Heresy have been touring in support of their latest EP “Downfall”. Chris also started a new concert series in Indianapolis at The Listening Room at Liberty Street hosting singer/songwriters (several of who will be performing at the American Roots Hoedown IV) in an intimate, engaging environment.

Since his 2 weeks in Mexico this winter playing the Tropic of Cancer music festival curated by the Cordovas band. Gallardo has been in the studio recording a new EP with his band. He has added Lilly Winwood to help with vocals giving the songs a new direction with male/female vocal harmonies. Gallardo plans the EP summer 2019 prior to his UK and Germany tour.

Funkyjenn in pre-production for 2019 release. She will be in studio later in the year with new 10-song album “Pagan Creek”.

Jason Daniels Band is  wrapping up recording “Downloads from the Universe” to be released fall 2019.  The album is being recorded to tape at the historic Malaco Studios in Jackson, MS.

Jeff Mix & The Songhearts released a cover of “Wolfman of Del Rio” on New Years Day 2019 to honor one of Texas’s true songwriting treasures, Terry Allen.

Lady Couch is currently preparing to record their debut album which will be released in the future.

Younger has been back in the recording studio finishing a project originally recorded in 2001 with Levon Helm, David Hood, Spooner Oldham and Jim Dickinson. Release date TBD.

Rich Mahan has completed the follow up to ‘Blame Bobby Bare,’ his 2013 Top 40 Americana album. ‘Hot Chicken Wisdom’ will be released this spring.