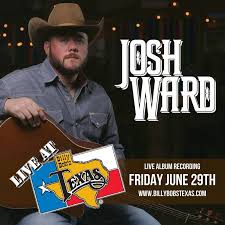 One of my all time favorite concert collections that exist is the Live At Billy Bob’s Texas series, and I pretty much rush out and buy all the latest ones. Well, now on June 29th Red Dirt/ Texas country road warrior Mr. Josh Ward who is riding high on his 2018 new album called “More Than I Deserve”, recorded the fiftieth album in the series overall.

You know his album is already on my radar for TOP 50 of 2018, and I’ll be honest he may hit it TWICE if this live album is any good. I do include live albums, and I am eagerly awaiting this one in my player. His first single called “Home Away from Home” was a damn fine Honky Tonk shuffle song complete with all the bells and whistles of a GREAT Country music album.

All eleven songs on this album truly are relatable to me as a fan, and compliment each other truly well. I just love the arrangement of the lyrics and the way the fiddle and steel accompany his honest lyrics, I hear a LOT of Mr. Dwight Yoakam influence in his songs like “Another Heartache”. Also, I hear a lot of Mr. Daryle Singletary in his vocal deliveries, this album makes you want to crack open a cold bottle of your favorite beer and take up smoking Marlboro.

My friend from Kansas City Wildflower Soul Photography got to capture his VERY FIRST headlining show in Texas at Gruene Hall this past spring,and she did a mighty fine job of capturing that show on photo. In the business we kind of help each other out, and I got her to Shooter. Last year I got to name one of my Tumbleweed articles after her “Queen Of The Railriders”, because I SAW TRUE passion for the music in her.

In fact his camp announced that on September 2nd he will be returning to the iconic dance hall to headline another night of Country Music, to which I think he so richly deserves!