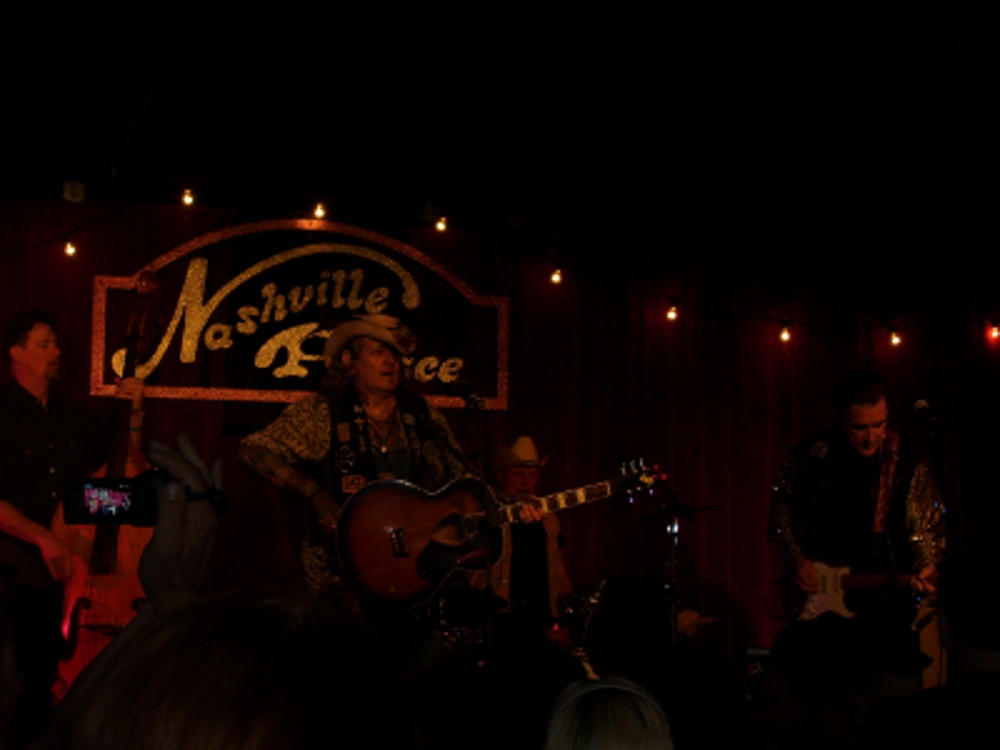 The Main ballroom was HUGE and it had a lot of room but not many tables and chairs. It was kind of hard at times to do “my thing” but I got around it in some ways. It was a nice venue but I had trouble hearing the next band The Frantic Rockers who played blues and rock. They are signed to a label I am familiar with called Rhythm Bomb records which also has Jason Lee Wilson. Their vocals were hard to focus on for me, I’m not sure if it was where I was camped out at or if it was the band but I just couldn’t make out any of the songs accept for their opening song was “all Through The Night” and they followed that with “All Night Long”.

I have researched them and they have several albums and their music is really nice and I hope maybe someday I will get another opportunity to feature them on this website again. I will say I was very impressed with their guitar solos and how much soul the band had in their music. They had the place jumping around for sure!

The next band is a west coast LEGEND and was the another of my top 3 acts of the whole festival. Yes Sir sitting at number 2 in my opinion was Big Sandy And The Fly-Rite Boys. I mean heck at fourteen albums and twenty five years of music how can you not call him a Legend? AND PLUS this was a close tie for first place between these two bands.

I missed his first song as I was busy yapping with old friends about some future projects I have going on with another venture (out of respect to Muddy Roots name dropping is not needed). So when I heard them going on I rushed in to catch him playing “Heaven Is The Other Way” followed by “It’s Time”. Both of which were really good choices as I’m sitting here wondering WHAT he’s going to play with so much material TO PLAY?

REALLY GOOD follow up song “Spanish Dagger” was next, MAN they really blew the roof off the main ballroom. I am very sad they do not get over to my side of the country more often, much like the Pine Box Boys or the Three Bad Jacks. When it comes to underground music when they come out here YOU MUST go see them! “Slow Down” and one of my favorites “Don’t Let Me Know” was next. VERY cool the way he sings that song and he just stands up there and puts on a hell of a show.

After playing a Carl Perkins tune he went back to the beginning and played the FIRST SONG off their FIRST album which came out in 1994! I was fresh out of high school right around then and I’m 42! He played “Hot Water” and played “Wishing Him Away”. Both those songs I NEVER thought I would EVER hear live, leave it to Muddy Roots to do that! Jason Galaz makes musical miracles happen…I’m happy to be in the crowd all these years.

He played “Miss Tracy” next and went right into “Catalina” and “Tequila Calling”. He then went to another of his early albums and played “Chalk It Up To The Blues” and he closed his set with “Jumping From 6 To 6”. All together I was wishing he would have got to play a longer set but hell I was waiting for some other bands too.

Bloodshot Bill was another act I had trouble hearing well.
I was also having a conversation with the Rusty Knuckles guys about some things and I did get to catch him perform Baby Don’t Go” and some other songs. He played a really good instrumental he called “Tidal Wave” and another song I recognized was “Puppy Dog Love”.

The Bellfuries man what can I say other than they ARE furies. They were
another band that truly had my admiration in many forms. They opened with “Sad And Lonely” and from the start they tore apart the stage. They have such a frenzy of guitars and a beat that cannot be duplicated by any band.

They played “Take It To The Chapel” and that was a great song I researched before this festival began. “Must Be A Loser” was another of their songs I knew for sure, they played two I didn’t recognize. “Up To Your Old Tricks Again” was one I knew of theirs and they played one cover I knew before they went into “Loving Arms” and “Just Plain Lonesome”. After it was all said and done the first full day of this festival was FUN and I already look forward to 2016.