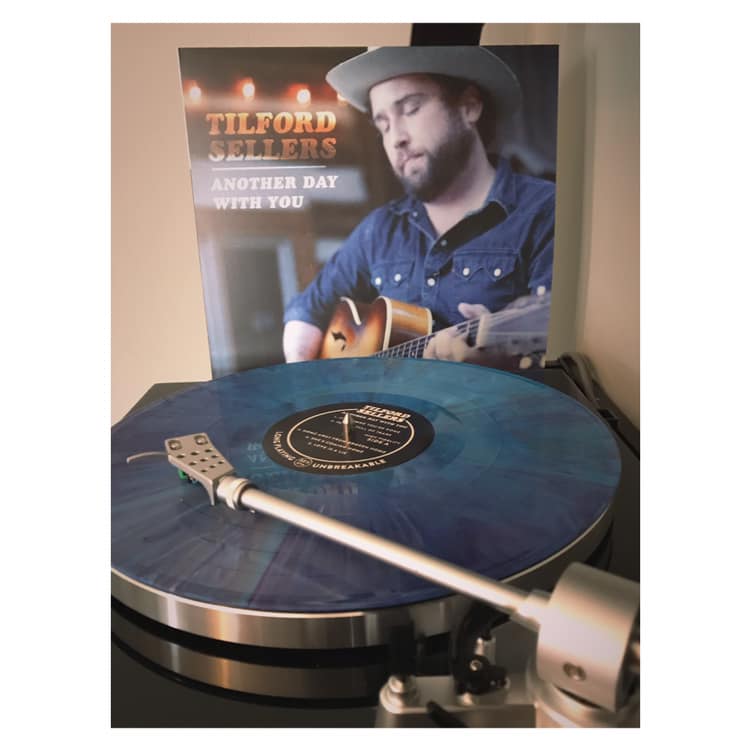 Back a few years ago in 2014 at Muddy Roots , I finally got the chance to cover a set on the wood stage by one of local music’s most talented young men Mr. Tilford Sellers and his band The Wagon Burners. He blazed a Honky Tonk trail through the underground of Indiana and many festivals, and he loved and appreciated vintage Country music like I did. He and I had a mutual respect for one another, and our brains connected from the moment we met. We pulled over and had a lengthy conversation about our insatiable appetite for steel guitar TONE and PROPER stage attire, people like Porter Wagoner inspired him, rhinestone suits and record label stickers. He LOVED the Sun Records label and KNEW the difference in releases from MCA and RCA, like I do.

In late January 2018 Mr. Patrick Bowman AKA Tilford Sellers was killed by a tow truck driver under the influence of meth, who carelessly ran a stop sign and crashed into Mr. Patrick, and other drivers, killing him. In Columbus Indiana he was with his fiancee in his car and was killed by a man named  Ruel Pedigo, this from a news article:

The charges followed a nearly four-month investigation that found Pedigo had Methamphetamine in his system when the tow truck he was driving ran into several vehicles at a stoplight on State Road 46 in late January.  The crash killed 36-year old Patrick Bowman and seriously injured Bowman’s Fiancee, Sarah Fliehman.

“Columbus Police, with the help of State Police went through airbag diagnostics, downloaded information from vehicles that were involved in the crash,” said Columbus Police Lt. Matt Harris.  “They also looked at nearby security camera footage.”

Harris says the key evidence came from a blood draw from Pedigo shortly after the crash occurred.

“When we received the results back, it showed Mr Pedigo had methamphetamine in his system” Harris said.

“Patrick was a loving fiancé, brother, son, and valued friend to many,” a family statement said.  “There are no words to describe the devastation we all feel.  Patrick’s death has left a horrible void in so many lives.”

“We believe Patrick would want to be remembered for his music,” the family statement said.  “Patrick was one of five nominees by the Ameripolitan Music Awards for the 2018 Honky Tonk Male Artist of the year.  His music career was looking brighter every day.”

Bowman’s family says he was in the process of recording an album at the time of his death.  That album is now set for release in late summer or early fall.  All proceeds from the album will go to a scholarship fund in his name, administered through the Heritage Fund of Bartholomew County.

The fund is taking donations for the scholarship.  A link to that donation website can be found HERE.
According to Mr. Patrick’s family there will be a hearing on March 25th for the man responsible for his death, and a jury trial is scheduled for May 14th 2019.  I will be keeping an eye on the outcome of this incident, as well as the information in this article.

I am EXCITED to be one of the first press sources to release this announcement of an ALL NEW ALBUM of music from Tilford Sellers called “Another Day With You” , and this will be available on CD AND vinyl album. It will be on both black and blue vinyl, complete with detailed insert jacket. ALSO the rough version of his vocals will be made available, however the name of that has not yet been revealed. The cover of the rough vocals will be different featuring all of the musicians involved, and all of the proceeds for this project will be donated to the Patrick Bowman Memorial Music Fund administered by the Heritage Fund Of Bartholomew County, Indiana.

Thanks to Mr. Ryan Payton for capturing these songs on this forthcoming album I am about to tell you about, Mr. Ryan played steel guitar on this album as well as the electric guitar and mandolin and more. Mr. Wes Eberhardt played bass, Mr. Justin Meier played upright bass, Mr. Thom Woodward played electric guitar. Mr. Brad Wallace played drums and Mr. Jerry Miller played electric guitar and more. Tilford Sellers began recording this album in November of 2017, and was only partially completed when he was killed.

He was in the midst of being nominated for an Ameripolitan Award in Memphis for Best Honky Tonk Male, and on the day before his fatal accident he recorded the vocals for this album. I was told he only needed one take for every song, that’s how passionate he was about the lyrics.

His band rallied together and used his actual guitar and pedal systems, and his own amplifier to complete the guitar work. They spent many many hours in the studio making this album. They followed all of his actual written notes and arrangements, and played everything exactly as he would have done it.

Now, according to his family there will be two record release parties for this. One will be in Indianapolis and another at a location I haven’t been told about yet.  As soon as I get a link for this album to purchase I will include it on here to purchase, as I shall be purchasing it myself for sure. This statement is from social media here:

Another Day With You by the late @tilfordsellers will soon be available on colored/black LP, CD and digital download. There will also be a CD of the demo versions of each song.

All proceeds from each sale will go to the Patrick Bowman Memorial Music Fund. Recipients of this award may use the money for tuition and/or music related expenses such as music lessons, equipment, travel, studio time, etc.