News On The Barnyard Stompers. 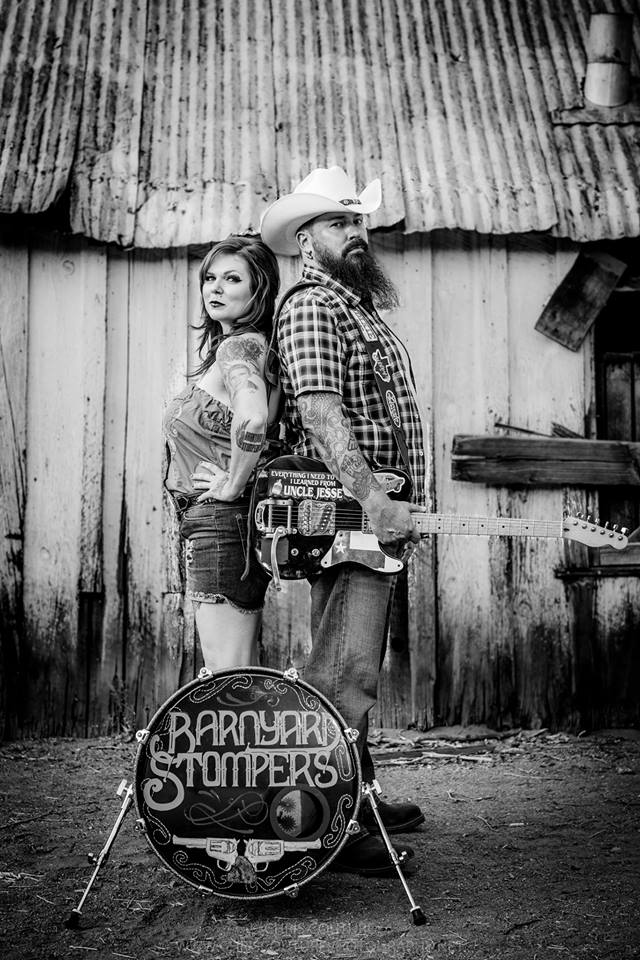 Hi everybody I recently stopped for a moment to talk to those Barnyard Stompers that road dog relentlessly through the United States playing their gritty Honky Tonk, Heavy Rock all rolled into one big show. Miss Megan Wise on drums also plays a guitar (DON’T as k me how), and Mr. Casey Miller plays guitar. Mr. Casey had this to tell me tonight:

Its the first record I’ve written for us, doing just what I wanted to do without anybody’s  expectations but ours,  and we’re really proud of it. We’re on the road indefinitely, and will hit most of the country this year. We did a video for Outlaws with Chainsaws Part II that Bob Wayne directed (I have included that below).

OK so with the cover photo and others that were recently shot with their weight loss and ONE HELL of a photographer Mr. Chris Couture who was kind enough to provide my website with his wonderful promo shots.

In honor of us losing a combined total of 80 pounds, we’ll be taking lots of new promo pictures this month. We’re over halfway to our goal and we appreciate everyone’s love and support in our journey! Thank God whiskey is still on the menu 😉
We can’t thank y’all enough for the support whether it’s coming to our shows, posting about us online, buying our merch, giving us fresh local food when we come to town, bringing drinks to the stage, or requesting our songs…YOU are what keeps us going and gives us a reason to drive town to town year after year!

The song called “Roll On” was truly funny shit folks, this man gets invited to a pop country party and there’s a line in there about them taking selfies that made me spit out my coffee! You know basically this album is pretty much just an all out JAM, that needs no major analysis, but at the same time it does have hidden links to the first album. It’s not a bunch of complex hard to understand stuff, these two pretty much play straight up your ass Honky Tonk Redneck Rock music! Don’t get me wrong I LOVE elaborate acoustic songs, but sometimes I LOVE to rip off beer caps and tear into a few cold long necks with loud balls to the wall Barnyard Stompers music.

“California Kicker” was funny to me too, I don’t mind the punk rock guys either really, they DAMN WELL DO keep Johnny Cash and Hank alive! Many of the scenes involved with Roots Music have all been really nice to me in the past years,because they KNOW that I’m there to embellish their scene with my articles.

And dammit it wouldn’t be a Barnyard Stompers album without that hallowed saw, I mean that thing is family AND the law. If you love crazy horror laced Outlaw music then THIS BAND is right up your alley folks. Because they are truly gifted musicians and truly nice people, don’t be afraid to stop by and drop them a HELLO, and tell them I sent you.