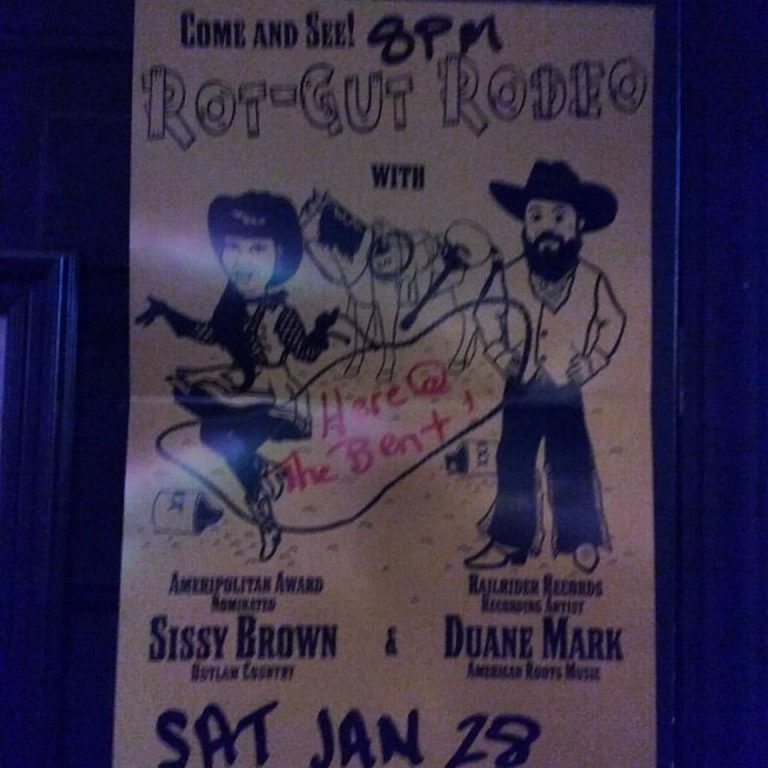 Tonight I ventured out to Clarksville out on Hwy 12 wherein lies the Bent Wrench Roadhouse which is a Packers bar embellished with much memorabilia of said team. Now mind you, this is a beer only establishment but you can bring in your own hard liquor and buy a cup of ice.

The food was presentable and was VERY good in fact I would venture out that way just to eat, it was truly that good. the pizza was frozen but doggone it I enjoyed it, and the appetizers were reasonably priced. Just an ordinary run of the mill corner roadhouse with a NICE smoking area and small stage for music. Actually for acoustic acts I thought it was quite comfy and quaint to have it, and the crowd was well receptive to them.

So like I have been previously doing with similar articles of this ilk I shall include all of the information about each of these acts separately in two sections tonight. Miss Sissy played first however I wanted to touch dwell upon Duane Mark as my first artist here depite them changing sets from hour to hour. They are on tour together for several weeks and stopped here before having the day off and heading to St. Louis..I hope the hot chicken was good y’all.

I covered Miss Sissy late last year and haven’t crosed paths with Mr. Duane since Crooked Smile Festival in 2015 in Winchester Indiana. The video below is a cover of Social Distortion’s called “Ball And Chain”.

He began his set with a song from the TV Show The Trailer Park Boys called “Liquor And Whores” that the charachter Bubbles plays followed by a song called “Happy Hour”. I requested one of his older songs, however most of his setlist tonight was off his newer albums. “Miner’s Blues” was included tonight as well as an Eagles cover “Take It Easy”.

If you catch this show in your area ask him about ear goggles, and listen to his stories about picking up his buddy “Homeless Dave” whom actually will be included in my further steel guitarist series in the future. As he plays “Hobo Insane” he touches on that story, he also played some songs by the White Buffalo called “Every Night” and “Bar And The Beer. In addition he played one called “How The West Was Won”, and as he played “I’ll Fly Away” he was well recieved by the crowd here.

“Red Letter” was next and “Beer:30” and then he went into a new song  called “Lonely Wheels”which will ONLY be available by purchasing his latest album on vinyl, and that album is called Land Of Opportunity And Sorrow. It shall be available for purchase on April 28th 2017, so go pick that up.

“Brittle Flower” was also included as well as “Stand My Claim” and at the end of his set they did some duets like “Jackson” which was really good, I think their vocal abilities compliment each other quite well. He closed his set with Roger Alan Wade “if your’e Gonna Be Dumb You Gotta Be Tough”.

Miss Sissy I covered not too long ago at Belcourt Taps on an entire weekend music show binge, what a wrecker that was! Speaking of which of course I requested her to play “Homewrecker”. She opened her whole set with a cover fo Hank 3 called “Not Everyone Likes Us”, and “Lone Star” by Norah Jones.

Roger Miller’s “King Of The Road” followed by “Birdcloud” were included in this set of hers as well as her story about being in love with her bass player and having to leave him somewhere on the road. That song is called “Leaving You Behind”, and she played “Your Cheat’n Heart” of course that was Hank Sr.

“Will The Sun Shine On Me” was another one of her originals she played tonight before she played “Mama He’s Crazy” by the Judds and one of Loretta Lynn’s very first charted songs form 1960 on a locally funded record label called Zero Records. It was her first commercially released single even though “Whispering Sea” was her intended first debut release.

Cody Jinks “Last Call For The Blues” and “Long Way From Home” were next followed by her own song “Last Resort First Regret”. She celebrated missing her good friend Jon Emery out there in California with his song called “Last Real Bar In California” and another of her own songs called “He says”.