Sun Records Cafe is Great But NOT The First 24 Hour Diner On Lower Broadway. 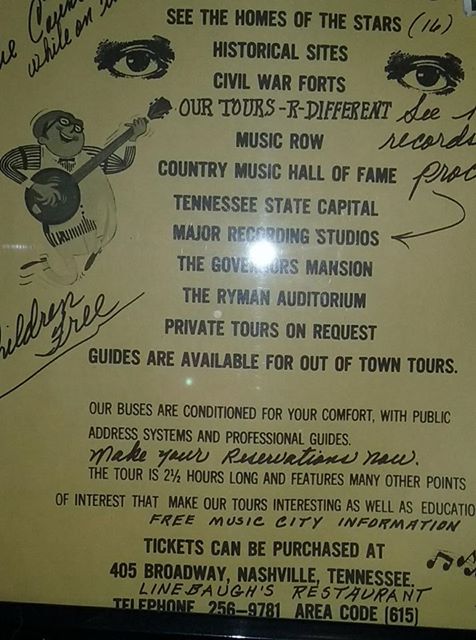 I have many friends that were born into families of Country Music and have shared so many stories with me of what Nashville was like in the late 40’s and early 50’s, when the world of Country Music came to an abrupt halt upon the untimely death of it’s most notable superstar Hank Williams. Hank Williams left a void in the hearts of the entire world in 1953 when it was announced to the world he was dead at 29. Wall street stopped, China called our president and offered condolences and the state of Alabama witnessed the largest public gathering in it’s history when they buried him.

Back then the Opry was still at the Ryman Auditorium every weekend and after it the Midnite Jamboree which was created by Ernest Tubb rolled on until the wee hours of morning. There were many that stopped at Tootsie’s to become intoxicated on their way to the Jamboree from the Opry as it was right there. BUT what Sun Records Cafe failed to mention when they initially opened and boasted that this cafe was the first of it’s kind was the iconic Linebaugh’s.

There has been many clubs and diners in that area come and go and many of them were 24 hours as well, now I’m NOT saying this Sun Records Cafe is lying or falsely advertising…I’m just saying they didn’t do any  homework.  They failed to talk to people like my friend Miss Lynn Woodruff Gray who wrote quite possibly my favorite book of 2016 “I Guess You Had To Be There”.

Many of the stories that book contains revolves around the constant presence of Opry stars and touring acts that ate “The Worlds Greasiest Beef Stew” there. One story of Roger Miller taking Charley Pride’s breakfast and making him wait for his was a true classic story, I highly suggest checking out her book. And the pinball machines they had there even Mr. Keith Bilbrey told me once Waylon still owes him several rolls of quarters!

Now whether the Sun Records Diner is the first of it’s kind FOODWISE that might be a true statement altogether however for anyone to boast they are the FIRST 24 HOUR diner is uniformed and just plain out crazy. This cover photo is from my personal collection of stuff and one of the only things I have of Linebaugh’s.

This a poem of long lost Nashville Music Row folklore that Country music Songwriting Legend Shel Silverstein wrote as David Allan Coe,who used to order one order of mashed potatoes mixed with corn. No meat just the taters and corn. He literally lived inside of a hearse parking it in front of the Ryman and calling himself the Mysterious Rhinestone Cowboy until Glenn Campbell cut the song of a different tune, literally, looked upon Mr. Shel as ge wrote this.

The Devil walked into Linebaugh’s on a rainy Nashville night
While the lost souls sat and sipped their soup in the sickly neon light.
And the Devil, he looked around the room, then got down on his knees He says,
Is there one among you scum who’ll roll the dice with me?

Red, he just strums his guitar, pretending not to hear
And Eddie, he just looks away and takes another sip of beer
Vince, he says, Not me, I’ll pass, I’ve had my share of hell,
And kept scribblin’ on a napkin, some song he was sure would sell.

Ronnie just kept whisperin’ low, to the snuff queen who clutched at his sleeve,
And somebody coughed—and the Devil scoffed—and turned on his heel to leave
Hold on, says a voice from the back of the room, ‘fore you walk out that door
If you’re lookin’ for some action, friend, well, I’ve rolled some dice before
And there stood Billy Markham, he’d been on the scene for years.
Singin’ all them raunchy songs that the town didn’t want to hear.

He’d been cut and bled a thousand times, and his eyes were wise and sad
And all his songs were the songs of the street, and all his luck was bad
I know you, says Billy Markham, from many a dark and funky place
But you always spoke in a different voice and wore a different face

While me, I’ve gambled here on Music Row with hustlers and with whores
And, hell, I ain’t afraid to roll them devilish dice of yours
Well, then, get down, says the Devil, just as if you was gonna pray,
And take these dice in your luckless hand and I’ll tell you how this game is played

You get one roll–and you bet your soul–and if you roll thirteen you win
And all the joys of flesh and gold are yours to touch and spend
But if that thirteen don’t come up, then kiss your ass goodbye
And will your useless bones to God, ‘cause your goddamn soul is mine!

Nobody’s ever rolled a thirteen yet, but this just might be the time
Then Billy Markham, he takes the dice, and the dice feel as heavy as stones
They should, they should, the Devil says, ‘cause they’re carved from Jesus’ bones

But I just wanna say ‘fore I make my play, that if I should chance to lose
I will this guitar to some would-be star who’ll play some honest blues
Who ain’t afraid to sing the words like damn or shit or fuck
And who ain’t afraid to put his ass on the stage to make a buck

But if he plays this guitar safe, and sings some sugary lies
I’ll haunt him till we meet in hell now gimme them fuckin’ dice

And Billy Markham shakes the dice and yells, Come on, thirteen!
And the dice, they roll and they come up blank, you lose! The Devil screams
But I really must say ‘fore we go our way that I really do like your style
Of all the fools I’ve played and beat, you’re the first who lost with a smile

Then, arm in arm Billy Markham and the Devil, walk out through Linebaugh’s door,
Leavin’ Billy’s old beat-up guitar laying on the floor
And if you go into Linebaugh’s now, you can see it there today
Hangin’ from a nail on that wall of peelin’ gray
Billy Markham’s old guitar…That nobody dares to play.

I believe the ultimate demise of Linebaugh’s was the 1974 decision to build the Opry house and put it over by Opryland theme park. See Lower Broadway in the 1970’s was a dark and dangerous place, and the Opry attendance was rapidly declining. People didn’t want to stand outside in long lines in a bad neighborhood like that, so in 1974 Country Legend George Morgan was the last person to perform the Opry stage at the Ryman.

He also became the first person to perform on the new stage at Opryland. Many things transpired in that transitional period like the Osborne Brothers began playing Rocky Top with unplugged instruments once again to the applause of many Bluegrass purists. Rocky Top which became the Tennessee state song in 1986 and written by Felice Bryant was the first Bluegrass song played with plugged in instruments while at the Ryman.

This was just something I have been pondering for the last few months and decided to write about what I think when I ponder this subject. I truly think it’s simply lack of care for history and tradition to make statements based on “change” or “Evolving times” or whatever these suit and ties think they want to call it. I just call it “sad”.