The Nashville City Winery Welcomes The Riders In The Sky. 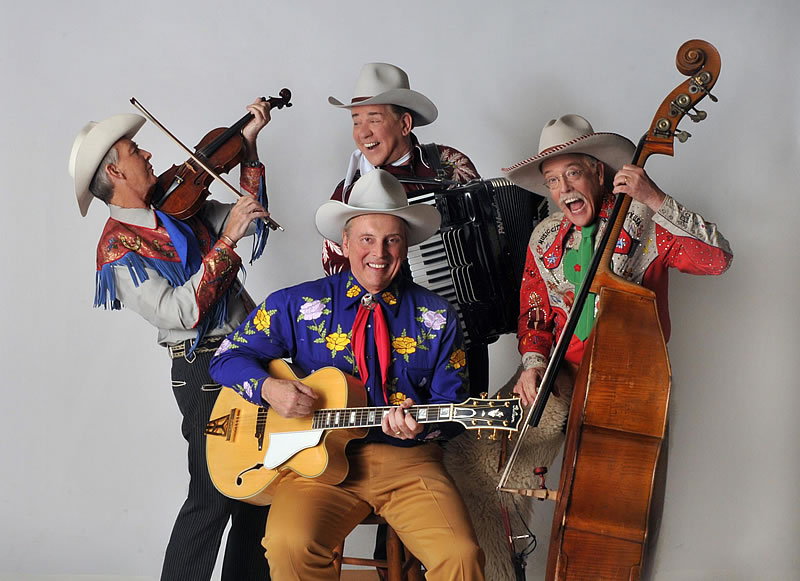 Those fine folks at the Nashville City Winery have brought ANOTHER doggone fine show to their roster.On January 18th they bring to you The Riders In The Sky.

Since 1977 Ranger Doug Green, Fred LeBour, Joey Misculin and Woody Paul have brought their western comedy and western humor to stages all across the world.
They have been featured on the Opry over 700 times, and hosted segments of it as well.
For much of their tenure, the group was a trio: lead singer/guitarist Ranger Doug (Douglas B. Green), singer/fiddler Woody Paul (Paul Chrisman), and singer/bassist Too Slim (Fred LaBour). In the 1990s, the group re-added Joey the Cowpolka King Joey Miskulin on accordion, who had been with the group for a brief period in the 1980s. They usually introduce themselves as “Ranger Doug, “The Hero of American Youth”, “Woody Paul, the King of the Cowboy Fiddlers”, “Too Slim, the Man of a Thousand Hats” and “Joey, the Cowpolka King”. Ranger Doug Green is also one of the front members of “the Time Jumpers” which consists of many people and is highly regarded as a Country Music Supergroup.

They perform in a sketch like manner and usually act upon themes of sorts. They are well known for yodeling and making face popping noises while singing and playing their songs about the range.They are a well renowned children’s band and were featured on Toy Story 2 and Barney and many other shows.

Riders in the Sky perform authentic renditions of old classic cowboy and Western songs, as well as original works and various comedic skits and songs. Their sketches often include allusions to something being done in a dishonest or lazy manner; with Ranger Doug typically responding to this observation by saying “You fellers know that that would be the easy way. But it wouldn’t be the cowboy way!”

I’m loosing reasons to go to the Opry after loosing Little Jimmy and George Hamilton this past few months and so many others it’s becoming slim to find the GOOD ones left…almost TOO SLIM….But The Riders In The Sky are sure to bring greatness back to the Opry stage again and again.