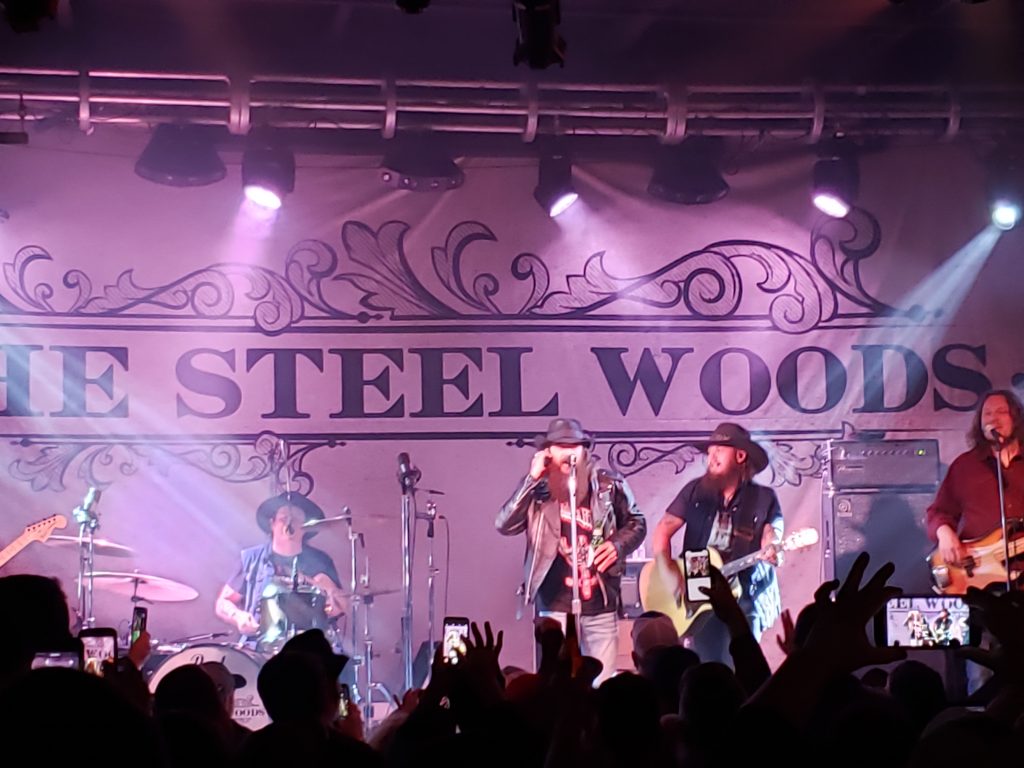 As I type this I am sitting in my truck watching cranes work on what is to be the new Jimmy Buffet Margaritaville restaurant. The downtown area is rapidly changing, and not always for the best..no many times it is totally to the detriment of history and tradition. It immensely pains me to see places like Bobby’s Idle Hour going away, to be replaced by condos. According to the statistics, Nashville is growing at an uncanny rate by 100 people PER DAY!

But I’ll tell you what, no matter how much Nashville changes, some of the smaller venues are the same. Now, some of the smaller venues are actually not small..like the mighty 3Rd and lindsley. Here I am again to bring YOU TWO NIGHTS of mayhem and music. I’m going to be here for two nights this weekend folks, and tonight I shall be reporting on the show from the upstairs area. Tomorrow I shall be working downstairs. Both nights are pretty much sold out and jammed packed.

I’m extremely excited for THREE reasons…ONE is NEW music from this powerhouse band of men from Nashville that are growing at an exponential rate. Their hard work and no holds barred attitude has solidified them within our local music community, and maintained a big draw for them on the road as well. Their new album “Old News” is already garnering attention from us and other websites like my buddy over at Country Music Armadillo.

The SECOND reason is the RETURN of Mr. Rowdy Cope, who helped invent this band. He needed to take some time off for personal issues and to rest, however now he IS BACK and they are reportedly ready to play like a well oiled machine.

The THIRD reason is one of my newfound friends whom was formerly with Mr. Whitey Morgan And The 78’s. His album was on my TOP 50 OF 2018, and that man is Mr. Josh Card And The Restless Souls. His debut album ‘With A heavy Heart” wowed me, as did his first live performance I watched on New Years Day 2018, right there I saw HUGE potential as a solo artist. My partner Mr. Joshua Wallace covered his album release party, and you can read that HERE

Mr. Josh Card  is playing first here tonight, as well as tomorrow night and will be on tour with them for some time now. I have a pretty good seat back here upstairs to watch the show from both perspectives this weekend, and I have pretty much everything I need to make a perfect article here tonight.

Mr. Josh began the show with aggressive energy as he opened with a song called ‘Better Off That Way”, and he had Mr. Brett Robinson playing steel for him tonight. His former band mate when he played for the 78’s, Mr. Brett brought his signature tone to us tonight. Especially on the second song called “Devil’s Blood”, which gave him some truly fine solos before he kicked off the song called “Suffer”.

He explained that when he wrote this one, he drank too much whiskey and listened to too much Ray Price. I love the lyrics to this song, and it’s my favorite song on the album by far. It is a damn fine two stepper, with a shuffle thump. he followed that up with the song called “Won’t Chase Your love Anymore”.

You know guys, this young man is MUCH more comfortable on stage here, I really feel he is becoming more comfortable up front, being the center focus. He played a very good performance of the song “Choice To Make”.  He did play a cover song of Merle Haggard called “Ramblin Fever”, from the 1977 album of the same name.

The steel Woods came to bring the house down! As their new album has brought RAVING reviews to the media world, and as I previously stated Mr. Rowdy coming back, this band is at a pinnacle of growth. The only way for them to go is up, and as they enter to the eerie version of “In the Pines” UP is where the went.

They began with “Axe” tonight and drove this place into a complete frenzy of screaming voices and swinging fists, with their rough harmonies. The first song from their new album called ‘Old News” was called “All Of These Years”.

“Without You” was a song I could have used a few years back when I got my divorce, it is a song of moving on and putting the past behind you. Another new song was called “Blind Lover”, that featured some damn fine guitar slinging riffs. This show included some truly fine songs off the first album like one of my favorites called “Della Jane’s Heart”.

Mr. Wes  explained to us that the new record was a lot of work, and it was a long time coming however they were still going to play songs off the old album, like the self title called “Straw In the Wind”.  Speaking of self titled songs perhaps one of their more well written songs was “Old News”, it is a truly tough song about America. This song has perhaps one of the BEST LINES I have heard in many years “And pray for Miss Liberty and the crack in her bell, there’s a tear in her eye, but her arm hasn’t fell”.

Next up was a song called “Rock That Says My Name” ,basically tonight I am jusy enjoying the music and watching. Tomorrow I will indeed take many more pictures from that show. Right now they are playing the GREAT song “Let The Rain Come Down”.

They are playing some songs in honor of folks that passed away, one of them was the song called “One Of These Days”. That is the concept of the title of “Old News”. But right now they are playing “Are The Good times Still Over” from Merle Haggard’s, and they followed that up with their powerful version of “Whipping Post”. You cannot deny this band ANY CREDIT whatsoever on ANY front, especially for a twenty dollar ticket!

“Southern Accent” was another great pinnacle of tonight’s show. Afterwards they played a few more for an encore here, like “Better In The Fall”. Also included was an instrumental before playing their cover of “Hole In the Sky”, and that was the end of Friday’s show.

I have bigger expectations of tonight’s show over last night. One of the main reasons will be to see how the set list difference is for both acts. This place is crazy packed full of people who are ready to hear the new music from both bands. Tonight is the sellout show that toppled last night in sales, I haven’t seen this place this packed since Mr. Cody Jinks played here last. Speaking of Mr. Cody Jinks he actually showed up tonight as my partner Mr. Joshua told me the Flockers were talking about him being there. He came out on night 2 and sang with them.

Everything so far has been absolutely amazing in every way, good food and great friends. New fans and old ones as well came out for two nights of music. I wanted to point out Mr. Jay Tooke one damn fine drummer, who sweats back there behind the kit night after night, and tonight those boys are playing the Opry. Also, Mr. Johnny Stanton is a damn fine bass player. Every time I am watching this band, the never fail to disappoint.