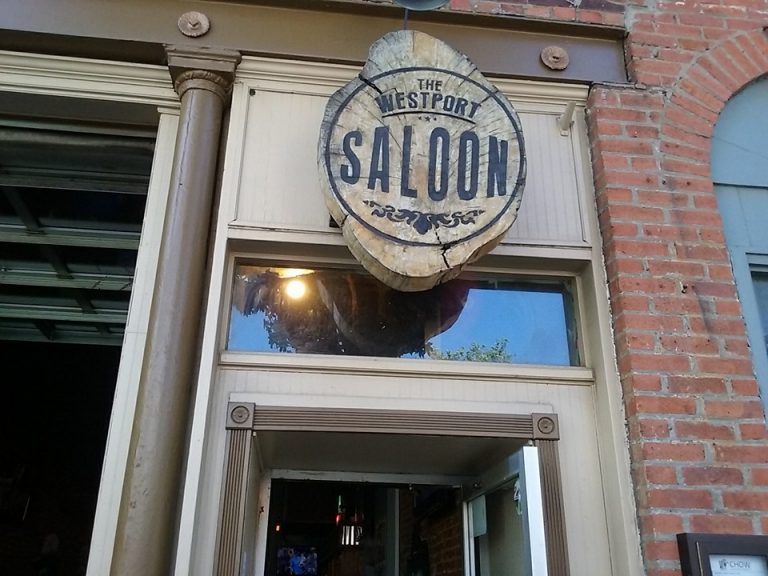 I have to admit folks right I’m VERY excited about things to come today, as I relax in the hotel before heading out to Kansas City Missouri. Right now I am about 60 miles out of town in a really reasonably priced Travelodge hotel, the coffee pot sucked. We are going to leave our belongings here and journey on to the festival and sight see because I have to report to my stage manager at 1:30.

The Westport Roots Festival has been especially hospitable to me and my help today and for the FIRST TIME EVER I’ll be hosting my very own stage. Ernie Biggs Westport and Langunitas Brewing Company bring YOU the Gary Hayes Country Stage for the second annual event.

At the beginning of the morning upon our arrival Mr. Travis the Owner of the Westport Saloon gave us the grand tour of the whole district and everyone was so welcoming and good to us we were humbled. One of the finest welcomes my website has had along with Muddy Roots. The staff at Little Class Records and the Westport and all of the other venues involved were truly remarkable in every way and made you feel so at home there. The Ernie Biggs Staff was equally kind to my crew and myself, and people like Mr. Matt Dennis were always checking on us.

The Bastard Children Of Booker Noe is sort of a side project by some local guys from the Kansas City area that just got together this week and will be backing other bands too. Mr. Tyler plays steel guitar for people as well as guitar for this new band.

I got the opportunity to introduce these bands tonight and throughout these articles I shall be mentioning and tagging so many people on these. Ok Folks The Bastard Children Of Booker Noe are Mr. Tyler Giles on vocals with Kaylee Reeder on vocals and guitar. There is also Noah Richmond and Stas Heaney on fiddles.

They opened with “The Last Bottle” and also Miss Kaylee opened with a cover of Holly Williams “Why You Drinkin”…REALLY good vocals on her wow. They have a really good mountain sound and they are working on an album in the near future, now they played a song called “Sympathy”.

I wanted to take a moment out to point out how gorgeous this whole area is and how much FREE parking and places to eat there is, my helper and I couldn’t decide where to eat first to be honest. As the band played “Someone Like You” we talked with many fans that were enjoying the Four Roses Bourbon in the green room. The crowd was very receptive of the song “The Water Liars’ and one of my favorites was “Whiskey Whiskey”.

They closed their set with a song called “Please Cut Me Off” and as my stage was being set up for the next band me and my help snuck over to the The Riot Room to see St.Christopher and his band play. I did not get to see his entire set however I DO have the setlist for you today…because try my best to get to as much as I can.

Christopher opened up with “Right To Die” as he tore apart the outside stage with his band and they played “Sinners And Saints”. I always try my best to get over and cover his set when I can because we don’t always run into each other as often as we want but like he said we are road family.

“A New Kind Of Patriot” was another one that he played I truly enjoyed today as well as my favorite and his most rowdiest song ever “Revolution MotherFer” And the ever popular “We Ride”. He also played “29” as the crowd went wild he played “And The Crowd Goes Wild”.

His last few songs were “Repent And Guilt” “Sledgehammer” and he closed with “Eat/Fuck/Kill”. I tell you what even though I only caught a small portion of his set I still enjoyed what I could of it. And I’m having a GREAT TIME here at Westport Roots Festival.

I also got to slip out and see the Urban Pioneers play Liz’s Reel while Liz Sloan played on the chair like she’s known to do before going back to my stage to introduce my next band Scott Hrabcko And The Rabbits who did a terrific job here tonight on their set. They opened with “Baby You Know Me” and “A Thrill Of My Own” I’m truly amazed at all the talent that was displayed on my stage tonight I’m humbled and honored to have been involved with this festival on this grand of a scale.

They continued their set with “Ogre’s Waltz”and also continued on with a song called “Ordinary Guy”. His new release called ‘Buscuits And Gravity” was one of the albums I picked up tonight from all the shopping I did this weekend. Why not with songs like “Eyes Of Bonnie Blue” and my favorite “Died And Gone To Heaven”.

Every band here on this stage tonight has brought very powerful steel guitars and lead guitar solos tonight and everybody has been fantastic tonight. I’m truly having a wonderful time tonight here in the Westport district of Kansas City, Missouri. And it’s still early people honestly there’s SO MUCH more to be reported on here tonight.

“Lorraine” was one off Biscuits And Gravity that was very nice and “Lost As You” is off the album Gone Places. Another great song he played was “Donnez Moi”. I’ll tell you I’m VERY grateful to have had the opportunity to cover his set here in Kansas City as he closed his set with “Blue, Period”.

Carson Mchone is a native Texan and one fine talented young lady and she has an incredible stage presence, the only regret I have is every time she’s in Nashville I miss her and it kind of stinks but I finally got a chance to catch up with her and introduce her. She has two darn fine albums for sale and I highly suggest you go out and buy them right now.

She opened her set with ‘The Poet Song” and another called “Sweet Magnolia”. You know folks I found out about her last year on Ray Wylie Hubbard’s album “Ruffian’s Misfortune” as she sang backups on “Chick Singer Bad Ass Rocking”. She also did some work for Mike And The Moonpies as “Mockingbird” was one of my top 50 albums of 2015, and she continued with “I Need Drugs” and another called “Sad”.

My favorite song she does is called “Dram Shop Gal” which showcases her unique voice really well. And she went right into a song called “Really Good Friends” and closed her set with.

Dusty Rust was an unexpected surprise because we had a cancellation tonight, so he filled in with a set for us. He opened his set with “Doing Time” and another song called ‘Samantha”.

I’ll tell you what folks there was a truly fine display of steel guitar talent tonight from ALL of the bands that played on our stage so far. This man absolutely commands the stage and was one of my favorite acts of the night. He often does an ongoing program at the Westport Saloon called Spaghetti Western Thursdays with other bands.

“Happy Father’s Day” was another good song and he played one called “City Cowboy’s Throne”. Even though this was a short fast notice set it still was really awesome, and the brisket and smoked ribs…man..I don’t know where they came from but it’s better than anything I have EVER put in my mouth. He closed his set with Merle Haggard’s “Working Man’s Blues”.

I haven’t had the chance to cover J.B Beverley for quite some time now, in fact it’s been a few years ago since we laid eyes on one another! That’s longer than I want to go without seeing an artist but life sometimes is what it is.

He has recently released his old album “Highball” however in my collection his album “Dark Bar And a Jukebox” is one of my favorite older albums I discovered when I began discovering these bands.  In fact later on in his set he did indeed play that song, however the first song was “Interstate Blues”.

I had to run off really quick and as I returned I heard him play “Bottle Is Empty, Ash Tray Is Full” and to be honest I’m not entirely sure that’s the name of it, but I did get the rest of the set for sure. He played “Maggie’s Farm” an old Bob Dylan song which I enjoyed.

His originals after that went back to the Wayward Drifters albums indeed as he played “Drinking Bourbon” and followed that with the Hank Williams Sr. classic “My Bucket’s Got A Hole In It”.  One of my personal favorites he does is “Gonna Ride A Train”, it’s just a fast paced jamming song.

Dusty Rust got up there with him and played “Swinging Doors” before he went into “Dark Bar And A Jukebox” and two more classics “Watch America Roll By” and another good one “Wayward Drifter”. After all this we was hunting for some more food and my help brought back some ribs and some kind of fried taters that were like Heaven in a sack. I got LOTS MORE coming folks, from what I could remember of it all. I was going at it pretty hard at this point to be quite honest and a lot was happening at once, and I have one more part coming with six bands in it.