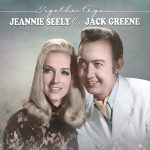 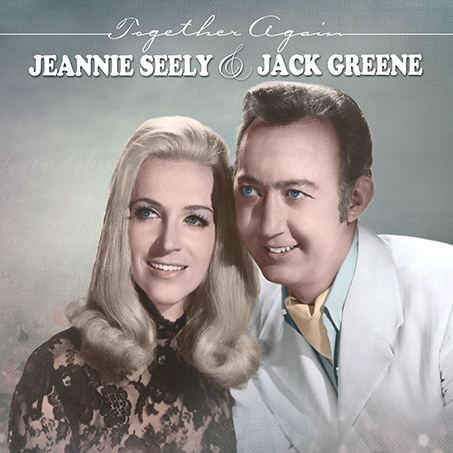 As a HUGE Country Music fan and a collector, one of the largest collections of memorabilia I have is that of Mr. Jack Greene ( including his tenure with Miss Jeannie Seely ).  In fact, I have one of the largest collections of Jack Greene items in the state of Kentucky, and I am told I have one of a kind items that nobody else in the world has I bought from his estate.
Many of the items I acquired before his death he came to see through social media, however he was suffering from dementia, and I’m not totally sure he understood what he was being shown. I have a plethora of pictures and letters of his band the Jolly Greene Giants as well.
The fact that someone out there cares enough to do this makes my heart swell up with joy that I cannot write in words here. Here is the official press release:

NASHVILLE, Tenn. (November 15, 2021) — Jeannie Seely and Jack Greene – Together Again has been released to retail and digital music platforms today by Country Rewind Records, who has established a well-known tradition of bringing unreleased traditional country music into the contemporary country era. This album consists of recordings made exclusively for radio broadcast and, although some song titles may be familiar, these specific recordings have never before been commercially available. The original master tapes were rescued by Country Rewind’s president and executive producer Tom Gramuglia and put in the safe hands of producer Paul Martin who brought the recordings up to twenty-first century audio quality. Mastering  was provided by engineer Mick Conley with overdubs, remix, additional guitars, bass, drums and keys by Paul Martin. Background vocals for the project were sung by Nora Lee Allen, Jamie Allen Martin and Paul Martin. Stream and download Jeannie Seely and Jack Greene – Together Again on Spotify, Amazon Music, YouTube Music, Apple Music, Pandora and your favorite digital music platforms here.

“I was thrilled that these recordings were still in existence and that they would be available to the public once again,” said an excited Jeannie Seely when she heard that these long-forgotten tapes had been re-discovered. “I was so thrilled to hear I would be working with Paul Martin on this project, ” Paul Martin is not only one of the nicest guys you could ever know, but he is absolutely brilliant musically. I knew this would be fine-tuned to be the best it could possibly be, and he didn’t disappoint. I’m also proud to call him and his family close personal friends.”

Seely added, “It will always be special to remember the years Jack and I worked together with an incredible group of musicians,” she said. “We were both excited to carry on the traditions of country music, but also to update our sound and presentation to expand the limits as far as we could. The friendships we formed with each other, and our fans, are treasures. These recordings brought back wonderful memories of that very busy time in my career,” added Seely. “This also reminded me that we really did have a great sound and a great show, as these are the arrangements that we used in our live stage shows.”

“It was an honor to work on this particular project,” said Martin. “Jeannie and Jack have always been two of my musical heroes. I am grateful that I have gotten to know them through the years. Growing up working with my parents’ country band in the 70s, I performed many of the songs you will hear on this project with my folks back then. These songs seem so familiar, but they also show just why these two artists are true legends. It always takes a great song, but combined with 2 great singers, you get a timeless piece of art.”

Country Rewind Records has dedicated itself to bring classic country with this contemporary feel to not only the past country fans but also to the new country listeners.

About Country Rewind Records:
Country Rewind Records (CRR) was founded by Thomas Gramuglia of Hindsight Records in 2014, Gramuglia obtained a treasure chest of unreleased recordings from recruitment radio shows from the ‘60s and ‘70s. The superb CRR collection of original master recordings contains music from more than 100 country music legends and trendsetters (including intimate performances by country music greats such as Loretta Lynn, George Jones, Connie Smith, Faron Young, Dolly Parton, Conway Twitty and many more). These recordings were never released for commercial use. After a diligent quest to collect appropriate and legal permissions from artists and/or their estates, CRR has now recorded and produced multiple, quintessential, “must-hear” projects. With the mission to transfer these never-heard-before tracks to a high quality, state-of-the-art recording; complemented by contemporary instrumentation and background vocals, Country Rewind Records will release this historical American music to America’s music generations of the future. For more information, visit countryrewindrecords.com