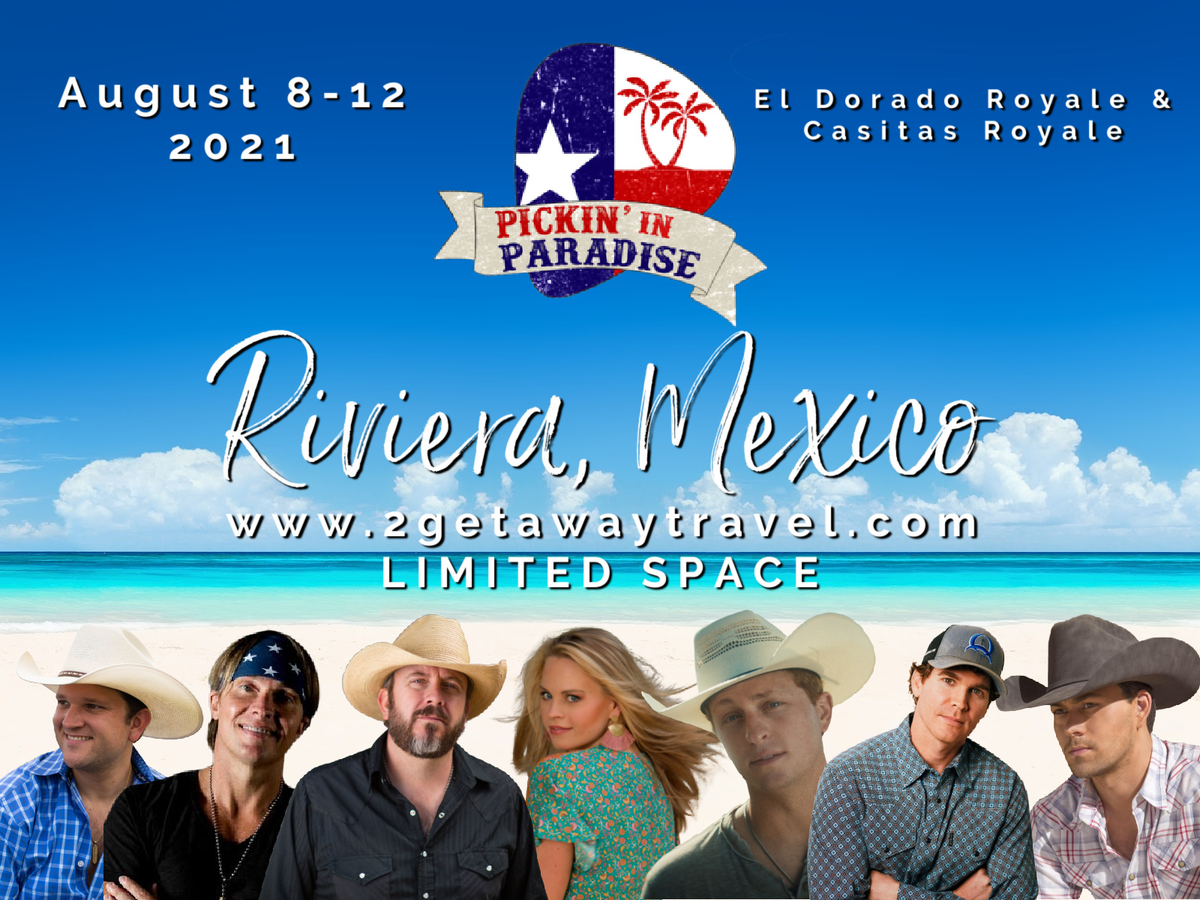 Nashville, TN (April 30, 2021)-In a time when people more than ever want to get away and forget about the daily grind and most especially, the anxiety of 2020, a tropical getaway marinated in a stout and seasoned country music broth tops the list.

Pickin In Paradise offers 5 relaxing days (August 8th through August 12th) to unwind and laze about at the El Dorado Royale Resort and in Riviera Maya, Mexico just outside of Cancun. This all inclusive retreat will most definitely put the bounce back in your step featuring musical performances from William Michael Morgan, Glen Templeton, Brandon Rhyder, Curtis Grimes, David Adam Byrnes, Brian Callihan and Holly Tucker. Space is limited so lock in your spot now.
For details visit https://www.2getawaytravel.com/pickininparadise2021

All packages include: all-inclusive hotel accommodations, 24 hour room service, shared round-trip transfers, all music events and souvenir t-shirts and taxes, plus a 5% service fee due at time of booking. Pre/post nights and family packages are available at an extra charge. Request “Customize My Trip” when you would like to add airfare or add extra nights, and we will quote for you. NOTE – Texas meets Mexico dinner is only for first 100 people reserved.

Lose yourself in the bliss of a paradise only found on the shores of the Riviera Maya. El Dorado Royale is a Five Star beachfront resort, providing an exclusively breathtaking setting. With the unparalleled Gourmet Inclusive® Experience, guests can indulge in the ultimate foodie experience, lavish accommodations, pristine amenities, exciting activities, and scenery only imaginable from a postcard. Savor every moment of the Gourmet Inclusive® Experience in any of El Dorado Royale’s elegant à la carte restaurants. Every meal is a demonstration of our chefs’ mastery of the culinary arts. It comes to no surprise that this adults-only haven of luxury is showered with covetable awards, from the 2017 Best Hotels in Mexico by U.S. News & World Report, to the AAA Four Diamond award.

For over a decade, singer-songwriter and musician Brandon Rhyder has been living the high life as one of the most celebrated music artists to come out of Texas. Widely exalted for his exquisite ability to couple gorgeous melodies with superb storytelling and deeply admired for his signature songbird vocal style, Rhyder is an artist’s artist. His resume boasts 18 years of highly praised albums, a rigorous tour schedule of 175 plus dates a year and the privilege of working with top-notch songwriters like Liz Rhodes, Keith Gattis, Lori McKenna and Radney Foster to name a few. Born and raised in Carthage, Texas, Rhyder grew up singing in church, where his voice, even then, stood out. In college he discovered the guitar and began writing songs.

Like many young talents that move to Nashville seeking stardom as a country music artist only to find themselves roped in and caught up in the songwriters  legion of Music City, Brian Callihan’s story is a familiar one, but (pun intended) he is still very much writing it.  He left his little hometown in rural southern Georgia with ambitious designs on Nashville and spent years on a tight rope in a balancing act between his need for the stage and the demands of a published songwriter. As a kid he was able to do this with greater ease because a tough childhood and the lack of contentment at home made plenty of room for the pursuit of escapism…and that’s what music was for him.  He was already well into writing songs at the age of 12, and by the time he was 16, Callihan was a local hotshot playing 2-hour sets in bars, venues and at house parties.

With over 35 million Streams on Spotify, ELEVEN #1 singles on the Texas Country Music Chart and a #1 song on the national Power Source Christian Country Music Chart, Curtis Grimes is proving to be a force in the country music scene that can’t be denied.

To hear Grimes sing is to take a trip through the heart of country music. As a Texas native, he was raised on a steady diet of Alan Jackson and George Strait. He possesses the everyman charm of both influences along with a refreshingly mature voice that truly stands out. After a childhood filled with playing baseball and eventually earning a Division I scholarship, Grimes was given the opportunity to appear on the hit reality TV show “The Voice” in 2011. Under direction of coach CeeLo Green, he ended up finishing as a coveted Top 10 finalist of Season 1.

He left his home in central Arkansas in 2008 at the age of 19 years old and ambitiously moved to Nashville, TN in an attempt to, like millions of folks before him, deliver his brand of country music to the great Music City, and secure a budding career as a music artist. Within his first year he signed a publishing deal/record deal with Better Angels, a company that would later represent hit songwriters like Thompson Square, Josh Thompson, Ward Davis and Matt Rogers.  His first taste of success came with the release of his single “Sweet Distraction” that hit #62 on Billboard and Top 20 on Music Row, which was the highest debut from a new act that year.  He became a quick study in the art of songwriting, a talent he previously undervalued having starry eyes only for the stage. When you are a young kid sitting in a room with the picks of the litter among the songwriter society, the sheer enormity of the opportunity is a sobering affair.

“I’m not sure I chose country music, in a way it kind of chose me” claims blue-collared hero Glen Templeton, who is living proof that fate favors the fearless. Glen Templeton’s legacy began to unfold when he was hand-picked by the daughters of country music legend Conway Twitty to portray their father in the touring musical tribute to the late icon. Glen’s star-studded debut launched the beginning of an epic journey, catapulting him into the public eye with appearances on CMT, The Grand Ole Opry, The Ryman and more. Sharing stages with the likes of Loretta Lynn, George Jones, Montgomery Gentry, LoCash and countless others, Glen Templeton has amassed an immeasurable number of faithful fans and followers, contributing to millions of streams on Spotify, Apple Music and YouTube, while simultaneously securing #1 spots on the radio charts, including Sirius XM, with good-time anthems like Ball Cap. Fueled by uncompromising tenacity and raw talent, Glen Templeton is touring non-stop, gearing up to release his best material yet.

Holly Tucker, who has been called the Angel of Texas Country Music, is tenaciously proving that great things are worth the wait.

After winning the hearts of millions of television viewers in 2013 on Season 4 of NBC’s hit music reality show, The Voice, Holly is leaving her boot print all over Texas Country Music and with fans worldwide.

Her voice has been described by Coach Blake as “the most effortless, accurate, and powerful voice he’s ever heard”, and is currently Texas Country Music Association’s reigning Female Vocalist of the Year, three years running.

In 2017, she also earned awards from the ETX Music Office for:

William Michael Morgan has only just arrived in his mid twenties, but with a love of country music deeper than The Big River itself, the Mississippi native is the very definition of an old soul. His pristine Southern vocal, timeless sound and honest lyric represents a new generation of hit makers in Music City; a modern day descendant of artists like Randy Travis, Alan Jackson and George Strait.

After signing his major label deal at the tender age of 19, Morgan began by hitting the top of the radio charts, landing at No. 1 on Mediabase with the Gold certified “I Met a Girl…” He then released an acclaimed EP and earned a Billboard Top 5 with his 2016 album debut, “Vinyl”. He has performed more than 50 times on the Grand Ole Opry and was featured by the Country Music Hall of Fame and Museum as a highlighted artist in the 2017 American Currents exhibit.

But now that he’s a few years older and few hundred shows wiser, this old soul is looking toward a new horizon.