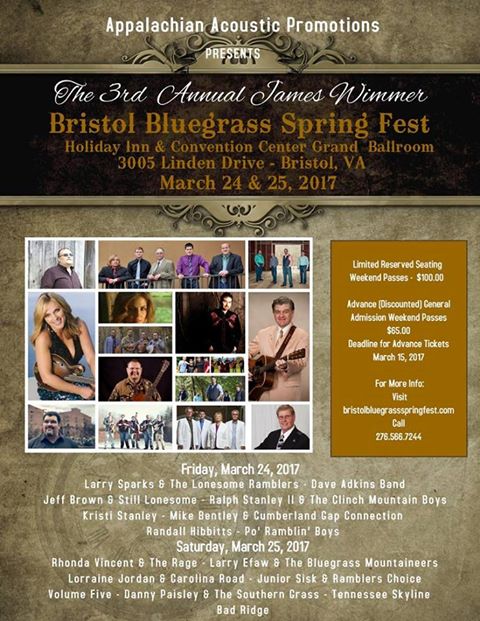 This spring is already in full swing all over the United States with some terrific Bluegrass,Roots Music and Red Dirt festivals going on all over. I have been involved and reporting on all of them from this website, exactly 175 of them in 2017, how’s that for music journalism?

Out there is East Tennessee and Virginia lies Bristol a region known for It’s plethora of Bluegrass bands, It’s pretty much the mecca of Bluegrass Music..it was born there. Mr. Jeff Brown and Mr. Randall Hibbitts are both Bluegrass Legends in their own right and have created and organized a sellout festival every year.

Now this video is from two years ago but it brings a great insight into the festival which is the same days as the last few years.
You can click on this LINK HERE and it will direct you to the local area hotels that are offering a festival discount.

This is Junior Sisk from 2015 who is also on the festival lineup for 2017, I rpomise you this is one of the premiere Bluegrass festivals around for Spring!
As far as time schedule right now this festival has not posted anything like that and I will post anything they announce.