A Great American Tapestry The Many Strands Of Mountain Music. 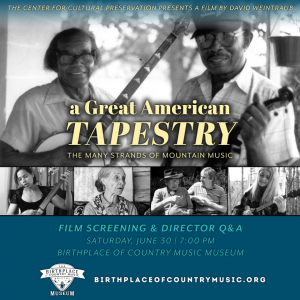 The Birthplace Of Country Music Museum in Bristol Virginia, is a hallowed ground for someone like me. Someone who just absolutely thrives and salivates over the oldest of old time traditions. In my opinion for music and life in general it is the elderly that are it’s greatest asset. I’m going to include their mission in this article as well as information on a terrific presentation I think would benefit all of you to see.

Mountain music was commonplace in America for decades longer than one can imagine, and it shaped Bluegrass and then modern Country Music before Superstar Legends such as Uncle Dave Macon and Hank Williams ever thought of performing. Many will tell you that the Carter Family was the first family of Country Music, but I digress and argue that the Stoneman Family was in my opinion.

Whomever YOU DEEM as correct I bet there were many mountain families already coming down from hills and hollers performing Ozark and Appalachia laced ballads of murder and moonshine. I can tell you from experience and seeing it for myself that is the case.

Black culture in the mountain music world was WIDELY overlooked, but this presentation embraces it fully and gives it the credit it deserves. I wonder how many wonderful performers were undiscovered and unknown in the 20’s and 30’s besides DeFord Bailey? I think NOW we shall soon see here in this movie.

WHAT COMPRISES the Birthplace of Country Music

The Birthplace of Country Music is a 501(c)(3) nonprofit organization that seeks to perpetuate, promote, and celebrate Bristol’s rich musical heritage; to educate and engage audiences worldwide regarding the history, impact and legacy of the 1927 Bristol Sessions from which we derive our name; and to create recognition, opportunities, and economic benefit for our local and regional communities.

BCM accomplishes this mission through its three primary branches (Museum, Festival, and Radio), special projects and events, and a multitude of community and educational outreach programs. A brief description of the three primary entities follows:

Birthplace of Country Music Museum – The Museum, an affiliate of the Smithsonian Institution, opened on August 1, 2014. The Museum is 24,000 sq. ft. on two levels. In addition to core exhibits the Museum also houses a large space for special exhibits, a performance theater, the radio station, a learning center and The Museum Store. The Core Exhibits are highly interactive and feature a number of video experiences as well as various artifacts relating to the 1927 Bristol Sessions and other aspects of Bristol’s musical legacy. The Museum has received numerous awards including the highest awards in its state organizations, and has been recognized for Leadership in History by the American Association of State and Local History.

Bristol Rhythm & Roots Reunion – The annual music Festival began in 2001 and has been a part of BCM since December, 2012. A 2015 Economic Impact Study showed that visitors to the Festival from outside the region had a $16.1 million impact on the region. The Festival generally hosts over 130 bands on 20 stages in downtown Bristol during the third weekend in September. Attendance has grown to approximately 45,000. Among its many accolades the Festival has been named as one of Rolling Stone’s “Top 20 Tours and Festivals”, and has won a Grand Pinnacle Award from the International Festival and Events Association.

Radio Bristol – The station went live broadcasting from the Museum on August 27, 2015. Radio Bristol features a low power FM channel, three channels streaming different but related genres of music, and one channel streaming video. Streaming stations can be accessed online or using the Radio Bristol App on mobile devices. Radio Bristol is garnering attention from radio, cultural, and business organizations for its unique and innovative approach to history, music, and media. The station has listeners throughout the United States and in more than 140 countries.

Independently, each of these branches strives for excellence in bringing the arts to wide audiences. Together, the entities interact synergistically through collaboration, mutual support, and the ability to bring innovative thinking to important arts programming. The result is fulfillment of the BCM Mission and progress toward its Vision.

The Birthplace of Country Music seeks to perpetuate, promote, and celebrate Bristol’s rich musical heritage; to educate and engage audiences worldwide regarding the history, impact and legacy of the 1927 Bristol Sessions from which we derive our name; and to create recognition, opportunities, and economic benefit for our local and regional communities.

The Museum, Festival and Radio entities that comprise the Birthplace of Country Music organization are all successful, respected, popular, and acclaimed, and are having a significantly positive impact on Bristol and its surrounding region – both economically and in creating recognition of Bristol’s place in the history of music.

In the summer of 1927, just two months after Charles Lindbergh made the first flight across the Atlantic in the Spirit of St. Louis, and during the season that Babe Ruth was blasting out 60 home runs for the Yankees, record producer Ralph Peer of the Victor Talking Machine Company was making music history in Bristol TN/VA.  Between July 25 and August 5 of that year, Peer conducted recording sessions using the new Western Electric electronic microphone during which 19 performers (or groups of performers) recorded 76 songs.  Those sessions – the now famous “Bristol Sessions” – are known as the “Big Bang” of modern country music, and were called by Johnny Cash “The most important event in the history of country music.”

The 1927 Bristol Sessions featured the first recordings of both Jimmie Rodgers, and the Carter Family.  Jimmy Rodgers is now referred to as the “Father of Country Music” and was the first person inducted into the Country Music Hall of Fame.  The Carter Family, featuring A.P., Sara, and Maybelle Carter, is now known as “The First Family of Country Music” and are also in the Hall of Fame.  The 1927 Bristol Sessions not only initiated the careers of these superstar performers, but initiated the broad commercialization of country music.  Many of the songs and stylings of those sessions still resonate and influence the music of today.  For these reasons, in 1998 the United States Congress officially designated Bristol TN/VA as the “Birthplace of Country Music.”

The Birthplace of Country Music Museum presents a film screening and Q&A session with director David Weintraub of A Great American Tapestry: The Many Strands of Mountain Music.

Location: Performance Theater at the Birthplace of Country Music Museum

The Center for Cultural Preservation presents a film by David Weintraub: A Great American Tapestry: The Many Strands of Mountain Music.

A Great American Tapestry tells the story of the Southern mountains’ musical birth and evolution through the strands of the Scots-Irish legacy, oft-overlooked African-American tradition, and through the longest lived music in the Americas—the indigenous tradition.