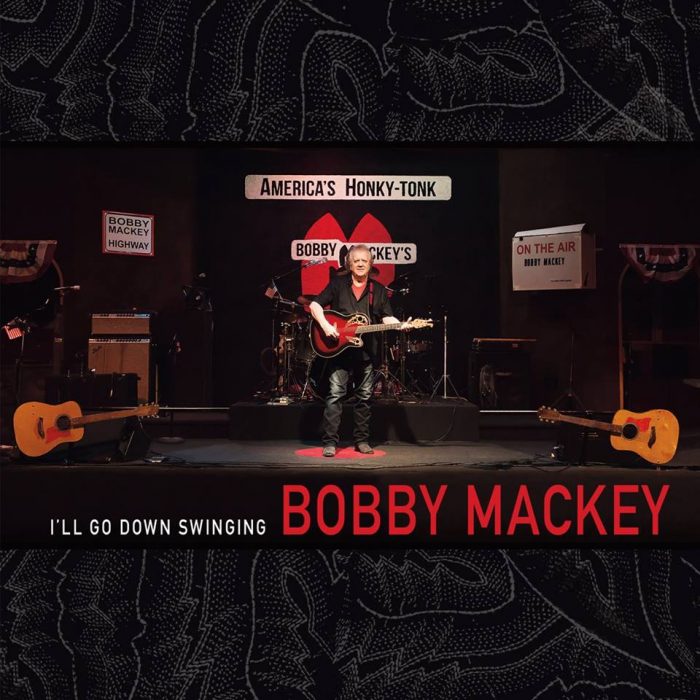 You might be familiar with Bobby Mackey as the owner of Bobby Mackey’s Music World in Wilder, KY which is listed as one of America’s most haunted locations and has been featured on shows such as Ghost Adventures.  Aside from owning one of the afterlife’s biggest night clubs, Mackey makes some great country music himself. If you’re familiar with the Ghost Adventures episodes which featured his establishment, you might also know that his biggest hit was a haunting tune called “Johanna” which was featured on an album by the same name.  Mackey is back with his latest release titled I’ll Go Down Swinging which is a follow-up to 2013’s Country Music Lives On. This new record continues Mackey’s tradition of making straight forward classic sounding country records. Let’s dig a bit deeper into this one.

The album kicks off with a rocking tune called “I’ll Go Down Swinging” that puts you right back into the days of the country music outlaws and sounds like it would have fit with the best of Waylon or Merle any day.  I love the honky tonk piano throughout this track. Another favorite is “What They Call Country”. This song takes current country radio to task for not playing real country music anymore claiming that current “country” singers stole the name of country music.  It’s a song that longs for the days of classic country music.

Continuing on with the theme of longing for classic country music is the tune “ The Great Haggard Songs”.  Bobby Mackey takes the style of a slower Merle Haggard tune to reminisce on his passing and the music he left us.  It’s a another great tribute in the line of great Haggard tribute songs. Finally, “The Barnyard Song” is a fun love song that uses barnyard animals for a play on words.  I love the moment where the song even breaks the fourth wall. You get a sense that the song is very aware of itself and how cheesy it is.

Bobby Mackey proves that classic country music is not dead with this release I’ll Go Down Swinging.  He makes some good traditional country music while at the same time reminiscing on days past. This album is available everywhere digitally and CDs are available at Bobby Mackey’s Music World.