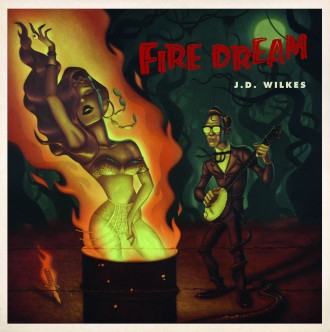 You never know what you can expect from a new project by J.D. Wilkes.  While he has released a couple of old time banjo records under his own name, Fire Dream is the first true debut solo record from Mr. Wilkes.  It has a different sound than what you have come to expect from The Dirt Daubers or The Legendary Shack Shakers.  Fire Dream brings all of the southern Gothic elements of Americana to the forefront and mixes it in with a variety of sounds from fiddle driven hoe-downs to southern Gothic blues.

The opening title track sets the tone perfectly with a dreamlike soundscape that brings about images of devils dancing around a fire to the song.  The same dreamy effect can be heard in the first single from the album “Walk Between The Raindrops” with it’s haunting fiddle that plays throughout.  These’s tracks heavily feature the gothic overtones that are present throughout the album.

I love that J.D. Wilkes has chosen to re imagine two songs from his old projects here.  He has taken “Hoboes Are My Heroes” from The Legendary Shack Shakers and “Down In The Hidey Hole” from his album with The Dirt Daubers titled Wild Moon.  He has reworked these songs to fit the style of this new project and they work well.  This new version of “Hoboes Are My Heroes” might be my favorite version of the song.  It’s a slowed down Gothic blues romp that works for the track.

I love that J.D. Wilkes never seems to do the same thing twice.  Every band he has been in has had a different sound from The Dirt Daubers to the Shack Shakers to this solo record.  I always look forward to what J.D. Wilkes brings to the table on an album because he celebrates southern sounds, but works with them in ways that moves them forward.  Be sure to check this out if you’re a fan of anything J.D. Wilkes does or a fan of Americana music with a southern gothic flair.  Fire Dream is available everywhere on February 16th, 2018.