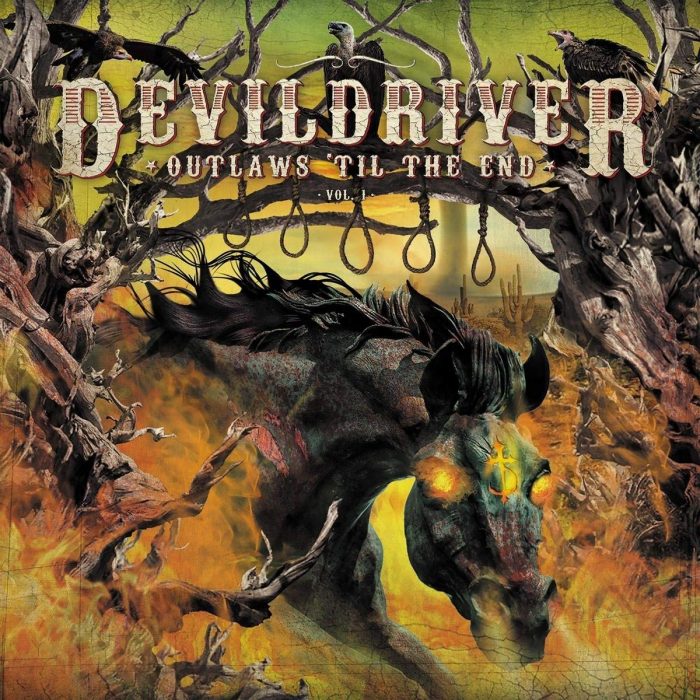 When I first heard Devildriver was producing a country covers album, I was intrigued.  I’m all for the mixing of these genres because the current fan base has so much crossover potential.  These kind of projects also tend to force a band like Devildriver to come out of their comfort zone and record in a style they might not typically be used to.  I have fond memories of the Buck Satan and the 666 Shooters album Bikers Welcome Ladies Drink Free. That album found Ministry’s Al Jourgensen doing country tunes close to the style of Hank 3.  Devildriver take a different approach on this record and do some classic outlaw country tunes 100% in their style. This can deliver some mixed results but in some cases, it does work, especially if you are a fan of both genres.

One of the most notable inclusions here is a cover of Hank 3’s Country Heroes.  The track features the return of Shelton himself contributing vocals in his more metal and snarly voice.  It’s an awesome track to kick off the album with and lets you know what you’re in for from the start. Another cover that kind of works is “Whiskey River” which features Randy Blythe and Mark Morton of Lamb of God.  It can be odd to hear these songs with typical metal screaming vocals, but once you get into the track, it works in an odd way.

The first track beyond “Country Heroes” where everything really clicks is “Ghost Riders In The Sky”.  You might have heard bands like The Outlaws doing a heavier version of this tune already, but Dez Fafara and company take it up a notch.  The song is instantly recognizable even through the growling vocals, and Jon Carter and Ana Cristina Cash’s clean vocals bring something different to the table.  “Copperhead Road” is another track where everything seems to just work in the arrangement. It is instantly recognizable as a metal version of the song and will likely be the tune to crossover and win over country leaning fans.  Finally, I really dig the version of “The Ride” here. Dez Fafara trades vocal lines back and forth with Lee Ving of Fear and the mix of growling vocals and clean vocals works to create a different and awesome take on the David Allan Coe classic.

There are some instances where the band fails to capture the feel of the original country version.  Takes on “If Drinking Don’t Kill Me (Her Memory Will)” and “I’m The Only Hell (Mama Ever Raised)” fall flat and are the most unrecognizable from the originals.  The album as a whole is a mixed bag. It’s an interesting project for a band like this to take on, and while it is sure to polarize their fanbase and the outlaw country fanbase, it is clear that Devildriver have a passion for these songs and create their metal versions with full respect of the source material.   These kinds of projects are always a case of some arrangements being awesome and some falling flat. It is the nature of the beast. Devildriver’s Outlaws ‘til the End: Vol. 1 is out everywhere today.