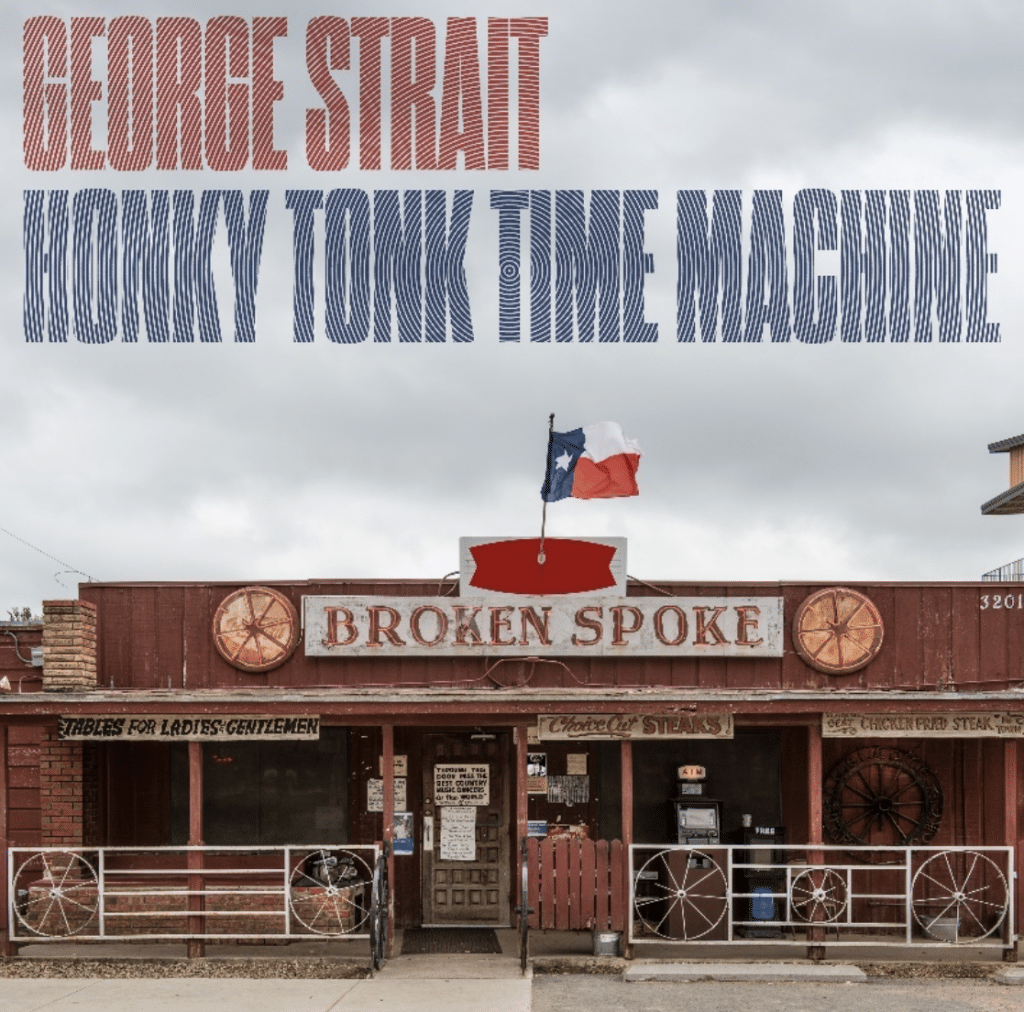 George Strait has released his 30th studio album in Honky Tonk Time Machine on MCA Nashville.  In my opinion, this is the best of his current run of records and his best overall album since Twang.  There are some misses here, but as a whole, it’s worth checking out.  Let’s take a dive into some of these tracks.

The album kicks off with a great honky tonk number called “Every Little Honky Tonk Bar”.  I have a feeling this will be a stable in George’s live sets while on tour for this album.  It’s a great little honky tonk number about living the bar life, and then trying to live the work life on Monday “Monday morning, it’s a given / I’ll be D-R-A-G-N, draggin'”.  It’s a fun tune worth checking out even if you don’t get the album.  I’m also a big fan of the Jim Lauderdale and Odie Blackmon written “Two More Wishes”.  This is one of only two of the original tunes on this album that don’t feature George Strait or his son Bubba Strait on the writing credits.  Jim Lauderdale always writes good stuff, same with Odie Blackmon so you can see why George put this on the album.

Another favorite track on this album for me is the current single George Strait has out there called “God And Country Music”.  I love the sentiment put forward with this song and while it might be made for country radio, it’s a good tune.  I have to give credit here to Lori McKenna who is a recognizable name in the writing credits of this track which also features credits from  Luke Laird and Barry Dean.  Another slower track is “The Weight Of The Badge” dedicated to law enforcement officers everywhere.  There is a long line of good country songs about law enforcement officers of all stripes and this is another one.  It’s sentimental and the lyrics resonate with a lot of the good stories you hear about police officers today.  Another favorite is the title track “Honky Tonk Time Machine”.  It’s another barn burner in the spirit of the opening cut but I love the guitar riffs on this one from both the electric and the pedal steel.  It takes you back to the days of old in the classic honky tonks.  Finally, I really dig “Sing One With Willie” with Willie Nelson.  It’s kind of a tongue in cheek number about how George has never done a song with Willie and how he regrets it.  When Willie comes in on the last verse, it makes for a great moment on the album with what could have otherwise been a throwaway collaboration.

Honky Tonk Time Machine is a great effort for George’s 30th studio album.  It doesn’t stand up to some of his greatest records, but nothing he’s put out in the last ten years has.  That being said, this is his best record in at least the last decade so if you have tuned out, it’s time to come back and give the king of modern country music another shot.  Sure, tracks like “Codigo” are kind of a throwaway, but there are some gems here worth seeking out.  Honky Tonk Time Machine is available everywhere you can get good music as of Friday March 29th, 2019.  Gary Hayes Country will also have full coverage of the show George Strait performed at Mercedes Benz Stadium on March 30th, 2019 coming very soon.

Favorite Tracks : Every Little Honky Tonk Bar, Two More Wishes, God And Country Music, Take Me Away, The Weight Of The Badge, Honky Tonk Time Machine, Sing One With Willie