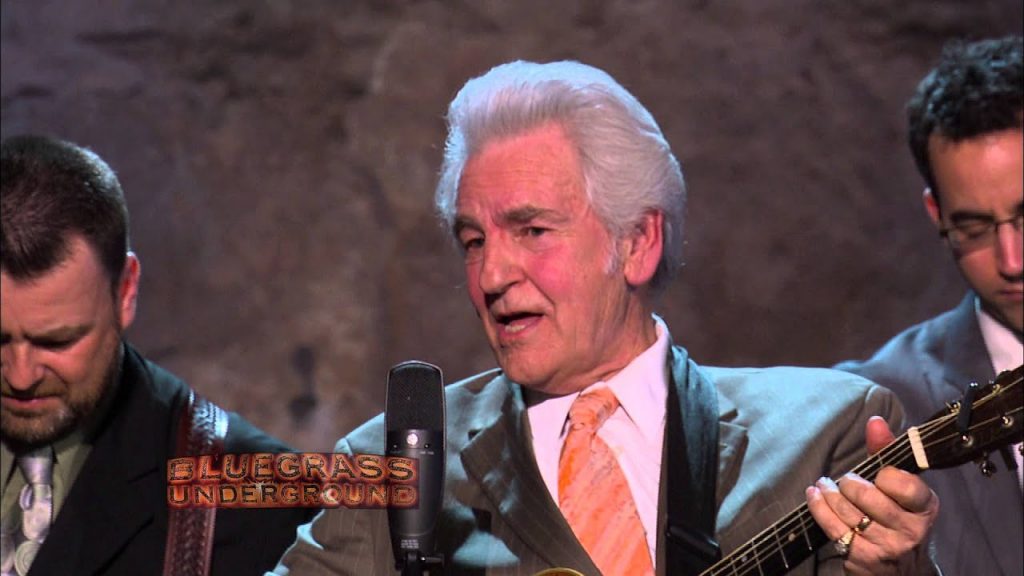 I have been around the country to see The Del McCoury band and the Traveling McCourys in all types of environments. One on my bucket list is getting up to Maryland in May for the annual DelFest, his holy Grail of festival greatness. I have many great friends that annually attend that event, and enjoy my articles, that I have never had the pleasure to shake hands with as of yet. I fully intend to soon rectify that bucket list check off.

This past year has been a very special one for Mr. Del McCoury and his family , as he celebrated his birthday by taking over the Grand Ole Opry naming it the Grand DEL Opry. That night he simultaneously honored his membership of the hallowed institute while they honored him.  We had a nice article up for that HERE.

The Traveling McCourys won a Grammy for best Bluegrass album of the year, and I got to finally see them perform at 3rd And Lindsley this past year, where they brought forth MANY surprise guests for jams. It’s always an absolute treat to go see people like Mr. Billy Strings and Mr. Sam Bush.

My other website contributor Mr. Joshua Wallace joined me last weekend for a GREAT weekend of music which began Friday night at the Terminal West. The iconic venue hosted a GREAT SHOW last week, which placed the band at a reasonably early time slot, and the show ended at an equally reasonable time. The venue offers pre show food options in an adjacent restaurant area, however we didn’t eat there as time was short for me running into traffic in every city I rolled through. The hotel I used this time was Comfort Inn Sandy Springs Perimeter, and was an overall nice hotel. The staff was friendly and the accommodations were VERY NICE, including a decent breakfast bar.

The very first song they opened their set with began with Mr. Jason Carter’s Ashland Kentucky fiddle, and it was from the Snapshot album, By Request album and many more. “Bluest Man In Town” was first, which is a slow and sad song of lost love, and creeping shadows during the night. “Travelin’ Teardrop Blues” was the other first song here tonight, which featured some mighty fine banjo work from the younger McCoury boy. The entire band then went into one of their instrumental breakdowns, that feature some powerful turns on leads.

Nashville Cats was next, one of my personal favorite songs he does. The very first time I got to hear that one lve was when he played Muddy Roots in 2015. He played on the wood stage that year, and tore the festival apart in everyway. But man I’ll say this, they sure sound perfect tonight here in Atlanta. “Deeper Shade Of Blue” was part of their set tonight,  as well as another instrumental they called “Backup And Push”.

“I’ll Break Out Again Tonight” features Mr. Alan Bartram on vocals, and is a great classic prison break song. Also, “That O’l Train” was next, I mean we have murder, jail, trains and moonshine…can you ask for more out a Bluegrass show?  I will always hold a special place in my heart for one of Bluegrass last TRUE living Legends.

“I Need More Time” was one of the crowd requests tonight, with an extensive as a catalogue as Mr. Del McCoury has you would think it was impending doom for him to accept songs hollered out by just anybody. He played EVERY SONG the audience called out, like the “Asheville Turnaround” , and of course one of Mr. Joshua’s favorites “Hot Wired”.

Another great prison song tonight was his classic song “Black Jack County Chains”, about the old fashioned chain gangs. He told a really funny story about a man loosing a watch. The lost and found lady’s name was Helen Hunt, and the punchline was Well If You Want Your Watch Back Go To Helen Hunt For It. It was really funny the way he presents jokes with his “Aw Shucks” demeanor, and innocent sense of humor.

‘Get Down On Your Knees And Pray” was one off his 2007 album called “Family”, which also featured “Nashville Cats”. His new 2018 album called “Del Mccoury Still Sings Bluegrass” boasted one of his closing songs called “To Make Love Sweeter For You”. Now, of course the piano was missing from this rendition of that song, but it still sounded GREAT.  He closed with a few more songs before leaving and coming back for an encore, which of course was “1952 Vincent Black Lightning”.

The wonderful staff at the Terminal West, and the AWESOME sound there in that room made this show VERY enjoyable in every way. I wanted to hear “Moneyland” , however it’s OK to not hear everything he could play. He is one of the many that could play for hOURS and STILL not touch upon EVERY good song he has!