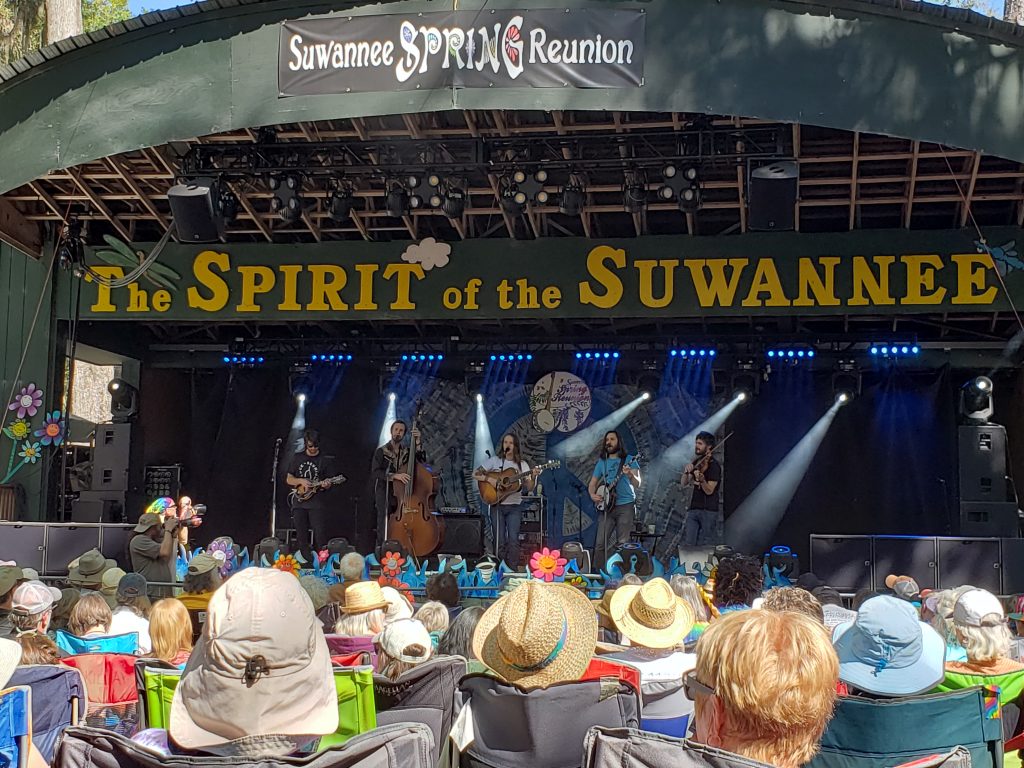 This year I had the pleasure of attending Friday and Saturday night of the Suwannee Spring Reunion Festival. This festival actually ran March 21st – 24th, 2019 which is Thursday through Sunday so I did not get to go to the entire festival, but I still had an amazing time with all that I saw. This was actually my first experience at the Spirit of the Suwannee Music Park with a festival. I live within 45 minutes of the park but I have only had the chance to visit them around Christmas time for their amazing drive through Christmas lights display. This year I was able to correct that error and I had an amazing couple of days at the Suwannee Spring Reunion.

I arrived Friday afternoon and took a minute to get my bearings. The site for the festival is huge and sports a total of 4 music stages plus a 5th stage that is mostly various workshops. The two main stages are the Amphitheater Stage and the Porch Stage which alternate all day long. There is a Florida Stage, which is a tent stage in a nearby field, and a Music Hall where you can enjoy various acts in an in-door setting. The workshop stage is called the Music Farmer Stage. I focused most of my time between the two main stages and the music hall. This festival is scheduled so that bands have 2 or more sets throughout the weekend so if you miss one set, you’ll be able to catch another later on. The only band that did not repeat was Marty Stuart and he had the Saturday night headlining slot.

When I arrived, the first band I saw was Town Mountain. They were playing on the Amphitheater stage and I arrived in time to catch some of my favorites from them. They did “Down Low” and “New Freedom Blues” from their new record, but also took the time to do some of their older tunes like “Law Dog”. The band’s second set on Saturday afternoon at the Porch stage saw them going deeper through their catalog. I was really impressed with this band live and hope to see more of them in the future.

Next, I went into the Music Hall area and caught a bit of Shawn Camp and his band. I was not familiar with much of his music before seeing him but I enjoyed what I saw. He played songs I knew like “Bad News” which is covered by Whitey Morgan and “I”m Dying For Someone To Live For” which he co-wrote with Loretta Lynn for her 2018 album Wouldn’t It Be Great. I did not get to spend much time with this show, however I enjoyed what I heard and look forward to hearing more in the future.

The next band I saw on the main stage was Steep Canyon Rangers. I was looking forward to seeing this band live as I had never seen them before, but I have been a fan of theirs since they first recorded with Steve Martin back in 2011. Between their two Amphitheater Stage sets, one on Friday and one on Saturday, the Steep Canyon Rangers hit most of the songs you would want to hear from them. One of the highlights for me was an extended version of “Radio” which changed mid song into a full version of Tom Petty’s “Running Down The Dream”. They also hit deeper songs such as “Tell The Ones I Love” and “Out In The Open”. That track actually featured a nice long harmonica solo from Graham Sharp. As I said, this was my first time seeing this band and I’m looking forward to seeing more. Their form of bluegrass is a bit more rocking than other groups, and I dig it. It fits well into the longer jams often heard at the Suwannee festivals.

Steep Canyon Rangers on one mic

The Grass Is Dead

Speaking of longer jams, I went over to the Music Hall to catch some of The Grass Is Dead. This band takes songs from the 70’s rock band Grateful Dead and does their long jams in bluegrass style. Jerry Garcia played in some bluegrass bands during his time, and that influence sometimes crept into his music with the Dead so a bluegrass tribute band to the Dead is not a stretch by any means. While I am a fan of the Grateful Dead, I’m not familiar enough with their catalog as a whole to go through everything the band played. I do remember “Alabama Getaway” and “Samson And Delilah” during this set. Another highlight was that this set got a lot of people dancing and moving their feet which is always nice to see at these festivals.

People Dancing with The Grass Is Dead

After The Grass Is Dead, I finally sat down at the Amphitheater Stage for one of the highlights of the festival. I have always heard about Billy Strings and how amazing of a guitar picker he is and seeing him live certainly blew me away. He played a good hour and a half long set on Friday night and a slightly shorter set on Saturday. Both sets had some nice extended jams which highlighted his guitar picking and the talents of his band as a whole. A highlight on Friday night was an extended “Meet Me At The Creek” which went for almost 15 minutes. Then on Saturday he stretched “Dust In A Baggie” out to almost 11 minutes. There were plenty of other long jams during his set and the crowd loved his style of blazing fast flat-picking. I will most certainly be seeing Billy Strings more often in the future as these two sets made a lifelong fan out of me.

Saturday, I saw two country music legends on stage. First up was Jim Lauderdale and his band. I have been a fan of Jim for a while and this was the first time I was able to see him live. Some highlights for me of this set included a Odie Blackmon Co-write “Two More Wishes”. This song actually appears on the new George Strait album and Jim stayed close to what is performed on that record. I also enjoyed hearing the track “Wild On Me Fast” from his latest record Time Flies. Finally, he also did the title cut of the Wait ‘Til Spring album he did with Donna The Buffalo who also perform at this festival regularly.

Marty Stuart and The Fabulous Superlatives

The finale of the Suwannee Spring Reunion Festival for me was Marty Stuart. I’m a huge fan of Marty and his show with The Fabulous Superlatives is one of the best country shows you can see. Marty was in good spirits for this fest as he praised the Suwannee and Florida throughout. I loved hearing “Tear The Woodpile Down” from his Nashville, Vol. 1 album. He also got to more recent tunes from his Way Out West cd like “Time Don’t Wait” and “Whole Lotta Highway”. He also mentioned that his 1999 album The Pilgrim would see an extended release this year and played a song that was meant for that album but he couldn’t finish until recently. I can’t wait to hear the expanded edition of this album. He surprised the crowd with a great rendition of “Bonanza” and did an amazing solo “Orange Blossom Special”. I love that song more every time I see Marty do it. I have seen Marty perform many times and this was one of the best that I have seen him. I hope he’s back in the lineup next year.