The Travelin’ McCourys In Nashville. 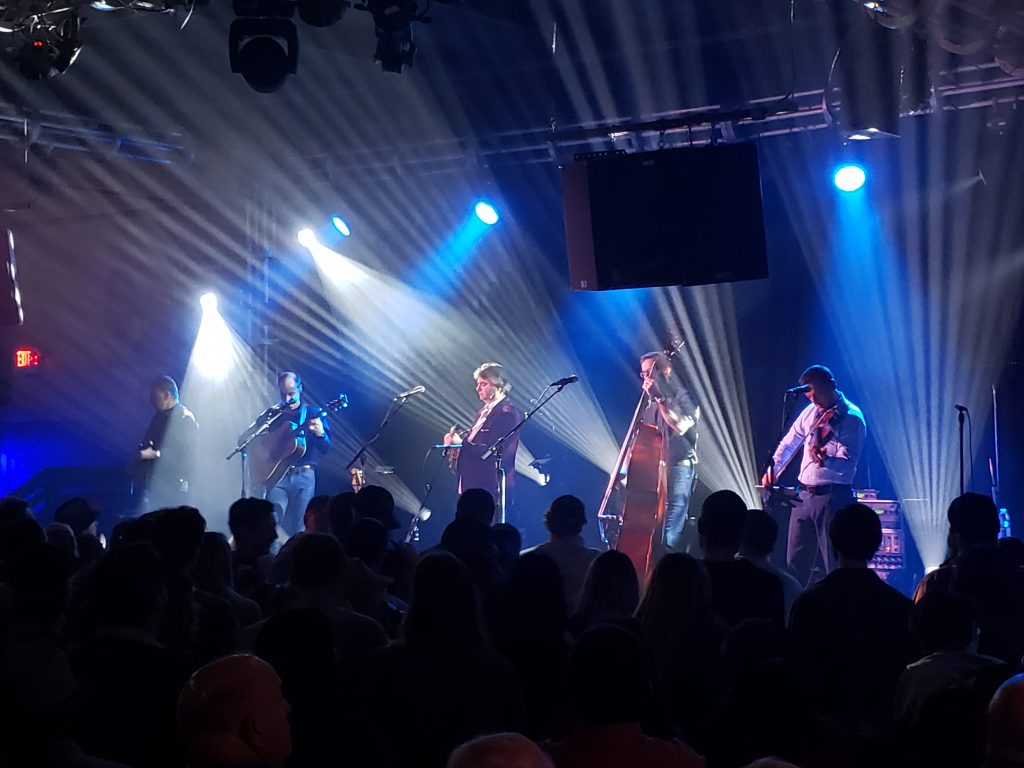 Sound wise the bustling and often sold out 3rd And Lindsley is one of my favorite venues to see a show. Now I had many shows from many music communities to choose from tonight, and I chose Bluegrass for a few reasons. Furthermore, I chose this show because their self titled debut album made my TOP 50 OF 2018 and I thought I had better enjoy one of those bands before the luster of it wore off. I have so much going on in 2019, that nothing lasts very long before the next endeavor overshadows it.

Standing room only here tonight for The Travelin’ McCourys which was totally understandable. In my humble opinion, they are one of the hottest new Bluegrass bands around. Not exactly “NEW” per say…just since they launched their debut album now. Later on in this article another one of my TOP 50 OF 2017 Bluegrass musicians came out to join them.

I decree “not exactly new”, because this band has existed for nine years prior to their debut album release. I remember many of my friends who attend DelFest saying that in 2016, they blew the entire festival away with their live show. They have accumulated an intense following without an official debut release, and THAT impressed me from the get go.

From the starting point of the show the band launched an attack upon the ears with insane instrumentals and many songs off their self titles debut album. They played a very nice cover of Steve young’s song “Lonesome Onry and Mean” that of course was made famous by Mr. Waylon, and that song was sung by the fiddle player Mr. Jason Carter.

As with many Bluegrass bands, the five members take turns singing lead vocals with terrific harmonies and breathtaking solos, like Mr. Ronnie’s mandolin solo on their song “The Hardest Heart” sung by the upright bass player Mr. Alan Bartram.

The song “Borderline” was next which showcased mighty fine musicianship tonight, and displayed the well oiled mechanics of this band here. Just by watching them up close I could easily tell that all five members know exactly what each other is doing time wise.  They followed that song up with “I live On A Battlefield” which also included some great instrumentals, and among the set of classics they covered was the 1972 Osborne Brothers song “Midnight Flyer” which the Eagles also recorded in 1974.

Before playing the Song “Let Her Go” they acknowledged their Grammy nomination, and once you witness their wonderful harmonies on this song, you’ll see why they were. Afterwards they went into a lengthy version of “Long black Veil” choked full of note after note of unique precision, that I enjoy most about Bluegrass. Also, when you hear those timeless classics like “Little Maggie” you know there is honor for the Legends who took the stage before these men.

The band took a short intermission break, since there was no opening act here tonight and that gave me a chance to catch up with notes and such. They brought out one of my 2017 TOP 50 albums Mr. Billy Strings, who came out with them to sing “Streamline Cannonball” a song made popular by Mr. Roy Acuff and also Mr. Doc Watson. Additionally tonight, they brought out Mr. Sam Bush who always the crowd with HELLO MUSIC LOVERS! They played his song called “Back To Ol Kentucky”.

Mr. Del McCourry, father of two of the members came out to front the band for a few songs. I’ll pretty much tell you this much…this show was well worth the twenty dollar door fee. I had more fun with this show than a few major arena shows I can remember! Mr. Del excitedly sang his “Prisoner’s Song” for us tonight, followed by on he recorded in 1963 with Mr. Bill Monroe called “Roll On Baby Roll On”.

The instrumentals continued to emanate forth from the stage tonight by every member of the band, as it pretty much turned into a big jam session. I remember hearing “White House Blues”, and I noted the Travelin McCouury’s song called “Loser”.  While I always enjoy shows here at 3rd And Lindsley, this was the first Bluegrass show I ever experienced here. The lights were TRULY wonderful and the sound was PERFECT for this type of setup, I’ll be returning next weekend for another band.