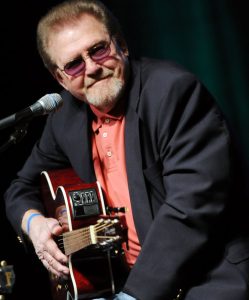 Last night as I was watching the NFL playoffs and resting at home, a good friend of mine called me and sadly informed me that Country Music Songwriting Legend Mr. Sanger D. “Whitey” Shafer died at 85. At this time his family and publicists have not released any reasons for his death, however many people had posted recently that he had entered his final days.

Many many times I have proclaimed on this website that there exists THREE great pillars or foundations of Country Music in this order 1. Songwriters 2. Producers 3. Steel Guitarists. If you have an album that embellishes all three (like the Willie Nelson album Red Headed Stranger), you have a classic album time cannot falter.

Sadly in some form all three of these contributors are becoming few and far between, especially in mainstream Country music. With ( dare I say “OUR”) music communities there DOES exist a plethora of talented younger people that DO those three things, like my friend Mr. Josh Morningstar who recently garnered a cut with powerhouse act Mr. Cody Jinks. He further proved that the craft is still somewhat prevalent, as he nightly performs the song Mr. Whitey wrote with Mr. Lefty Frizzell called “I Never Go Around Mirrors”. Another fine example of a still active songwriter would be my friend Mr. Billy Don Burns, who still garners cuts from younger artists like Mr. Colter Wall.

He was born October 24th 1934 in Whitney Texas, and began playing in school bands before playing with national acts at a later age like Mr. Willie Nelson. In 1967, he moved here to write songs and signed with Blue Crest Music Publishing Company. Working there he wrote two cuts for Mr. George Jones called “I’m A new Man In Town” on the album called “My Country”, and he wrote “Between My House And Town” on the album “if my Heart Had Windows”. His first major cut was in 1969 by Mr. Charlie Walker, and the song was called ‘Rosie Bokay”

He did sign contracts with RCA to be promoted as a solo singer and released two albums called “I Never Go Around Mirrors” and also ‘So Good For So long”. However, commercially he achieved more success as a songwriter gathering many number one hits for Mr. Moe Bandy and Mr. Johnny Russell, as he wrote “The Baptism Of Jesse Taylor and “Bandy The Rodeo Clown” in 1975. Mr. Whitey was extremely instrumental in the continued success of Mr Moe Bandy having penned more than two dozen songs for him.

He had a longstanding friendship with the Frizzell family, having penned mnay songs with Mr. Lefty like ‘That’s The Way Love Goes” for Mr. Merle Haggard. Mr. Corey Frizzell named his son Ryman Shafer Frizzell after him, and if you see the little man around town your heart will melt as you see him. VERY adorable lad that plays a guitar with everyone. Just recently my friend Mr. Corey stopped by my inbox to send me this quote:

Everyone knows the talent of Whitey Shafer, or undoubtedly heard it. He was best friends with uncle Lefty Frizzell the last six years of his life, helping to revive his career and passion to write again. Ironically we became very close the last six years of his. He would always say, “I’ve got me another Frizzell”. I loved him. My wife and I made him the Godfather to our three year old son, Ryman Shafer Frizzell, whom bears his namesake. Whitey and Tracy came to the hospital when Ryman was born. I asked Whitey if he wanted to hold him. He said in Whitey style, “I didn’t even hold my own son”. But he went on and held Ryman anyway. He was honored we used Shafer as Ryman’s middle name. He said, “I’ve never had an offspring named after me”, we just laughed. We will miss him and carry his memory with us…Ryman will carry it further.

After Mr Lefty passed away Mr. Whitey wrote the song called “Lefty’s Gone” cut by Mr. George Strait on the 1985 album “Something Special”. Mr. George Strait took many more of his songs to the Country charts in the 1980’s, two of the most popular ones were “Does Forth Worth Ever Cross Your Mind” from the album of the same name, and “All My Exes live in Texas” off the “Ocean Front Property” album. In 1989, he was inducted into the Nashville Songwriter’s Hall Of Fame”. Four songs from that particular Strait album were written by him.

In the 90’s and on he amassed over 500 recordings by Mr. John Michael Montgomery, Miss LeAnn Womack, and Mr. Kenny Chesney. One of my favorite songs he wrote was recorded by Johnny Bush, and was called “Rainbow In My Daddy’s Eyes”.