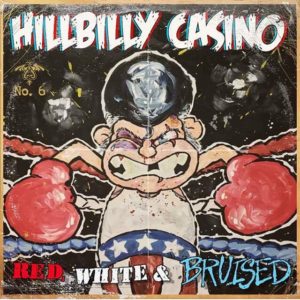 Hillbilly Casino is indeed a name I mention many times on this website, and with damn good reasons. I mean honestly our paths have crossed MANY MANY times on the road at festivals like the one I’m currently half done with Muddy Roots and I reported on their sets at all of the Nashville Boogie.

I missed their album release show at the Exit Inn although I did write and article for it, hell one year at the 5 Spot I celebrated my birthday with them. Needless to say I been around Mr. Geoff Firebaugh, Mr. Ronnie Crutcher, Mr. Nic Roulette and Mr. Matt Arnn for many years.

One thing many critics complain about with this genre of Roots Music is the lack of growth many of the artists that represent it exhibit. Well, I challenge that, and I’ll explain to you why in this album feature. I cover many different genres on this website and it’s because I personally love them all. I wouldn’t waste my time writing about music I wouldn’t play in my truck stereo.

If you claim this band has lack of growth you aren’t stopping to listen to the music closely enough, and by ALL means you aren’t going to their LIVE shows. This band plays like a well oiled machine, and attacks your eardrums like a freight train. I think Mr. Nic is one of the most charismatic front men in the independent circuit and one of the most enjoyable to watch sing.

So Red White And Bruised once again features “Punchy” their mascot and one hell of a fun marketing scheme on the front cover, and for being independently recorded and mixed it sounds great. Songs like “She’s Got Tricks” have a good Rockabilly beat and bass thump from the Vanilla Gorilla…but this album has many different sounds to it.

Three of the songs on this new album were on the LIVE album they recorded a while back at the Exit Inn, one of those was the fast paced song they play in many sets called “Jibber Jabber” . Another was “Dog On A Chain” and the last song was called “Trainwreck”.

This album is choked full of fantastic guitar solos and fast easy to understand lyrics that don’t take a lot of thought, now trust me I LOVE those long drawn out acoustic songs that make me think, but I also LOVE the fast, hard easy to understand Rockabilly sound too. I get into all kinds of different moods at certain times.

“When She Kissed Me” is just a simple jamming swing song you can dance to, in fact this whole album pretty much is that way. And if you cannot ascertain growth from this album..you aren’t listening close enough give it another spin! “I Got More Blues Than Green” is a song EVERYONE can relate too that works. Most everybody has more bills out than money coming in for sure. Finally the last song “Troubles” was my personal favorite song on this album just because of the sound, it was a true Honky Tonk song.

Then you have songs about failed relationships like “It’s Not Me It’s You” that have different sounds altogether on this album. You have Country which this song had a sound like, Rockabilly and just plain out rock and roll like “Knocking At Your Door” ..it’s just damn good American music folks! You can order YOUR COPY on their website HERE.