The Barnyard Stompers And The Dallas Moore Band At Spillway. 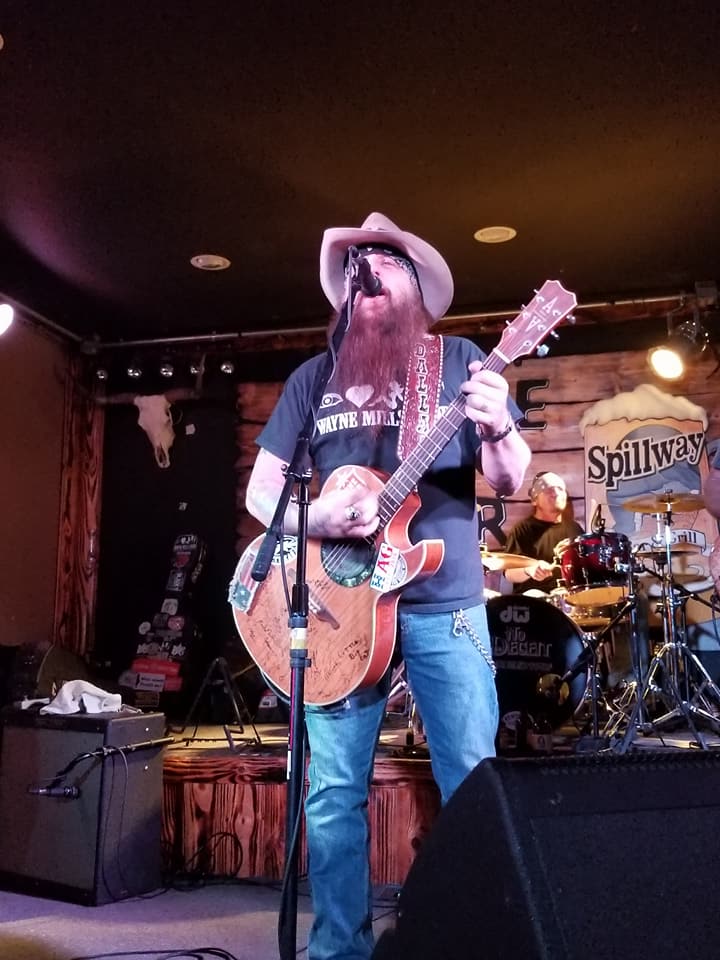 Folks like many times before I am here in Bowling Green at the The Spillway Bar And Grill on a wonderful Saturday night for some real Outlaw Country Music. the Barnyard Stompers are a duo I haven’t ran into for several years in person however I did write a great article for their new album OUT NOW.

In the words of Mr. Kasey we got merchandise available and every ten dollars gets us seven miles down the road, so if you like it buy it all. If you don’t like it buy it anyways because it gets us the fuck away from you! The food is always top notch good and the atmosphere makes this bar an easy bet to work a show article like this one.

They played originals and covers tonight both, and began with “Ain’t Living Long Like This”, and went right into the cover of the “Auctioneer Song”. That’s originally a 1958 Leroy Van Dyke song, that he is well known for, then they went into the song called “The Devil’s Horn”.

‘Heavy Load” is one of  their truck driving songs they have that’s an original before they went into “Luchenbach Texas” from Waylon Jennings.  They went into their adult themed song called “Truck Drivin Son Of A Bitch”, and now let’s watch a video from the songs:

Rambler, followed by “The Saw Is Family”.

They then played a cover of ‘Country Boy Can Survive” and played the song “Payback”, all the while playing a crazy wild show complete with drunken donkey stories and harmonica mic feedback from the monitor. We talked about being old and life in general, before they played “Roll On”.

They closed their set with a cover of “Titties And Beer” along with a song they made a video for called ‘Outlaws With Chainsaws Part 2 The Revenge”. Their final song was called “Corn Liquor”.

Mr.Dallas Moore is always a sure bet for fun, as we both are fresh off Muddy Roots Music Festival and Americana Fest as well. I’m going to include his promo for his new album Mr. Honky Tonk on this article here, as well as his video from Muddy Roots. He’s up right now doing soundcheck.

He began with several cover songs here tonight ‘Can’t You See”, “Whiskey River” and “Freeborn Man” all of which included some amazing guitar solos and fancy pants string work on Mr. Dallas part. He’s just plain out simply one of the finest in this business in every aspect of the part.

Right now as I write he is playing “Twisting Through Texas” for us taking us on a rocket ride through his original material, as he usually does. Mr. Dallas and his crew are insanely hard working, in fact they already played a show tonight in Ohio before they even came here to play…wow..

He bellowed through “Bottle And A Bible” and right now he is tearing this place apart with “Raising Hell And Slinging Gravel”. Playing songs off of his LIVE album he recorded from the Bulluiet County Jail in Kentucky recently were next with “One More Ride”.

“Shoot Out The Lights” was next off the Dark Horse Rider album, as he prepares his new album aptly called “Mr. Honkytonk”. “You Know The Rest” was his next song from his original list of songs.  We also went ‘Up On That Mountain” as Mr. Dallas and I once did at Altamont in East Tennessee.

He played five new songs for us tonight off the forthcoming album including “Mr. Honkey Tonk” one called “Nice And Slow” and one his wife named by a saying she brought up called “Home Is Where The Highway Is”. You know nobody in this business hits the highway harder than Mr. Dallas.

“Burns Like Kisses” was another new song and “In Between Bridges” was the last, I’m pretty sure those were the names and I’ll go back and correct anything I got wrong. He then played an old acoustic song as a personal favor to an old friend that recently got engaged, and then proceeded to honor our fallen hero Mr. Don Williams.

He played a medley of Don Williams classic like “Tulsa Time” off of the 1978 album Expressions, it was written by Danny Flowers. He played “Some Broken Hearts Never Mend”, and “Amamnda”. Tonight at the Spillway not a darn one of us minded the wide array of cover songs from this fine musician.

We all had a blast tonight, some truly fine music by two great bands and some damn good food. All in All I can honestly say I had a pretty good year of live music, I may have some more events coming up but I’m going to focus on catching up on bills and personal stuff so that I can bring YOU MORE great music reports in 2018.