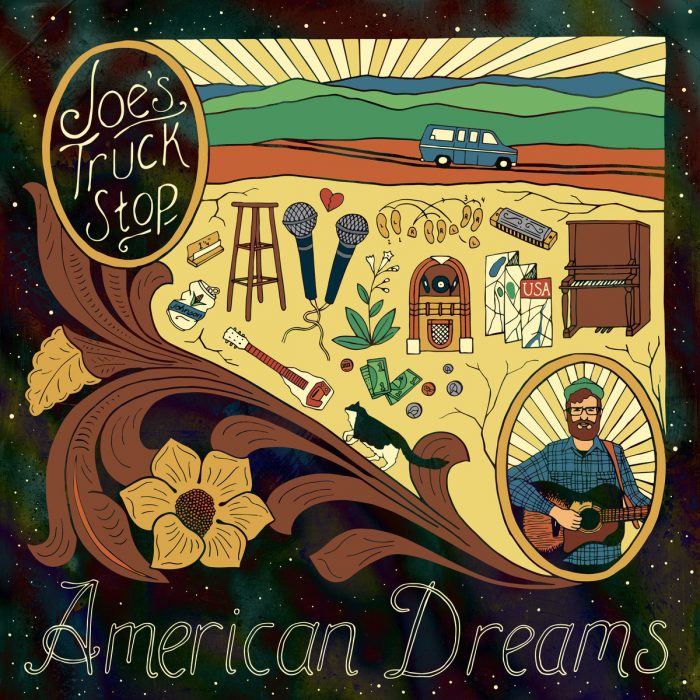 I first came across Joe’s Truck Stop with the 2014 EP release called Free Showers.  It came out around the height of the punk fueled string band craze and it fit in well with that genre.  It felt like a bajo fueled country record with some attitude. Fast Forward to 2018 and the band are finally releasing their first full length album called American Dreams.  There have been many lineup changes since the EP, but they’re still very much a banjo fueled country band. The music is calmer and more country with a western swing feel to it this time around.  This is a good change as the scene has changed since 2014 and more traditional country is more popular than the punk fueled country that was featured on the EP.

One of my favorites on this record is “Banjo Pickin’ Tobacco Spittin’ Gal”.  It’s a bluegrass fueled country song that has humor and is just plain fun. This one will have toes tappin’ at live shows for sure.  “Don’t Go To College” is a cautionary tale about learning more about the world before diving headfirst into it. It’s a lesson we could all learn eventually.

“The High Road” is another fast country tune that is a fun toe tapper.  I love the duel solo by Andrew McPheter’s banjo and Ben Sweeney’s lead guitar on this one.  “(Don’t) Put A Nickel In The Jukebox” goes into full on honky tonk territory with a sad country song about not being able to stand hearing sad country songs.  It doesn’t get sadder than that. “Knockin’ Boots” is a good dancing song, however you like to dance. Finally, “American Dreams” showcases Joe Macheret’s songwriting abilities.  I love the reference to Hank Snow’s “I’ve Been Everywhere”. It seems like something the band could have fun with live.

American Dreams shows what could be a promising future for Joe’s Truck Stop.  Hopefully we won’t have to wait another 4 years for the next release because I look forward to hearing more.  I highly recommend this album to anyone looking for a good traditional country record with some killer banjo playing that really sets this band apart.  American Dreams is out now on Joe’s Truck Stop’s bandcamp and is available on CD May 11th.